Volcanoes threatening the world in 2018 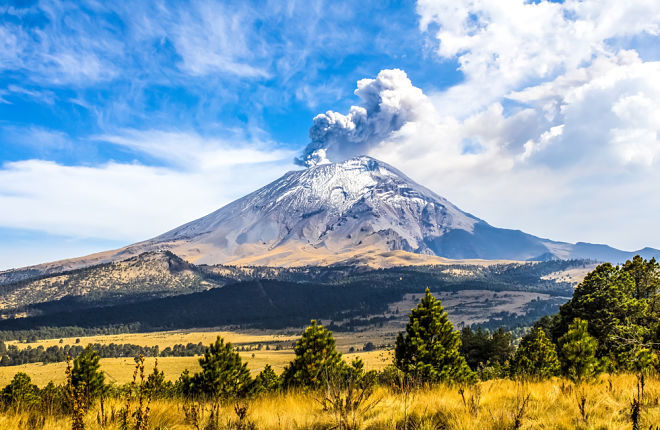 The eruption of the Agung volcano on the island of Bali caused a worldwide media interest, although eruptions in Indonesia are not new. Of the 139 active volcanoes in country 18, an increased level of anxiety has now been assigned. This indicates increased seismic activity, deformation of the earth or gas emissions.

On the whole planet in any week of 2017 erupted from 14 to 27 volcanoes.
Most of the volcanic activity was observed on the Pacific ring of fire, the area around the Pacific Ocean, where several tectonic plates are encountered, causing earthquakes and chains of volcanoes in the subduction zone.

Also, eruptions occur on volcanoes in the interior of the continent, for example, Ol-Doinho-Lengai in Tanzania, or on oceanic islands, for example, in Hawaii.

Many volcanoes are hidden on the seabed. The most active underwater volcanoes are located on the island chain of Tonga-Kermadec in the southwest of the Pacific Ocean.
Eruptions, known in modern history, do not go to any comparison with the largest in the history of the Earth. Nevertheless, frequent small and moderate explosions represent a permanent volcanic threat. Today around 800 million people live within a radius of 100 km, and 29 million within a radius of 10 km from active volcanoes.

The volcanic threat is highest in Indonesia, followed by the Philippines, Japan, Mexico and Ethiopia. So, what volcanoes should be closely watched in 2018?

One of the least known, but the most active volcanoes in Japan, Kirishima, is a group of several volcanic cones, the eruptions of which have been recorded since 742. The eruption on one of the Simmoe cones in 2011 was the largest on Kirishima in more than 50 years. Simmoe exploded for the first time in six years in October, throwing white smoke streams 200 km above the crater. Now the level of anxiety on the volcano remains elevated.

Merapi is one of the most dangerous volcanoes in Indonesia due to its frequent eruptions and densely populated slopes. The most deadly in the 21st century was the eruption of Merapi in 2010. Then nearly 400 people died.

This snow-covered volcano exploded twice since the beginning of the settlement of Iceland, including the largest explosive eruption in the country in 1362 and the other in 1727-1728. In both cases, the eruptions were followed by huge and deadly floods, when meltwater rushed from the subglacial lakes.
Now, it seems that Araivayekudl wakes up. A small seismic tremor inside the volcano has been fixed since August 2017. In November, a dip appeared inside the main crater – this phenomenon usually results from the melting of ice under the surface due to accumulated heat.

The “smoking mountain” is located 70 km southeast of Mexico City and it is the most active volcano of the country. The volcano is now erupting – and has been doing so incessantly since 2005. At Popocatepetle, a lava dome grows, explosions are heard, streams of ash ascend to a height of several kilometers and weak ash falls.

The snow-covered Villarrica volcano is one of several volcanoes around the world that has an active lava lake. The gradual increase in the seismic activity and activity of the lava lake, which produces lava fountains with a height of up to 150 meters, has been documented since mid-November 2017.

Kilauea volcano on the Big Island in Hawaii spits out basalt lava continuously for 35 years, and there is no reason to expect that the eruption will end soon. The volcano continues to erupt and lava flows from the crater, which periodically enters the ocean.

This volcano showed abnormal seismic activity in the past year, but to predict how it behaves in the current none of the scientists is taken. This volcano is a lottery. The timing of another eruption has already come, but whether it will be unknown.