Warm waters threaten the Arctic with a catastrophe 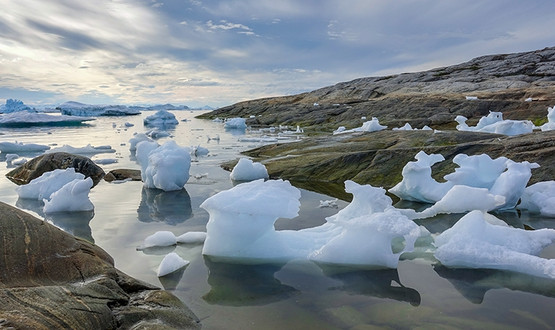 More and more warm water enters the central part of the Arctic basin. While it is still in the deep layers of the water column of the Arctic Ocean. However, if the thermal spot is released, it will become destructive for Arctic sea ice.

In the Arctic waters it becomes warmer and the ice melts faster and faster. Scientists have bad news: they were able to prove that a thermal stain had accumulated in the depths of the Arctic Ocean. This can lead to fatal events in the future – scientists call it a “heat bomb”.

Mary-Louise Timmermans of Yale University, along with her colleagues, published a study in the journal Science Advances. They managed to detect a significant heating of water in the Canadian basin – the water area, which is located north of Alaska. According to the researchers, water layers have almost doubled their temperature in the last 30 years.

Scientists suggested that the main reason for the appearance of a thermal spot is the abnormal heating of waters on the surface of the Northern Chukchi Sea. This sea feeds the Canadian basin and in it the ice melts long enough for a fairly large area. The meltwater, warmed by the sun, moves north, following the rose of the winds. Having reached the Canadian basin, warm meltwater descends, and over it cooler and denser layers of water settle. It turns out that under the layers of cold salt water there is a warm layer. These interlayers of the water column are not mixed together due to the difference in salinity – this phenomenon is called “vertical stratification.” But one day, as the researchers believe, the warm waters will still begin to rise to the surface and melt the ice covering the Canadian basin.

Scientists have to conduct new research to understand how the “thermal bomb” will affect the future in the Arctic Ocean and global warming in general. Moreover, not all researchers agree in assessing the threat from warm waters.

The works of Russian scientists

In Russia, many studies of the Arctic basin are carried out. The Arctic is a strategically important region. But, apparently, the hydrological picture observed along the coastline of Russia differs markedly from the situation described by scientists from Yale University.

So, portal 360.ru previously reported that a violation of the established stratification of water due to the receipt of a large amount of heated water in the Arctic Sea is observed in the Barents Sea. “Warm salty water in the sea prevails and destroys the ice,” the newspaper writes. However, before the disaster is far away.

Head of the Laboratory of Climatology of the Institute of Geography of the Russian Academy of Sciences Vladimir Semyonov said that scientists have been observing this phenomenon for several years. The melting of ice in the Arctic, according to Semenov, triggered a feedback: less ice – less and fresh water. Fresh water is lighter than salt water and is located in the upper layer of the glacier, isolating the Atlantic water, and all its heat goes to the upper layers. This phenomenon is important, the scientist says, but will not lead to catastrophic consequences. To some extent, the regional climate will change, but this will not affect the ecosystem of the whole of Russia.