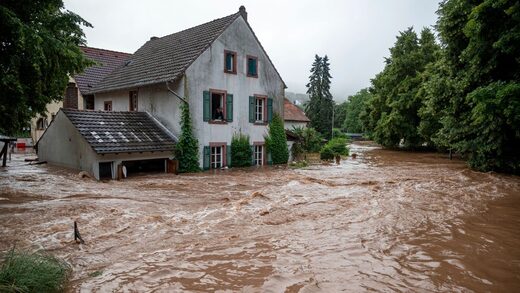 A slow-moving storm system over Western and Central Europe this week broke records and brought flooding to the region — and meteorologists warn that the storm is not done bringing wet weather.

Officials said Wednesday that firefighters continue to search for a man missing in the eastern German town of Jöchstadt after he was swept away by a violent flood Tuesday night. Jöchstadt is located near the Czech border. A man went missing after trying to protect his property from rising waters.

A disaster warning was issued in Hof County, also near the Czech border, as heavy rains flooded basements, uprooted trees and cut off electricity. 3.34 inches (85 mm) of rain fell in 12 hours.

The flooding was not limited to eastern Germany: After another downpour and thunderstorm on Tuesday, several areas in western Germany reported flooding.

In the nearby town of Erkrat, residents were warned not to shower or use washing machines after rain overwhelmed the sewer system.

Flooding was also reported in the A44 tunnel that runs through Düsseldorf south of the airport. The area reportedly received 1.89 inches (48 mm) of rain in 12 hours.

Several rivers and streams overflowed in the Netherlands and Belgium due to heavy rains. Residents throughout the region were warned to stay away from these bodies of water.

Dutch media showed people being rescued from a historic mill that was partially flooded by floodwaters estimated to be about 5 feet (1.5 m) deep.

Due to rain and thunderstorms in recent days, some Western and Central European cities are already reporting rainfall above normal for July.

Four people were killed and 30 are missing after homes collapsed during severe flooding in Germany.