What is dangerous Yellowstone superwolkan 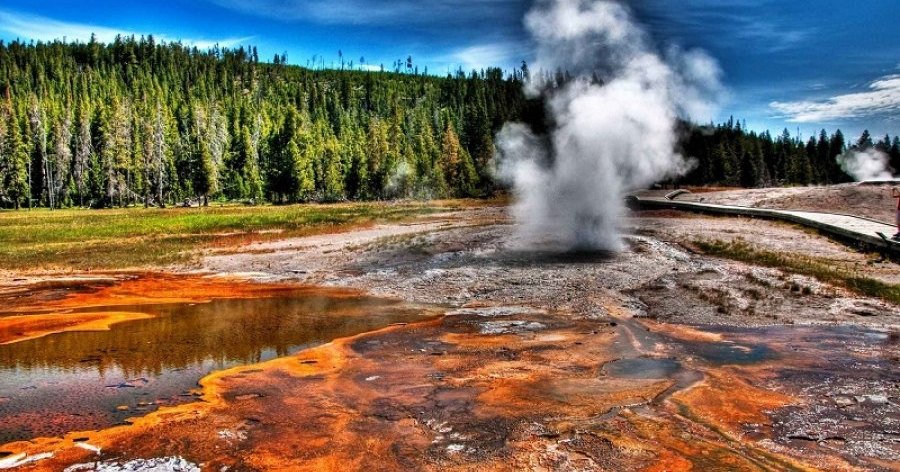 The Yellowstone caldera, hiding under the Yellowstone National Park in the United States, is a huge crater measuring 55 to 75 km, filled with incandescent magma. The caldera is a volcanic basin with steep walls and a more or less flat bottom, which is formed as a result of a strong eruption or collapse of the walls of the crater of an active volcano. At present, it is the Yellowstone volcano (which is by no means the largest on the list) considered the most “ripe” for a potential eruption.

According to experts, the eruption of such a volcano would result in the ejection of hundreds of cubic kilometers of molten magma, which would burn out the entire landscape within a radius of 100 km and after it turned Wyoming and three surrounding states into a territory covered with a meter layer of volcanic ash. But the destruction will not stop there. Dust and volcanic gases released by the eruption will cover the Sun with an impenetrable veil and will pile the world into a “volcanic winter” that can last for decades and lead to the systematic extinction of a huge number of varieties of modern flora and fauna. The last time the volcano erupted 640 thousand years ago.

Knowing that the threat is by no means illusory and the catastrophe can occur literally at any time, NASA scientists have developed a plan to prevent a catastrophe. They propose to pump out heat from the caldera, preventing its heating. The resource will not be wasted: the geothermal energy can easily be turned into electricity. All this will be done with the help of a stream of water that will be fed through the borehole into the hot rock and, heated, return back at a temperature above 300oC in the form of hot steam and hot air. After the water has cooled, it can be fed back to the ground – a resource-intensive and ecological clean cycle is obtained. This technique is already in use today, and therefore the technology looks very reliable, at least on paper.

In the coming years, it is not worth waiting for the launch of the campaign. However, researchers hope that their work will draw attention to the problems of super volcanoes around the world. “It’s important to pacify the element before it destroys 99% of the entire humanity,” said Dr. Brian Wilcox, aerospace engineer at the NASA Jet Propulsion Laboratory in Pasadena, California, in an address to the press.