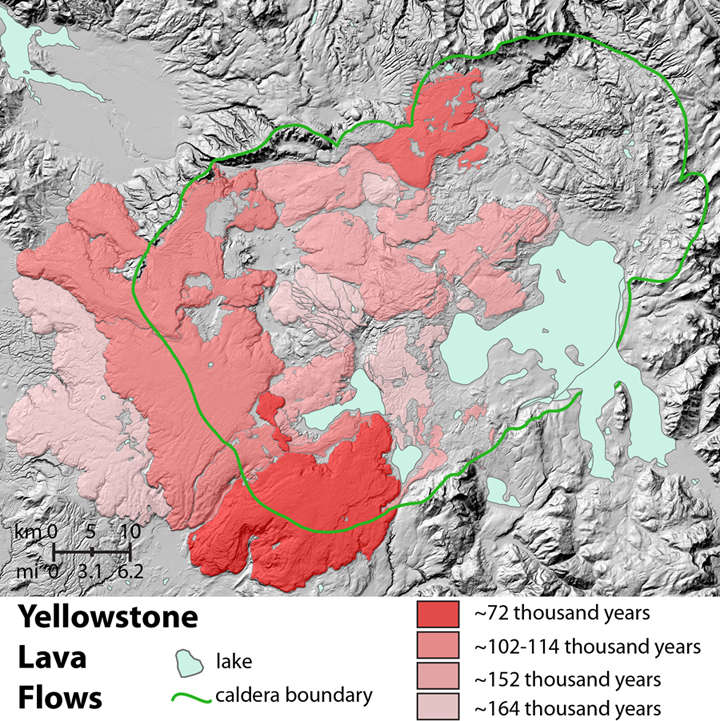 The Yellowstone caldera is essentially a giant, steam-covered steam boiler, and it’s so huge that you can only see it from a near-earth orbit. Its crater reaches a size of 72 kilometers, and its caldera contains several tens of thousands of cubic kilometers of magmatic material. Niagara Falls would take 624 years to fill the caldera of this volume.

What will happen if this monster explodes, shaking the world with a terrible volcanic eruption?

Who will live, who will die – and will the United States of America survive? We talked with one of the country’s most respected volcanologists to get the latest information about the future of the world’s most famous super volcano.

Now a two-stage magma chamber is at rest. According to the scientist from the Yellowstone Observatory of the Yellowstone volcano, Dr. Michael Poland, at present the volcano may not have enough energy to produce an over-eruption.

“Now most of the body of the Yellowstone magma has partially solidified, and you need a lot of magma to feed the great eruption.”

For most of its life, the region has been characterized by extensive lava flows and much more often by hydrothermal explosions, suggesting that any eruption in the future will be repeated much less frequently.

The chances of superculanic paroxysm are currently about 730,000, which makes it less likely than the catastrophic impact of asteroids.

However, a sudden injection of a new magma from below, or a sudden weakening of the geological layers that cover it, may be enough to cause a sudden depressurization event, in consequence of which the entire volcanic accumulated in the depths will burst as a powerful explosion.

What will happen next is somewhat hypothetical, but the frightening history of Yellowstone gives us the key to understanding the consequences. We are thinking about the worst scenario, so let’s assume that all of its magmatic pot was emptied in a colossal super volcanic explosion.

The most explosive eruption was his first, which produced 2.5 times more volcanic material than the eruption of 1980 on Mount St. Helens. Even the most recent explosion created an ash column of an eruption so colossal that it covered about 60 percent of the United States with a thick layer of ash.

So, let’s say that such a powerful explosion is repeated today: what will happen to the United States and the world?

It is unclear how such warning organizations as the USGS will operate, but shortly before the eruption, the earth around Yellowstone National Park will rise, the level of the earth’s surface will rise.

The hydrothermal system, including geysers and geothermal pools, will quickly heat up to a temperature above boiling, and they are likely to become extremely acidic – more than usual.

A swarm of earthquakes will be discovered, heading toward the central point, indicating that the magma is rapidly moving through the bark. Then the cover of the magma chamber covering the caldera will collapse and the most powerful volcanic eruption that the world has not yet seen will occur.

A huge column of ash and lava will rise up to a height of about 25 kilometers. Clouds of ash cover the sky, and for many kilometers around will fly lava bombs that destroy everything around. This will continue for several days and the ash will gradually spread over the stratosphere.

Huge pyroclastic flows will flow through Yellowstone Park destroying all life on its way.

Pyroclastic flows extend up to 15 kilometers (9.3 miles) from their source, but theoretically they can spread to 100 kilometers (62 miles) if the super volcano explodes.

This is, in fact, the length of the Yellowstone National Park, so if the muzzle of a new eruption appeared right in the center, and the pyroclastic flows were particularly energetic, many in the park would have died either from pyroclastic flows or from the collapsing caldera roof.

On average, every day in the park there are about 11,000 visitors, based on an annual visit of 3.8 million people. In the summer months, visitors are much more, so the summer eruption will be much more deadly.

When pyroclastic flows and ash deposits settle and cool, they may seem harmless, but it is not. They accumulate on the hills and slopes, can be mixed with mud, streams of water after the rain and turn into rapidly moving cement slurries, called lahars. Everyone who falls into such a lakhar will die.

However, the most dangerous aspect of the eruption is the loss of ash, both locally and globally.

Inhale it, and it will rip your lungs and form vitreous cement. This ash is also about six times denser than water, which means that most of the buildings will collapse under their weight, when ash accumulates on the roofs. Our interlocutor Poland says that “even a few dozen centimeters of wet ash can lead to the collapse of weak buildings.”

Roads and sewer systems will become clogged and destroyed, water supply will be polluted, and electrical networks will fail. Millions of houses can become uninhabited.

In this sense, those who take refuge in Montana, Idaho and Wyoming are at greatest risk of harm. The eruption can last for months and people in these states will have to survive in incredibly harsh conditions.

An area of ​​about 80 km (50 miles) around the volcano’s mouth will be covered with a layer of ash of 3 meters (about 10 feet) in just a few days. Simulation also showed that superelementation can bury Salt Lake City and its surroundings under a layer of ash a meter tall. 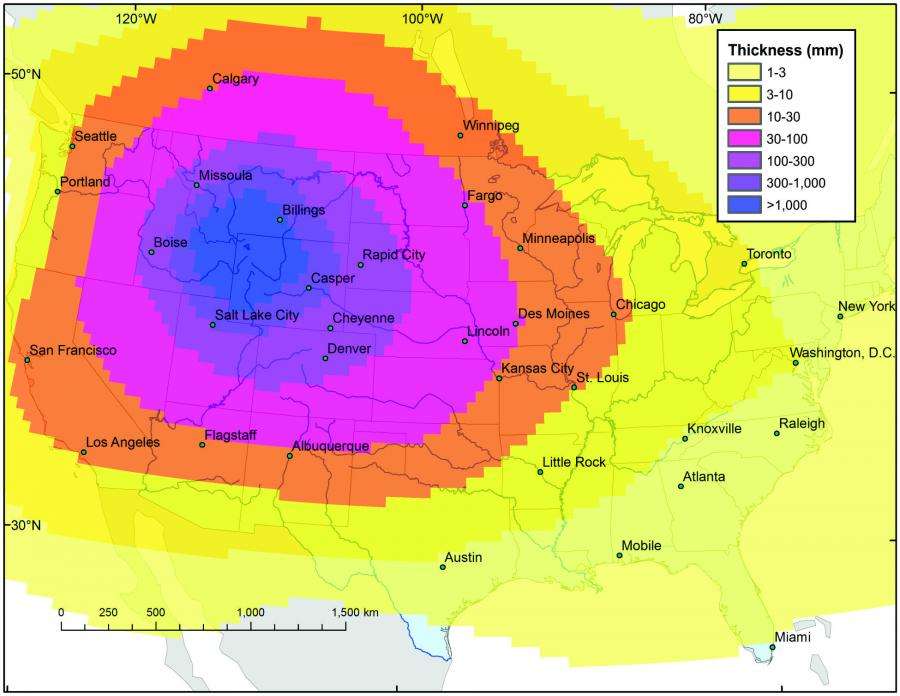 In another place – say, San Francisco, Los Angeles, Seattle, Minneapolis and Chicago – will drop about 3 centimeters of ash. Within a few days, a thin layer of ash could reach Miami, New York and Toronto and it will be enough to make cars break down and turn sources of drinking water into poisoned swamps.

Flights will be stopped over the entire territory of the United States for at least a few weeks and the National Guard and probably the military will almost certainly be mobilized to help evacuate many tens of millions of people from the affected region.

The death toll is extremely difficult to predict, but Poland suggests that “if people were present in the immediate vicinity of an eruption, say, for several dozen to several hundred kilometers – they would be in danger.”

But there is another threat – pollution of the atmosphere. 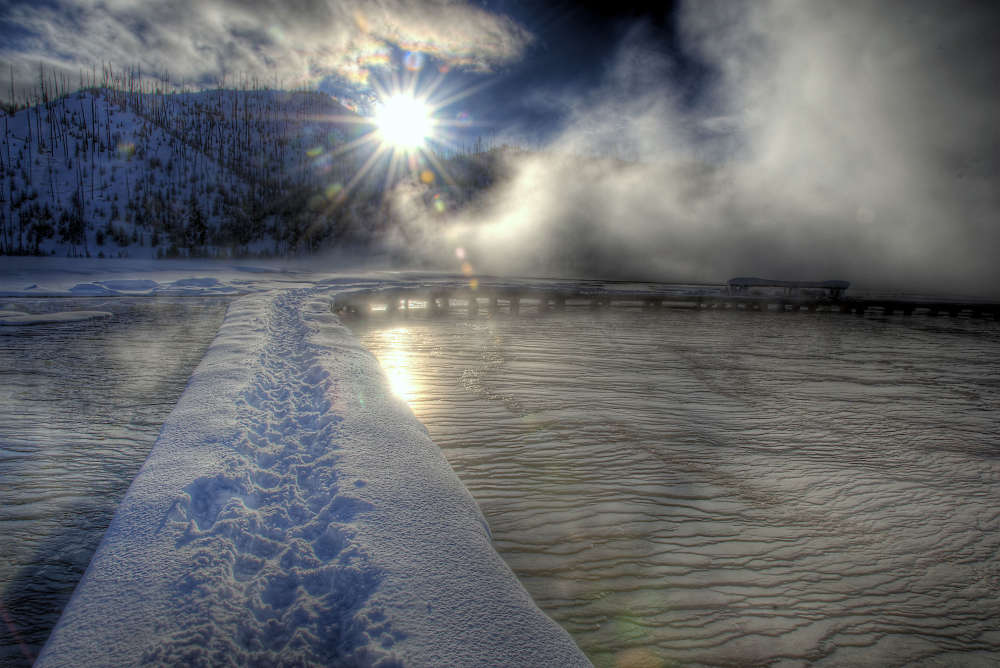 The release of ash into the stratosphere will cause the sky to darken and cool the planetary temperature. If the eruption is particularly rich in sulfur – an effective sunlight blocker – then the temperature will drop a few degrees and in the next few years there will be no summer.

“Probably, there will be significant cooling over the years,” Poland explains, “but how long this will last and how much cooling will be, I can not say.” I’m not sure that anyone can. ”

If in 1815 a much smaller, but very sulfur-rich volcanic eruption occurred in Tambor, then in any case the explosion in Yellowstone for many years will be much stronger “to change the global weather conditions and will have a huge impact on human activities,” according to the USGS statement.

The paths and duration of the monsoon would change. The formation of the tropical cycle will become much more unpredictable for some time, and the spread of diseases transmitted through water can be very widespread.

Agriculture will also suffer, which can seriously undermine the supply of food. This would lead to general economic damage that would be serious: a recent FEMA assessment of the consequences of the Yellowstone explosion assumes a total US loss of $ 3 trillion, which is about 16 percent of the country’s total GDP. To represent this in the future, this is $ 400 million more than was lost during the recent global recession.

The USGS reports in the report that “scientists in our time do not have the predictive ability to determine the specific consequences or duration of possible global impacts of such large eruptions.”

Poland is confident that this will not lead to the destruction of civilization. “This does not mean the end of life on Earth,” Poland says. “In fact, this experiment has already been launched, but very few people understand this.”

He points to the eruption of Toba, which occurred 74,000 years ago, and humanity survived it, and “they then did not have the advantages of technology!”

However, the professor himself agrees that it is impossible to accurately predict all the consequences of the Yellowstone eruption, since it will be so global and grandiose in scale event that its consequences for our world can be very unpredictable and catastrophic, and we can only hope that our modern technology will help humanity to cope with these consequences and survive in the world after the eruption of the Yellowstone supervolcan.