When volcanoes blow up – the world shudders 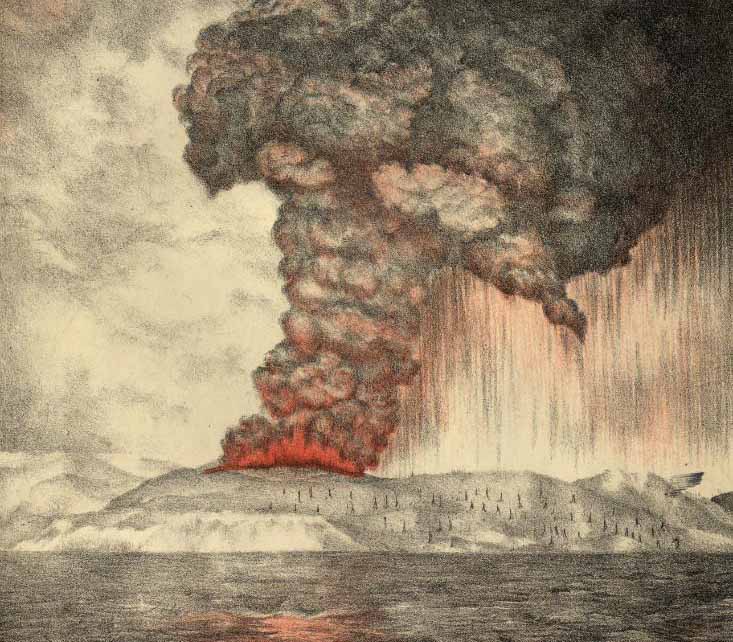 On August 27, 1883 Earth generated a sound which loudness was not surpassed since then. The sound was born on the island of Krakatau located between Java and Sumatra in Indonesia, at 10:02 in the morning local time. It was heard in 2080 km on Andamansky and the Nicobar Islands (“surprising sounds, as if firing from guns were heard”); in 3200 km in New Guinea and Western Australia (“a series of the loud sounds reminding artillery in the direction on the northwest”); and even in 4800 km in the Indian Ocean on the island Rodriguez near Mauritius (“the sound going from the East, as if the remote roar of heavy guns”) [1]. In total it was heard by people in 50 various geographical points covering 1/13 part of the globe.

Think of as far as it is surprising. If in Nizhny Novgorod somebody tells you that he heard a sound from Moscow, you look at it with suspicion. But Nizhny Novgorod is in 400 km from Moscow. And in the described case everything was so as if the person who was in Chita heard the sound going from Moscow. With a speed of movement of 1233 km/h, the sound on overcoming such way needs about 4 clocks. It was the most far extended sound in history known to us. 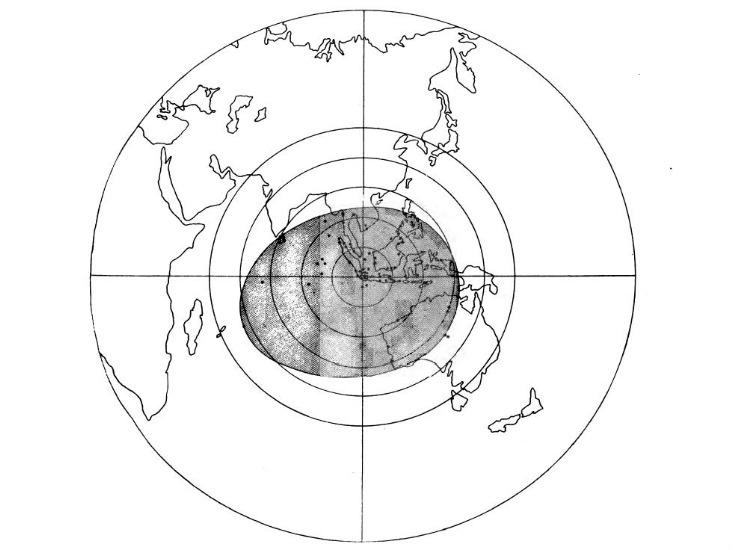 From where it was possible to hear eruption

So could create so loud explosion? To Krakatau there was a volcanic eruption, so potent that it broke off the island, and released a column of the smoke which rose in the atmosphere by 27 km agrees observing to his geologist. From this it is possible to calculate that smoke was torn from a volcano with a speed of 2500 km/h – that is, about 800 m/s. It is twice more than sound speed.

Explosion generated a deadly tsunami with waves 30 m high 165 coastal villages and settlements Were washed away and completely destroyed. The colonists from the Netherlands filling at that time in Indonesia estimated the number of the victims in 36 417, but by some estimates, them there could be about 120 000. [2, 3]

The British vessel “Lock Nor” during eruption was in 40 miles from Krakatau. The captain wrote down in the magazine, “So loud there were explosions that at a half of my team tympanic membranes were injured. My last thoughts were about my dear spouse. I am convinced that the Doomsday came”.

But sounds arose not because of doomsday, and because of air pressure fluctuations. The barometer on the gasworks in Batavia (nowadays Jakarta), in 160 km from the place of explosion, recorded increase pressure upon 6 mm hg. It is about 172 dB of sound pressure, very loud noise. During the work as a jackhammer you are exposed to pressure in 100 dB. A pain threshold of the person – about 130 dB and if you unsuccessfully got up near a jet, you would undergo pressure of 150 dB. (Increase by 10 dB approximately is estimated by the person as double increase in loudness). At eruption of Krakatau 172 dB apart in 160 km were registered. It is so fantastically loud that practically is on border of a concept of “sound”.

When you sing a song or pronounce words, you force molecules of air to hesitate tens or hundreds of times forward and back a second because of what air pressure in some places increases, and in others decreases. The sound, the more intensively fluctuations is louder and the it is more than fluctuation of pressure. But there are restrictions for volume of sound. At some point fluctuations become too big, and the lower level of pressure falls to zero – to a vacuum – below will not fall any more. This restriction in an Earth’s atmosphere is reached approximately at 194 dB. Even more loudly, and the sound will not extend by air any more, it will bear air with itself(himself), creating the moving area of high pressure, a shockwave.

Closer to Krakatau the sound exceeded all restrictions, and created such potent rush of air of high pressure that it tore tympanic membranes at seamen in 40 miles. Having passed thousands of kilometers, having reached Australia and the Indian Ocean, fluctuations of a sound decreased, and began to remind the remote shot. After 4800 km of a travel the wave of pressure became too silent for a human ear, but continued to extend and further, several days being reflected on all globe. The atmosphere ringed as a bell, it is imperceptible for us, but is noticeable for our devices.

In 1883 weather stations in the cities of the whole world used barometers for tracking of changes in atmospheric pressure. In 6 hours 47 minutes after eruption of Krakatau, the splash in pressure was registered in Calcutta. In 8 clocks the impulse reached Mauritius in the West and Melbourne with Sydney in the east. In 12 clocks the impulse was noticed in St. Petersburg, and then in Vienna, Rome, Paris, Berlin and Munich. In 18 clocks the impulse reached New York, Washington and Toronto. Incredibly, but the whole five days after explosion weather stations in 50 cities recorded this unprecedented splash in pressure repeating approximately each 34 hours worldwide. Approximately so much time is required to a sound on a travel around all planet.

Generally, pressure wave from Krakatau bypassed the globe 3-4 times in each direction. In the cities about seven splashes in pressure as they felt the shockwaves which came to them on both sides were registered. The tidal stations in India, England and San Francisco noted increase in ocean waves along with an air impulse, and such effect was noted for the first time. It was the sound which more narrow could not be heard, but it continued to travel round the world – this phenomenon was called “a great air wave”.

Recently tourists shot improbable video of a volcanic eruption in Papua New Guinea. If to look narrowly, from it it is possible to gain an impression about the wave of pressure created by a volcano.

The volcanic eruption generates sudden surge in atmospheric pressure. It is visible how it moves by air, and condenses on the way steam in clouds. The shooting videos, fortunately, were rather far from eruption, and the wave of pressure needed some time to reach them. At blow of a wave about the boat, approximately in 13 seconds after explosion, it is heard the loud sound similar to a shot, together with an air rush. It means that the boat was approximately in 4,4 km from a volcano. Something similar happened also to Krakatau, only then “shot” was heard not in 4 km, and in 4800 km from a volcano that shows incomprehensible and huge destructive force of nature.