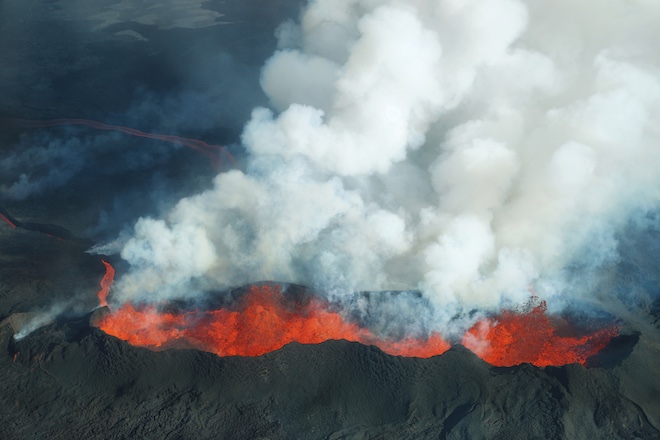 At the end of October, the Icelandic volcanic system of Bardarbung was shaken by four strong earthquakes. The tremors with magnitude 3,9, 3,2, 4,7 and 4,7 – a sign that pressure in the magmatic chamber of the volcano has accumulated. This will eventually lead to an eruption, but it is difficult to say when it will happen and how strong it will be.

The volcano can be especially dangerous if it explodes, because it is located under the largest ice cap in Europe, the Vatnayöküld glacier. Volcanoes that explode under ice are extremely explosive and produce a lot of fine ash. When the Icelandic volcano Eyjafjallajökull began to erupt in 2010, its ash clouds caused damage to air traffic throughout the world.

Earthquakes occur when waves of energy move through a solid. But this does not necessarily mean that the volcano will explode immediately.

Bardarbunga reaches an altitude of 2000 meters above sea level and is located in the Vatnayöküld National Park. It is one of the largest and most active volcanoes of the island. Although due to the remote location of the volcano seems harmless, the eruption can have an impact and beyond Iceland. The last eruption of Bardarbunga, which began in August 2014 and ended in February 2015, was the largest that the country experienced in 200 years. Ashes then spread throughout Europe.

An imminent eruption can pass through different scenarios depending on the place where it starts. One third of the volcanic system is covered with ice, and eruptions under the ice can cause explosions, turning huge volumes of ice into steam. When the magma comes in contact with the steam, it explodes and its small particles shoot high into the atmosphere. Or lava from the eruption can melt the ice and cause flooding. This happened during the eruption of Eyyafyadlyayyudlya.

When will this eruption occur? Scientists say that this is a million dollar question. The Meteorological Service of Iceland will monitor the situation. According to the Catalog of Icelandic volcanoes, the Bardarbunga system explodes every 50 years. The last eruption began in 2014.

Bardarbunga is not the only volcano hiding under the ice. Geophysicist Powle Einarsson from the University of Iceland reported in February 2017 that the four volcanoes of the island show increased activity and are preparing for an eruption. The other three are Katla, Hekla and Grimsviet. The most dangerous is Katla.

As a state that is located on the Mid-Atlantic Ridge, Iceland is very familiar with volcanoes. When Eldfeld began to erupt in 1973, the country evacuated 5,000 people in one day. The eruption lasted 6 months and in the end most of the inhabitants returned home.