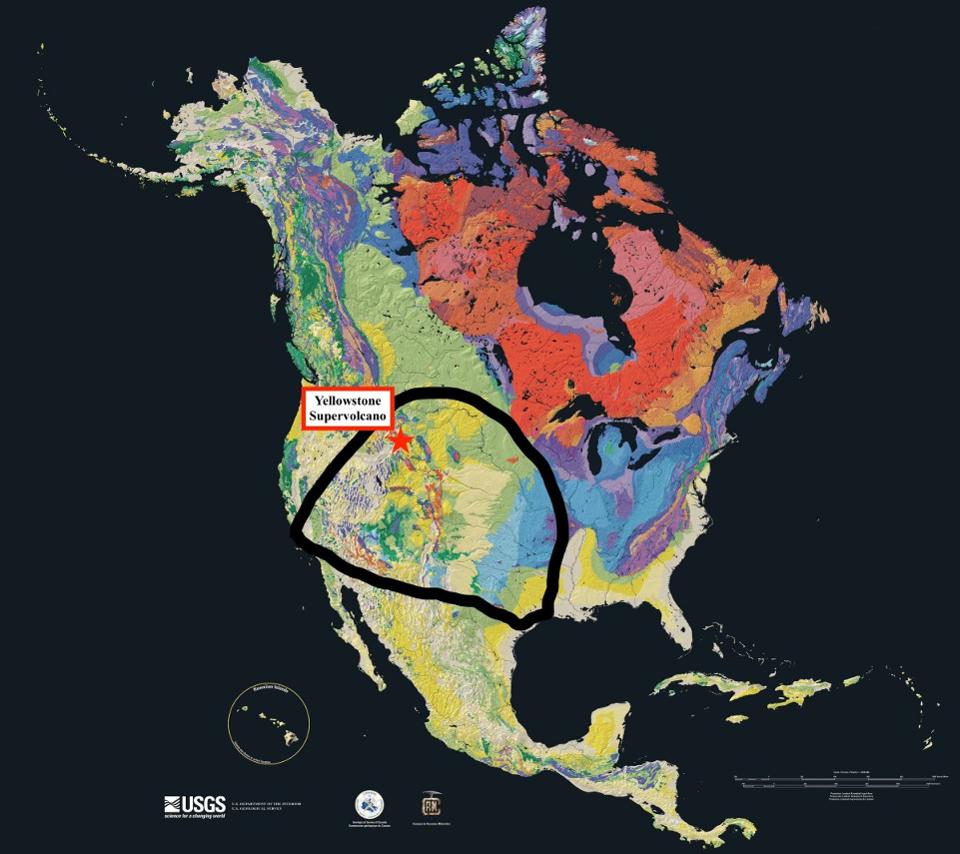 Under Yellowstone is an active volcano, capable for many years to change the global climate. Recent studies show that the most recent volcanic eruption of Yellowstone was a double eruption.

But first a little about Yellowstone and why people are worried about the hidden volcano beneath it. Yellowstone National Park was founded in 1872. The National Park covers the states of Wyoming, Montana and Idaho and is one of the most visited parks in the United States. This is due to its beauty, wildlife and geothermal geysers, such as Old Faithful.

In the world there is nothing more beautiful than Yosemite, groves of giant redwood and secluded forests, Colorado Canyon, Yellowstone Canyon.

Under the Yellowstone National Park is an active volcanic caldera, which reaches a size of 34 to 45 miles. Discussions are currently under way regarding the original source of the Yellowstone super-alkaline, especially since its appearance was geologically rapid. This hot spot, similar to the volcanically active Hawaiian Islands, but located on the continental crust as opposed to the oceanic crust. A hot spot can be associated with local lithospheric interactions with upper mantle convection or the result of a deep mantle plume that has grown millions of years.

Geological hot spots are when molten magma continuously rises from the mantle, burning a hole in the overlying lithospheric plate and causing an eruption on the surface of the Earth. Scientists can measure the signs of convection and the movement of magma in the mantle, however, the exact mechanisms with which magma moves, and why – are not entirely understood. What did the Yellowstone hot spot or hot spot in Hawaii turn into? When will they “turn off” or change their place? These are questions that remain unanswered and are sources of current research.

Geologists have identified three separate eruptions, which appeared another 2.1 million years ago, 1.3 million years ago and 630,000 years ago. They are all measured in the form of tuffs (volcanic ash), located around the western and central United States.

The last 3 eruptions occurred every 600,000 – 800,000 years. Considering that we have 630,000 years since the last eruption, scientists realize that the eruption can occur in the near (geological) future. However, there is still very little chance that the volcano will explode during our lifetime.

The last volcanic eruption 630,000 years ago produced a massive volcanic ash called Lava Creek Tuff, which covered most of the western United States.

The maximum thickness of volcanic ash reaches 660 feet. Given that the ash has since been compacted due to the weight of the overlying sediment, the deposited ash would have been thick enough to cover most modern skyscrapers. 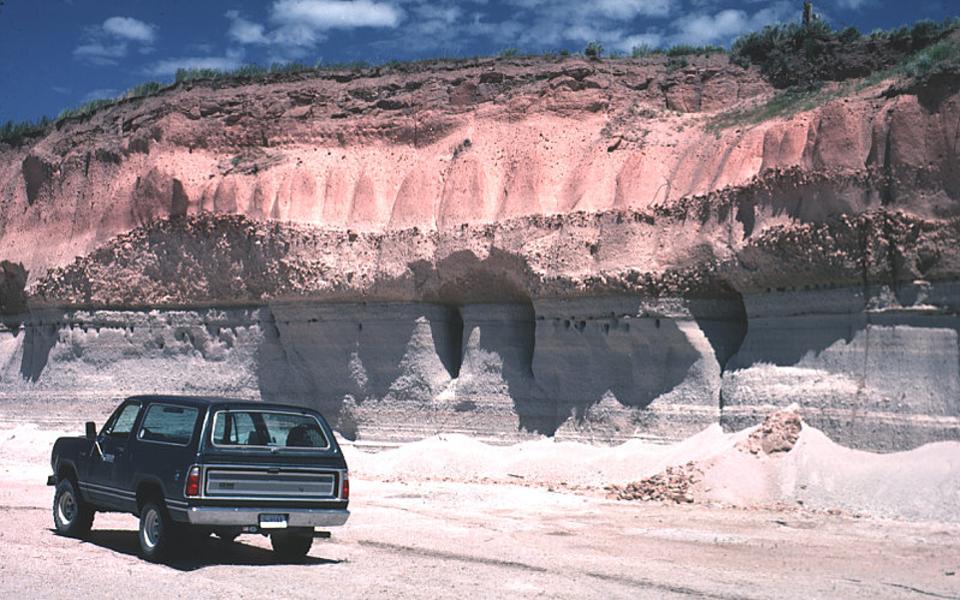 You can imagine it was a catastrophic release of ash into the atmosphere and it covered most of the United States and had a significant impact on both climate and life. During one of these eruptions, an immediate lethal effect of a large-scale sediment occurred. However, there was also a longer lasting lethal effect of the reduced ability of plants to photosynthesize and animals it was difficult to breathe under the sky filled with ash and harmful gases.

Recent studies have shown that the last eruption from the Yellowstone caldera was, in fact, two eruptions that occurred one after another. The research team identified this after discovering two layers of volcanic ash in the oceanic sediments of the Santa Barbara Basin. The team was able to chemically print ash layers to determine that they were both, in fact, derived from the super-Yellowstone volcano.

Once the team was able to determine that the two ash boxes were separate events and were derived from Yellowstone emissions, they were able to gather some information about the events. By age, there are cases of eruptions about 170 years apart. This means that potentially two consecutive generations of animals have witnessed a volcanic eruption in Yellowstone during their lifetime. A truly destructive and transformative time in the history of North America. 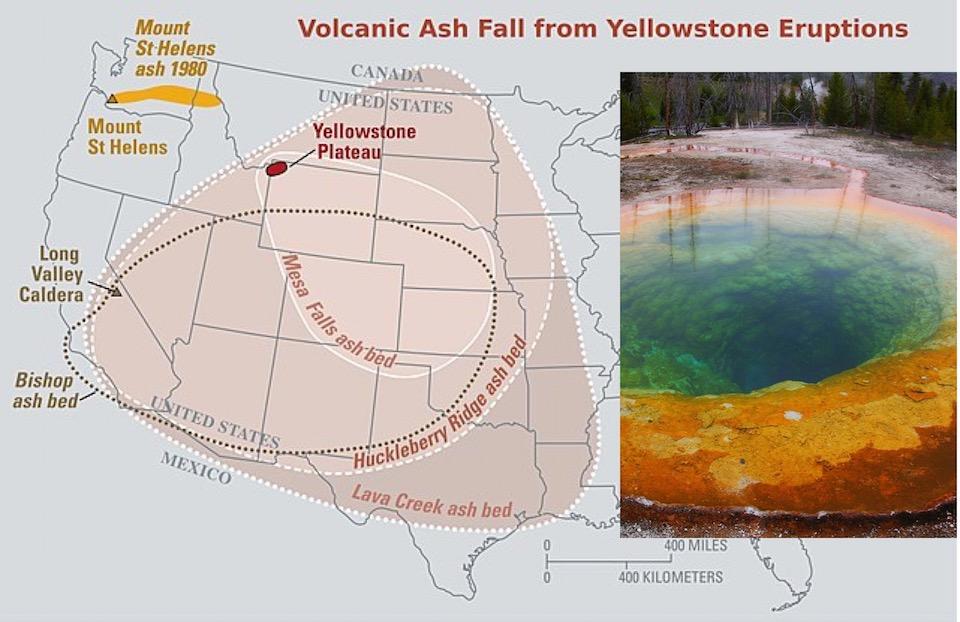 In addition, the researchers found that because of the eruptions there were global effects on the climate. The team found that each eruption caused the ocean to cool down about 3 degrees Celsius. They determined this by measuring the isotopes in the foraminifera shell. Foraminifera are small photosynthetic organisms that float near the surface of the ocean. They absorb different ratios of oxygen isotopes in the manufacture of their carbonate shell, depending on the temperature of the surrounding ocean water. By accurately measuring the ratio of these isotopes and comparing them with standards around the world, scientists can determine the temperature of the ocean surface for a short time when these foraminifers were alive. Having made these measurements throughout the entire core of the sediment, scientists can develop a sea surface temperature (SST) curve in time.

So did Santa Barbara’s geology team and came to the conclusion that each of the two volcanic eruptions of the Yellowstone volcano caused a drop in ocean temperature by about 3 degrees Celsius. Both eruptions temporarily cooled the planet, changing the trend of warming.

It plunged the world into a volcanic winter, as a result of which ash and gases thrown into the atmosphere temporarily blocked the sun and cooled the planet. One thing is for certain that the Yellowstone volcano will explode again in the future. However, the exact time (up to a century) is still unknown. Like the magnitude of the next eruption and what people can do to try to soften it or protect themselves.

When will the next eruption of Yellowstone occur and what can people do to protect themselves?

You, naturally, can ask yourself two questions, when the next eruption occurs and what we can do with it. The question of the next eruption is very difficult to answer. Recently, geologists have noticed a surge of earthquakes in the region associated with the movement of magma in magmatic chambers. However, this can theoretically last hundreds of thousands of years, when the magmatic chamber of Yellowstone slowly fills up.

A few years ago, geologists also noted that the height of the Yellowstone caldera increased to 2.8 inches per year. This was the result of an increase in magma filling the underlying chambers, and literally pushing the earth upward. Fortunately, this has slowed significantly over the last couple of years. However, this again indicates that the Yellowstone volcano is preparing for a future eruption. Unfortunately, when it comes to predicting the time of the eruption, geologists leave a big gap in the prediction.

There are distinct signs of an eruption, which should happen, say, in the next few months. This includes increased earthquake activity, earth surface buckling, increased volcanic gas emissions, etc. On the other hand, geologists can use the average time interval between recent eruptions as a very rough exponent of the eruption time. Consequently, geologists can probably detect an imminent eruption, but beyond this, for Yellowstone, the next best guess is every 600,000 – 800,000 years. It is inconvenient that we are now in this range, but it is also likely that the next eruption will occur in 100,000 years.

Given that the next eruption can be 100,000 years or 50 years from now, people’s ability to react and mitigate the next eruption varies greatly. If the eruption should have occurred in 50 years, we can do little, but wait and prepare. Perhaps widespread plans for evacuation from the western and central United States to the east coast.

If the Yellowstone volcano was to break through 100,000 years, people will definitely have a much better chance of alleviating deaths and damage. One such solution that NASA is studying is to drill holes in the Yellowstone caldera and relieve the growing pressure. This is in the hope of reducing the scale of the next eruption and potentially prolonging its appearance. However, the concept is highly hypothetical, and NASA is far from what it has ever done. Another reliable scenario is that in 100 000 years people can probably colonize another planet and we can avoid such catastrophic events in advance.

The eruption of the Yellowstone volcano is one of those events with very little probability, but very large consequences. These are things that tend to bother people much more than anything else. Despite this, let’s hope that we will not have to face the impending eruption of Yellowstone and the consequences thereafter.