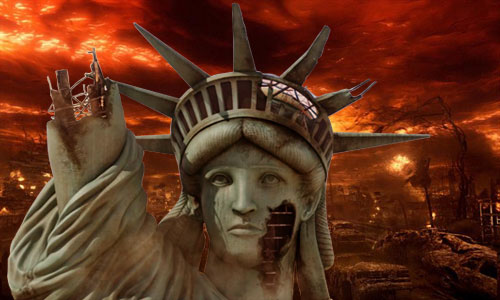 One of the many reasons of this Apocalypse may be the famous Yellowstone SUPERVOLCANO is one of the largest in the world. It is located in Yellowstone national Park, USA, famous for its geysers. Over the last 2 million years there were several powerful eruptions and since Yellowstone is considered a sleeping volcano.

Over the years, scientists studying the volcano have found that the size of the Caldera (concourses basin of the volcano) is about 55 and 72 km, and occupies a third of the Park.

The activities of volcanoes can lead to disaster on a planetary scale. After the super eruption will be no drastic fluctuations in temperature, and cold even at half a degree on a planetary scale will lead to a sharp redistribution of air masses, begin hurricanes and catastrophic precipitation.

The danger of a super eruption of Yellowstone is real because they have happened repeatedly and there is even some periodicity of these eruptions. Different scientists who represent different computer models that would accurately determine when to happen a new eruption. Some believe that the schedule of the giant eruption is overdue and he should have been blown up in 30 thousand years ago.

But the volcano is not erupting with a frequency of day, and therefore, the exact timing of the new cataclysm is simply impossible to predict.

Definitely aware of three large Yellowstone eruptions, the last of which occurred 640 thousand years ago, but between these catastrophic superiority there were a lot of average and not-destructive. The last such eruption occurred 80 thousand years ago

Scientists reassure the public that in the area of the volcano operates a network of different research stations which conduct ongoing monitoring of the situation. They say that if the volcano will really come to the point of explosion, it will not happen immediately and first, near the main Caldera will grow several new volcanoes. The research station these changes will fix immediately in advance and the scientists will inform the authorities about the danger, and they in turn will notify the population.

It should be noted that according to official plans, in this case, there is a setting to notify the public no earlier than two weeks before the start of the eruption, despite the fact that the fact that the impending disaster and the exact date will be set 6 months before alerting the public.

Due to this decision by the desire to avoid panic among the population. According to the authorities, if to inform the citizens about the imminent catastrophe at once, half a year before the cataclysm, this will lead to even worse consequences than the eruption and people will be notified only for 14 days prior to the disaster.