“Whirlpool of despair” in the Gulf of Mexico 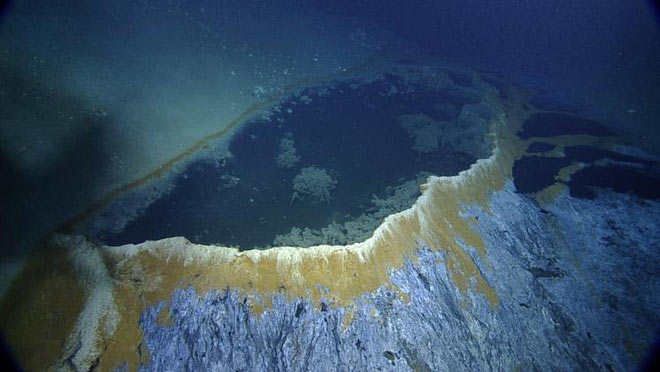 It is called the “Whirlpool of despair”. Underwater lake, discovered at a depth of 100 meters under the surface of the Gulf of Mexico — well supersaline water and liquid methane, which kills any creature that was unlucky to get it. The discovery was made last year, the research vessel “Nautilus”.

In the video, scientists remotely controlled device “Hercules” over a circular puddle. See “pickled” crabs, which fell into a Whirlpool of despair. “These large organisms really don’t like to be in the liquid or, maybe they came here to die,” says one of the scientists.

Jacuzzi of despair allows scientists to look at the strange world of underwater biology and Geology. Underwater lake was formed millions of years. Then the shallow-water Gulf of Mexico has evaporated and left behind huge deposits of salt. The layers of salt that are now under water, shifted and cracked, trapping the shale rock oil and gas. The result was the formation supersaline solution is so dense that it is not mixed with sea water. Then “pickle” translates into underwater lakes, rivers and waterfalls.

Jacuzzi of despair — a crater-pocked puddle 3.6 meters above the ocean floor. Around it lined up mussels that help keep the outer wall of the lake intact. Although mussels great living at the edges of puddles, “brine” is toxic to most marine creatures. Liquid to four times the usual salty ocean water.

To measure salinity, temperature and depth of a puddle, “Hercules” was loaded in the sensor. From the lake surface to a depth of three meters “pickle” was relatively warm and 7.8 degrees Celsius. When the sensor is immersed deeper, the temperature rose to 19 degrees. The tool is plunged by 18.9 meters in a Jacuzzi of despair, but never got to the bottom.