Wildfires rage in Syria and Lebanon 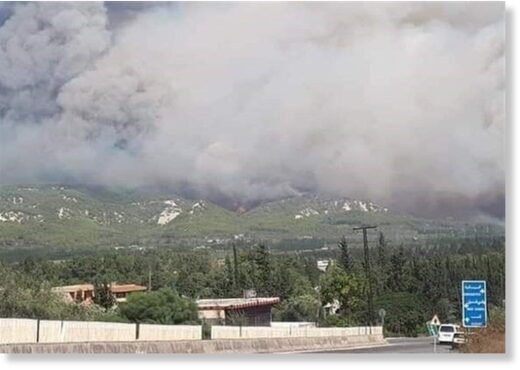 Wildfires in Syria and neighboring Lebanon have killed two people and burned vast tracts of land.

Syrian state television on Saturday morning broadcast scenes from the affected areas and reported that hundreds of hectares were burned in the countryside of the Syrian coastal provinces of Latakia and Tartous, as well as in the central province of Homs.

The health ministry said two people had died in the Latakia province as a result of the fires and that 70 people in the area had been rushed to hospital with breathing problems.

Dozens of fires burned, including 45 in Latakia and 33 in Tartus ..

The Latakia fire brigade said they were “facing the largest series of fires seen in Latakia province in recent years.”

The official news agency SANA reported that houses in Banias, Tartus province, were burned in a fire.

In neighboring Lebanon, there have been more than 100 fires across the country, according to George Abu Musa, the country’s chief of civil defense operations.

“The situation is crazy, there are fires everywhere,” Abu Musa said

“We have mobilized 80 percent of our staff and almost all of our centers in Lebanon,” he said.

He said most of the fires have been extinguished, but some still burn in the Shuf mountainous region in the south and in Akkara in the north.

He added that military helicopters are helping firefighters in “hard-to-reach” areas.