Will the Yellowstone super-volcano explode? 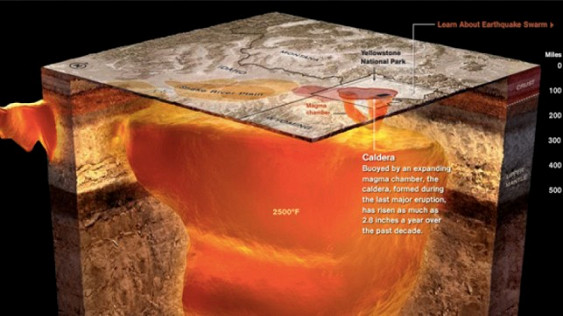 Under the territory of Yellowstone National Park (Wyoming) is the hearth of a large volcano, which has now intensified.

According to experts, the volcano woke up after a recent earthquake, which triggered an increase in the number of magma eruptions. To date, the Yellowstone volcano is considered one of the most dangerous active volcanoes on Earth.

What kind of a volcano?

The Yellowstone volcano is a super volcano. Recall that the super volcano is not strictly a scientific term, it is usually the volcanoes that formed in a hollow in the earth, called the caldera.

It is not only a volcano large in size and size. It is extremely dangerous, since its eruption can provoke climate change on the planet. Now, about 20 super-volcanoes are known on the planet, including Yellowstone.

Another difference between the super volcano and the usual one is that when a volcano erupts, the lava gradually accumulates in the mountain, and only then begins to come out.

In the super volcano, magma, approaching the surface, is collected in a huge underground reservoir. It melts the nearest rocks and becomes even thicker, while the pressure continues to build up.

The Yellowstone super volcano is just above the hot spot where the hot molten rock is closest to the surface.

The last day of Pompeii

Yellowstone’s super volcano has long been troubling scientists, and ordinary people. About its danger began to speak back in April 2016, when the experts had the first suspicions of a possible catastrophe.

Then, in April 2016, when a series of earthquakes swept across America, many were horrified, from news in the media: “The most dangerous volcano woke up,” “America will fly up into the air” – frightened journalists.

And maybe not for nothing to scare?

Then in April, the professor of the geographical faculty of the Moscow State University Andrei Lukashev, was not going to frighten anybody else, but he did not feel a positive attitude either:

The consequences of the forthcoming eruption will lead to the so-called effect of nuclear winter: people will not see the Sun for several years, Lukashev said then.

Even then, scientists began to sound the alarm, pointing to a catastrophe that could occur at any time.

As you know, the dangerous volcano is located in the Yellowstone National Park, in the state of Wyoming (USA), its hollow is 55 by 72 kilometers, which is about a third of the park’s territory and almost twice as large as New York and Moscow.

This size and power of the volcano seriously worries not only geologists, but also ordinary people, because if the eruption starts, it will not only destroy the US, but also cause great ecological damage to the entire Earth. According to a number of researchers, the consequences of the eruption will lower the temperature on the Earth by 21 degrees, but also destroy huge populations of animals and plants, which will become a catastrophe of universal scale.

The eruption will lead to the death of at least 87,000 people, experts say.
The Yellowstone volcano shows its activity every 600 years, and now, just 600 years have passed. This is a normal action of standard volcanoes, because I do not see anything strange in it, and all geologists too – this was predicted a long time ago. In addition, it is not a fact that the eruption will occur, said Peter Shebalin, a researcher at the Institute of Earthquake Prediction Theory and Mathematical Geophysics of the Russian Academy of Sciences.

And yet, recently the sleeping volcano begins to show more and more obvious signs of activity, which only aggravates the situation around him. So, more recently – on the night of October 3 to October 4, 2017, black smoke poured from the volcano, which frightened the inhabitants of the state in jest. It turned out that the smoke was coming from the geyser of the Old Campaign – the most famous geyser of the volcano.

Usually the volcano throws a jet of hot water from the geyser with a height of 9-storey house at intervals of 45 to 125 minutes, but here instead of water or at least steam, black smoke is thrown.

Why the black smoke comes from the volcano – it’s not clear. Perhaps this is a burning organic substance that has come to the surface. But it’s too early to worry, since the burning of one geyser does not say anything yet, Shebalin explained. Animals can not be fooled?

It is generally believed that animals are well aware of the approaching catastrophes, since they possess the capabilities of seismic indicators.

For example, before the earthquake, many owners of pets noticed that animals behaved extremely strange: dogs barked and cats rushed about the house, and so on.

In September 1927, in the Crimea, 12 hours before the onset of the tremors, the cows abandoned the food and began to moo anxiously, the horses were torn from their leash, the cats and dogs clung to their masters, howled and mewed.

In Ashgabat (1948) at the stud farm, the behavior of animals before the earthquake was even more violent. The horses knocked out the gates of the stables and burst out. Two hours later the building collapsed from an earthquake.

As for Yellowstone, even there the animals behave strangely. When news of the possibility of an eruption of a super volcano began to alarm people more and more often, a video of buffaloes running away from the Yellowstone National Park appeared on the network.

This caused concern already among people who decided that this could be a sign of an eruption of a super volcano soon.

And although experts say that these are just seasonal migrations of animals in search of food, the public still does not believe in such coincidences.

Should I be afraid of the United States?

From all that has been said above, it is obvious that if the eruption does begin, the fate of at least the US looks clearly unenviable. The leading state of the world is unlikely to survive a possible catastrophe. However, the danger is aggravated by the fact that only the US apocalypse will not be limited. After the eruption, the temperature on the ground will drop by 21 degrees, and because of the emissions, the visibility will not exceed one meter. The very same US territory will be completely flooded with lava.

Analysis of the molten rock of the Yellowstone super volcano showed that the eruption is possible without any external influences, so a catastrophe can occur at any time.

Yellowstone volcano in the US is considered a hot spot of the Earth, like Hawaii with its Kilauea or Eyyafyadlyayukudl in Iceland. They are, of course, very dangerous in their eruption due to their size and power, as they will throw out millions of cubic meters of magma, and ashes will be many. But we do not yet have enough data to speak about the exact or at least approximate date of its eruption, said Vasily Lavrushin, a member of the Geological Institute of the Russian Academy of Sciences

Just setting the date of a possible eruption and dealing with scientists. This is necessary in order to be ready for the impending catastrophe. The problem of the volcano is occupied by NASA, volcanologists from the University of Victoria, as well as New Zealand geologists.