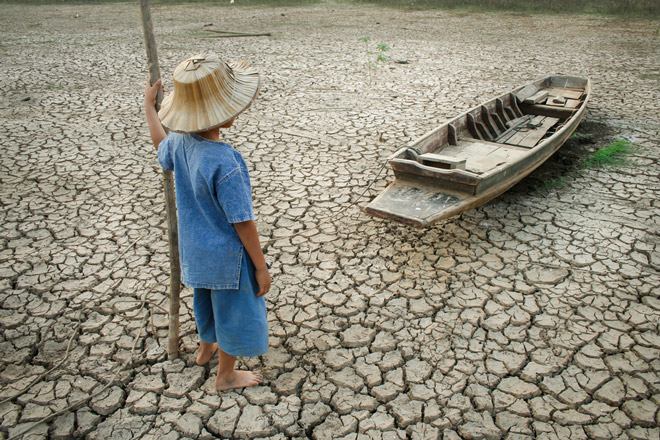 The World Meteorological Organization (WMO) presented a report in which record droughts, heat waves, precipitation, melting of sea ice and many other tangible signs of climate change of the Earth were recorded.

The WMO report on the state of the global climate in 2016 points to numerous indications that the weather on our planet is becoming increasingly extreme. Among them:

– Record average annual temperature (1.1 ° C above pre-industrial level);
– millions of hungry people in Africa because of the decrease in the amount of precipitation by 60% below the average level;
– floods that forced hundreds of thousands of people to migrate in Southeast Asia;
– record low sea ice levels both in the Arctic and in the Antarctic;
– the most wet year in the history of observation in China;
– a record winter-spring drought in Canada, which led to a severe forest fire in the province of Alberta;
– Extreme temperatures all over the world – from Santiago to Chile (37.3 ° C) to Spitsbergen in the Arctic, where during the year it was 6.5 ° C warmer than the average between 1961 and 1990;
– destructive forest fires in Tasmania in conditions of prolonged drought;
– and then devastating floods due to heavy rainfall from May to December.

Against the background of concerns about the US withdrawal from the Paris climate agreement, the Secretary General of WMO said that it was “vital” to reduce carbon emissions and prepare for “weather worsening.”

The election of Donald Trump, who appointed a number of individuals who denied climate science, to key posts in his administration, provided support to skeptics around the world. This was the main theme of the annual meeting of the American Association for the Advancement of Science in Boston last month. In the coming months, similar meetings are planned in Washington and other major cities around the world.

Climatic skepticism is not limited to right-wing American politicians. So, the leader of the Independence Party of Great Britain, Poll Nuttall, suggested that the documentary about climate change “An Inconvenient Truth” is “in fact a convenient lie used by propagandists”.

But, according to Dr. Phil Williamson of the University of East Anglia, the WMO report on the climate of 2016 leaves no room for skeptics: “Global warming is an empirically verifiable fact combining annual volatility with the consequences of greenhouse gas emissions by mankind. To challenge this connection is antiscientific. ”

According to the Intergovernmental Panel on Climate Change (IPCC), by 2100, global temperatures could rise 2.6-4.8 ° C above pre-industrial levels if people continue to use fuel “as usual”.

However, more recent studies have shown that the Earth’s atmosphere may be even more sensitive to greenhouse gases than previously thought, and then the planet will heat up more than 7 ° C. It is dangerous to overcome the mark of 2 ° C, although the Paris Agreement called upon the world to try to stop the warming at 1.5 ° C.

It is assumed that somewhere between 3 ° C and 4 ° C considerable feedback loops will begin to grow, such as the release of a huge amount of methane from the Siberian tundra. This will accelerate global warming, and if it reaches 6 ° C, then human civilization, as we know it, will come to an end.