Southern Madagascar is experiencing its worst drought since at least 1981. The region is in its fifth year of drought, which has destroyed crops and hampered access to food. In the three months through January 2021, less than 50 percent of normal rainfall fell. In addition, up to 60% of the crop is expected to be lost in the coming months.

This is the fifth below-average rainy season recorded in southern Madagascar in the last six years.

Children and women are the hardest hit, with three out of four children dropping out of school, mostly to help their parents get food.

As of May 12, at least 70,000 children are suffering from acute malnutrition, and the number is increasing daily. Unless immediate emergency aid is provided, there is a risk of starvation spreading, endangering the lives of up to a million people.

Marlene Mueller, WHH program director, described the situation in the south as dramatic.

“Our colleagues in the south are reporting that some fields have turned to dust and sand because of the lack of rain,” Mueller said.

“Small farmers usually harvest at this time of year to feed their families. Instead, children are forced to starve because they don’t have enough to eat. People eat leaves, berries and locusts. Small farm families have no way to get enough healthy food or make a living.”

“They have no reserves left. Without quick help from the outside, they are facing starvation.”

Over the past six years – 2015/16 through 2020/21 – southern Madagascar has experienced five below-average rainy seasons. The last two consecutive seasons with below-average harvests have resulted in serious reductions in staple food production and a reduction in the size and fatness of livestock herds. 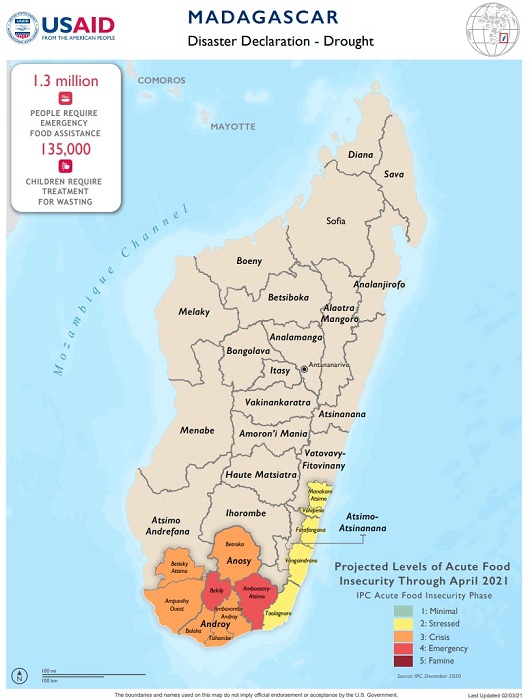