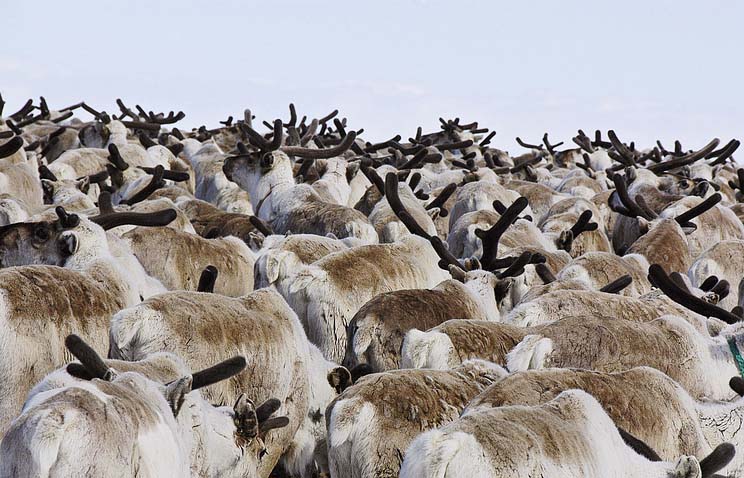 The quarantine is introduced in one of the districts of the Yamalo-Nenets Autonomous Okrug (YANAO) due to anthrax caused the death of more than a thousand deer, said on Monday in a press-service of the head of the district. The last case of an outbreak of anthrax on the Yamal Peninsula was registered 75 years ago — in 1941.

“Analysis of samples taken by the experts of the working group in dead animals, showed the cause of mortality of deer. In the veterinary service of the Yamal confirmed that some of the die-off of deer caused by anthrax. District Governor Dmitry Kobylkin, by order entered July 25, the quarantine mode in the Yamal area”, — said there.

According to the authorities, at the moment than 1.2 thousand animals. “It has been made the autopsy of the animals, samples of biological material for analysis, the examined tundra, given the necessary recommendations to the herders. The results of a comprehensive research, experts have confirmed that the loss of deer was not only caused by heat stroke due to the heat wave, but the disease — the Siberian ulcer,” said there.

The experts stress that the threat to people there. “All tundra carefully examined: all healthy. Near the herdsmen, and that 63 people, is a therapist, who observes the condition. As preventive measures, the nomads of the camp will be moved to another area of the tundra for preventive vaccination. The helicopter has already been sent to a Parking lot,” — said the press service.

Vaccination is considered additional to all the nomads of the Yamal district. Among herders, kalaywa in the tundra, is an alert situation.

The first reports that reindeer can not withstand abnormally high temperatures started in the last week of the Yamal tundra.

“By the weekend the most difficult situation was observed among the reindeer-owners near the Fort Tarko-sale Yamal region and in the reindeer herding brigade, kalaywa next. Now the total loss amounted to 1200 heads,” — said the press service.

According to veterinarians, a common cause of infection of deer — opened because of the heat, place a long the death of the animal infected with anthrax. “In this area there are burial sites, but, considering the viability of anthrax — 100 years or more, professionals suggest that deer in search of food came across a place of the dead from anthrax animal and then infecting each other. So the local place of this grazing deer trail — will be enclosed with poles,” — said the press service of the Yamal Governor.

Currently, measures for disposal of dead animals. “A healthy deer herd will be affected additional vaccinations; serum ordered and will soon be delivered from Moscow to Yamal. Funds for carrying out cleaning of the place of death of animals will be allocated from reserve Fund of the budget of the Yamalo-Nenets Autonomous Okrug”, — said there.

“After the determination of damages herders will address the issue of compensation for the losses. The situation is under constant control of the Governor”, — concluded the press service.

Anthrax on the Yamal Peninsula

The last case of an outbreak of anthrax on the Yamal Peninsula was registered in 1941. According to the authorities, every year in the County vaccinated about 150 thousand deer. “Along the way, just in case, grafted almost all large and small cattle and horses periodically examines the soil cover. Last year alone collected more than 10 thousand samples of earth, all negative result,” — said the press service.

In 2015, the volume of vaccinations and other preventive maintenance has exceeded 480 thousand heads of animals. Herd of reindeers on the Yamal Peninsula has 700 thousand heads.

According to the weather service, during the month in the Yamal Peninsula, whose territory belongs to the Arctic zone of the Russian Federation, recorded anomalous heat. The air temperature reached 35 degrees above zero. Monday a slight cold, in the afternoon the thermometer will not rise above 22 degrees.