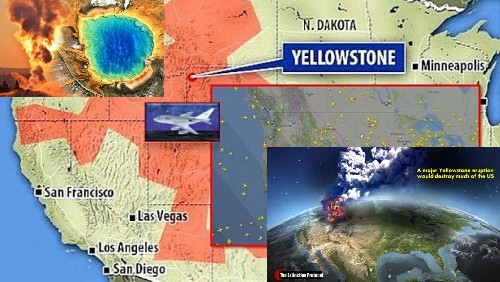 The year 2017 has become very intense natural disasters, hurricanes, floods, fires and, according to many experts, it can result in a massive earthquake in the Yellowstone National Park area followed by the eruption of the super volcano itself.

The eruption, which can last several days, weeks or even years, will be ten times more powerful than the eruption of the Pinatubo volcano in 1990 in the Philippines, which killed 700 people. This eruption can plunge the world into a volcanic winter.

A recent swarm of earthquakes bothers many, the US population is afraid that this is a harbinger of a volcanic eruption. In October 2017, several earthquakes were recorded, the magnitude of which exceeds 4 points, not to mention the fact that earthquakes of lesser strength occur daily and there are many.

But scientists are worried about the likely eruption of a super volcano, which in their opinion will not happen soon, but earthquakes, because a powerful earthquake will cause no less damage than the eruption, and the probability of such an event is much higher.

On August 17, 1959, an earthquake measuring 7.5 points shook Lake Hebgen, Montana, killing 28 people. Be like this today and the number of victims will be much greater.