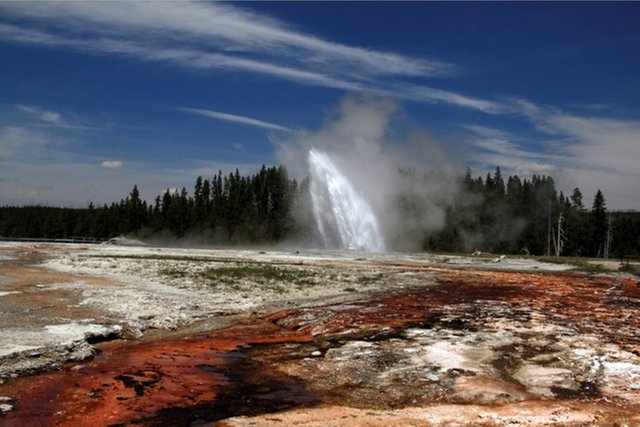 Geyser Steambot in the Yellowstone National Park in the US erupted this week for the eighth time this year, and scientists do not know exactly what the reason for this activity is.

This geyser is located in an area called Norris Geyser Basin, which is considered to be the hottest and most variable thermal zone in Yellowstone Park.

Steamboat (Steamboat – translated from English “steamer”) erupts not very often, but it is the highest active geyser in the world. It throws out a water jet about 91 meters high.

Geyser showed activity on Monday, and before that erupted four times in May, twice in April and once again on March 15.

The March eruption was preceded by a long period of calm following the eruption in September 2014.

The recent eruptions of the geyser were slightly less than in the past. During the April eruptions, Steamboat threw out about 200-400 cubic meters of air into the air. m of water. This is 10 times less than throwing out another famous geyser in Yellowstone Park – Old Faithful (“Old Officer”). But the problem is that Steamboat does not differ in predictability.

“Most geysers erupt infrequently, unlike Old Faithful, so Steamboat is not enigmatic in this respect, but Steamboat has a riddle because it’s the highest active geyser in the world.” He draws attention because of this, and that’s fair, ” said Michael Poland, an employee of the Yellowstone Volcanic Observatory, to CNN.

Although the Yellowstone caldera is considered active, scientists believe that it is unlikely to erupt in the next thousand years.

Apparently, there is no direct connection between the eruptions of the geyser and the super-volcano Yellowstone, Poland noted.

“The eruption of the geyser reflects the processes occurring in the least deep part of the system – from tens to perhaps several hundred meters in depth, while the magmatic system begins at a depth of about 5 km,” he explained.