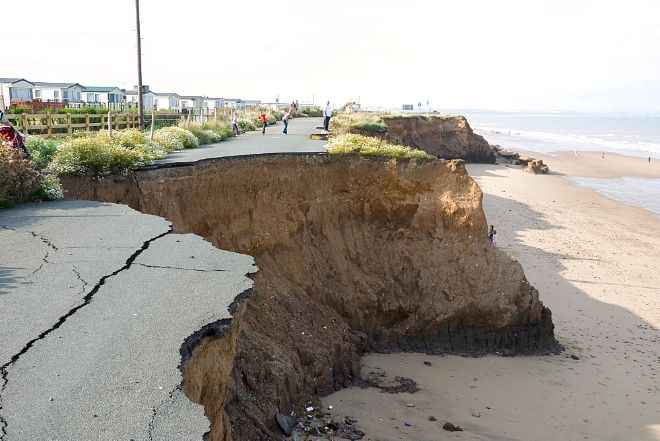 Residents of the coastal village of Skipsy in Yorkshire in Northern England in mid-January, authorities warned that 20 houses were inevitably at risk of collapse at sea over the coming year. The area from Bridlington to Withersi has become the fastest decaying coast of Northern Europe, reports The Guardian.

Fearful landslides are visible behind the houses of Skipsi, parts of yards and gardens have disappeared due to a landslide that occurred earlier this year. The edge of the cliff is 9 meters from the doors of some houses. The main road that once ran along the street now suddenly ends in a cliff.

The erosion of the clay coast of Yorkshire is a long-standing problem: about 30 coastal villages have disappeared in a few hundred years. Permanent destruction began about 10 thousand years ago, at the end of the last ice age.

The global climate emergency has accelerated this process. Rising sea levels, more frequent and fierce storms with high waves and gusty winds have led to the disappearance of the coastal strip with a width of more than 1.5 km along the entire length of the Yorkshire coast over the past 20 years.

Parts of the coast collapse much faster than anticipated. Weather conditions led to the collapse of more than 10 m of rock from the coast in just 9 months of 2019, compared with an average of 4 m per year.

For a long time, the picturesque coast of Yorkshire was popular among tourists and local vacationers.