5 cities in which simpler to die than to survive 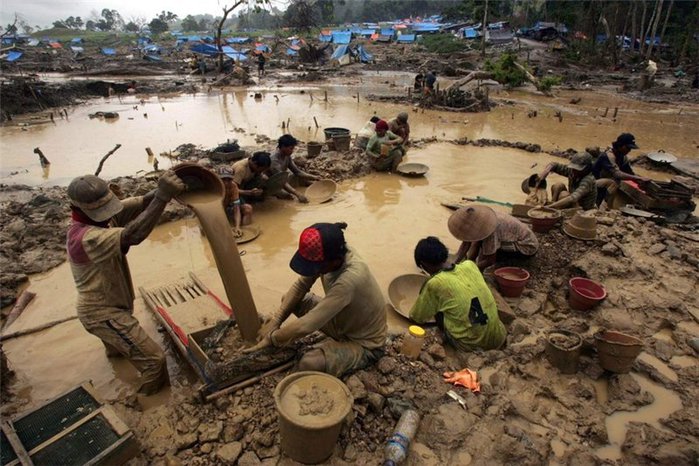 Having learned about living conditions in these cities, you will cease to complain of traffic jams, a smog and absence of planetarium in your area. 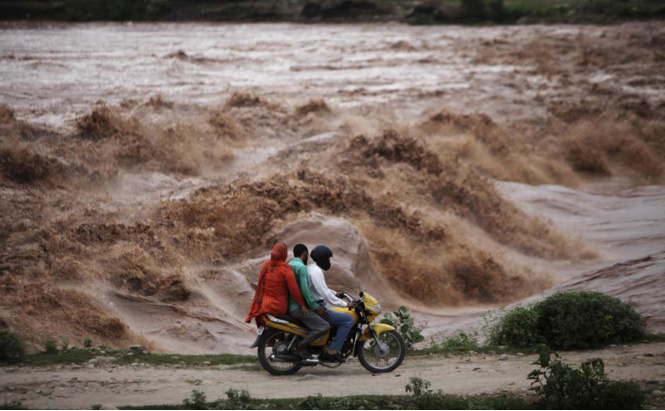 The most rainy place in the world is in the Indian state of Meghalaya on border with Bangladesh. The city lies on the way of the monsoons coming to India from the southwest, directly in the middle of a labyrinth of mountains which create a peculiar funnel of the coming clouds. An average amount of precipitation here — about 3 cm daily. But it doesn’t mean that the rain goes to Cherrapunji constantly: five months of almost continuous heavy rains are replaced seven months of a hot dry season.

Having considered a city arrangement strategically convenient, the British colonists constructed in Cherrapunji military base at the beginning of the 19th century. However soon they had to refuse this invention as the level of suicides among the English officials billeted in the city was abnormally high. Military suffered from a depression and asked home for solar England. The climate didn’t exert similar impact on locals and doesn’t render.

Paradoxically, but fact: one of the main problems in Cherrapunji is shortage of drinking water. The mountain on which the city is located consists generally of limestone, and all moisture safely filters through breed to fall a flood upon Bangladesh. 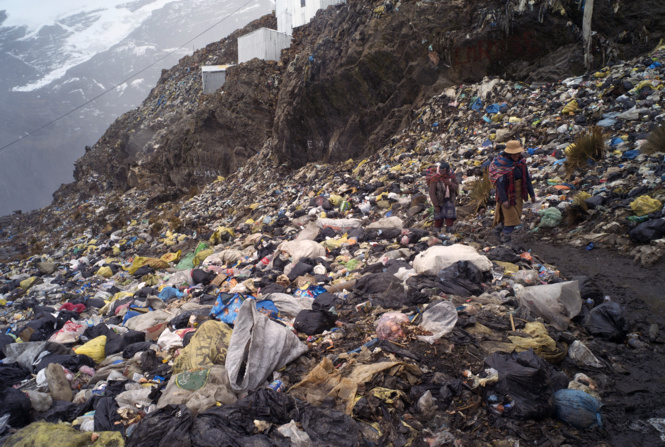 La-Rinconada, the most mountain posedeniye of Earth, is in the Peruvian Andes at the height of 5400 meters of 20 kilometers from border with Bolivia. Daytime temperature at such height usually doesn’t rise above zero, and at night constantly subzero temperatures. Here plants, suitable for food, don’t grow, air is rarefied, and because of a lack of oxygen of people very quickly is tired. La-Rinconada’s inhabitants live in the metal hovels, similar to barracks, huddling on hillsides.

The unique place in the city where it is possible to rent the room — a brothel. There is no public health service here as, however, and sewerages, and garbage are just thrown out on streets or burned. Regularly brings roads dirt and sewage, and the soil and water are infected with mercury.

At the same time for the last decade the city endured powerful flow of the population: after detection in mountains of a pot of gold there arrived about 50 thousand people here. From 2001 to 2009 the number of citizens grew by 235%, and for the last six years was still doubled.

Also residents are threatened by glacial floods, collapses of mines, casual explosions of dynamite, leak of chemicals. Local gold prospectors are fatalists, and the death of one of colleagues is considered a good omen for the others. On a pagan belief, absorption by the mountain of a human brain pushes out gold closer to a surface and it becomes easier to be got. (At you at office not also?) The only entertainment in the city is alcoholism therefore death rate in drunk fights is very high here. Delete this place from plans for a honeymoon. 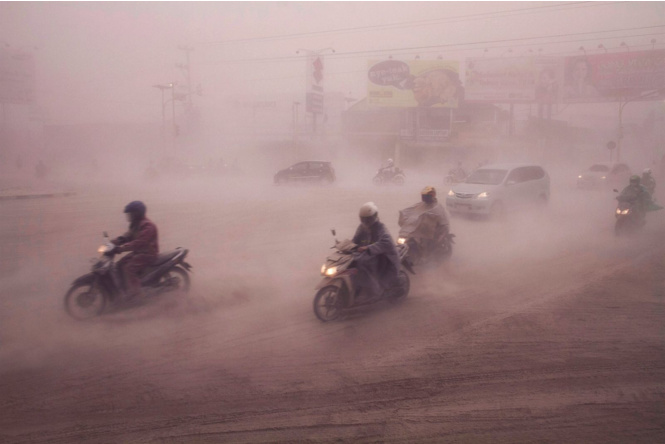 You need to solve quickly, where to place three million people who remained homeless. If you tell that on an active volcano, you precisely heard about Yogyakarta (or went crazy).

The population of Java Island — 120 million, and the vast majority of them lives in close proximity to active volcanoes. The most courageous it is possible to call residents of Yogyakarta, the ancient capital of Indonesia constructed on Merapi volcano.

For the difficult historical reasons (so difficult as far as also boring therefore just take us the word) Yogyakarta, being a part of the Indonesian republic, nevertheless keeps independence and is operated by the sultan. Probably, looked at the authorities of Indonesia on a volcano and decided that locals also have so been through a lot troubles (or will have been through a lot with the first eruption which it is constant here) therefore they just left them alone.

The people of Yogyakarta — about 400 thousand peasants and one huge volcano which is regularly throwing up a lava, ashes and poisonous gas. Eruptions usually are followed by earthquakes, and in 2006 one even caused a tsunami.

On a twist of fate a volcano — the main reason of stay here the person. Locals worship Merapi as a deity. And it not only takes away lives, but also presents the followers. Thanks to volcanic activity the soil on Merapi extremely fertile. Residents of Yogyakarta haughtily glance at the neighbors from the island of Borneo whose agriculture is poor, and volcanoes so pathetic that even nobody was killed lately. 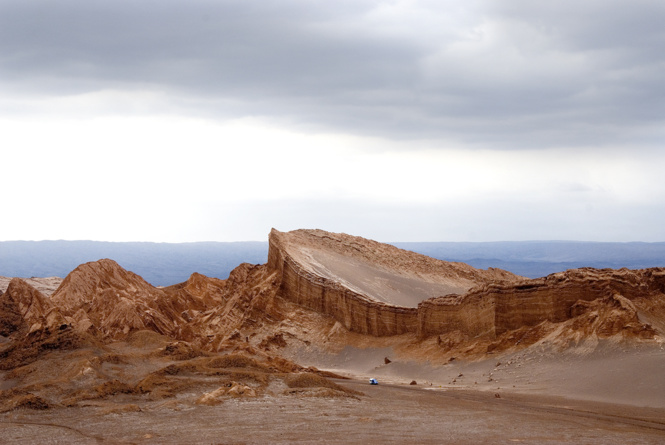 The town located on the edge of the Atacama Desert, the most waterless place on Earth is the third tourist center Chile on attendance. Are ready to argue, many come here just to understand why was to build the city where there are no water and vegetation and never it is raining. It not exaggeration.

The unusual combination of systems of pressure and geological features does formation of clouds over the desert in a literal sense impossible. Even microbes don’t live in Atakam, and if you die in the middle of the desert, your body won’t decay. The truth sounds hopefully?

In the neighborhood of San Pedro – Atakamy water nevertheless is, but she is absolutely unsuitable to use as it is poisoned with arsenic. Its content exceeds a lethal dose by 60 times. Therefore for tourists in the town the plant on filtering water so chances to live up to the end of issue here quite decent is constructed. That to locals, in centuries at them in an organism immunity to arsenic was developed.

What attracts tourists to this town? We also don’t know. There is no night life here, local laws forbid night binges and alcoholism. It is possible to look in the neighborhood of the city only at deserted slopes of a bizzare shape and craters. Some say that Atakama’s nature is similar to the surface of Mars or Earth after an apocalypse, and some — that on the level of dryness it is the place will be compared to the mightiest hangover ever tested by the person. If this is true, then we don’t want to go there. 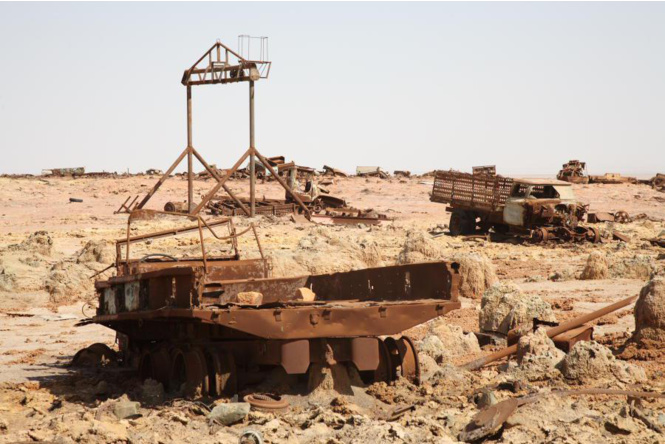 Today Dallol — the ghost town, but 50 years ago there lived people. In the 60th years of the last century a certain American company decided to get a potassium carbonate on fertilizers, but after two years’ developments during which workers generally hollowed a lava and discussed mother of the director of the company, production was phased down.

The weather forecast in Dallole could apply for “Oscar” in the nomination “Movie catastrophic crash”. Fixed earthquakes, volcanic activity, sandstorms, underground lakes of acid, abnormally hot temperature and the soil absolutely unsuitable to cultivation something — here that could be written in the tourist guide on Dallola if it existed.

Nevertheless the Afar hollow in which the city is located is considered one of places of origin of mankind. Having learned about this place slightly more, you understand why our ancestors preferred to be settled to more favorable places.