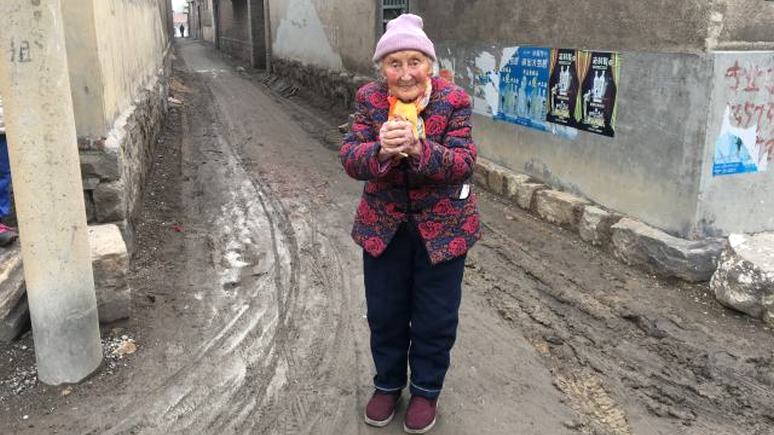 On the eve of the Chinese New year which in China is called the spring Festival, Xinhua reporters has visited the amazing UAE — 91-year-old Liu Malang, or just Nina. After 84 years of his life in China, in spite of their Slavic appearance, and green-blue eyes, the heroine of this story became a “real Chinese grandmother.”

During his long life, Nina has experienced many upheavals, ranging from the horrors of war and ending with the death of loved ones. She and her husband had a son and daughter, but none of them are no longer alive, and the grandmother lives with her daughter-in-law.

Nina she met journalists on the threshold of his small village home in Shandong province. She happily welcomed the guests in Russian: “Hello!” Her colorful cotton jacket, woolen cap and yellow scarf — so with the mind and not to distinguish from any other old woman of the Chinese village. But the “high nose and somewhat deep-set light eyes can tell us about her unusual past.”

Nina was born in 1926 in Vologda. Her father was Chinese, he had a small business in the Soviet Union. There he met a girl Lida, married her, and they had two children — Nina and her big brother. When the girl was 7 years old, her family moved to China. At age 17 Nina met, and then married the Secretary of the air force of the party “Kuomintang” Liu Chunshu. Together they few years of wandering the war-torn country, moving from place to place. In the end, Nina had lost contact with his parents and brother, even their photos left.

When the authorities in China finally came to the Communists in 1949, Nina and her husband had settled in one Shandong village, where she still lives. However, the Chinese name Nina sounded too childish, so the husband picked up for his wife Chinese version of Malang, which means one of the types of orchids.

Nina can still speak simple phrases in Russian, you can write your name and the name of his native village, Vishnevo. However, memories of Russia are almost over, there is more she did not return. Grandmother sure to have a Chinese girl right here her family.

Nina warmly recalls her husband. He was 20 years older than her, but despite this, always and everywhere inferior to her, and during the long years of living together, they never quarreled. When Liu Chunshu paralyzed, Nina 15 years cared for him, not leaving a single step. To please her ailing husband hard work she managed to save 330 yuan to buy a small black and white TV — thing for the Chinese village 80 years is exceptional.

In his 60 years Nina did not shun any work: sewing clothes, hewing stones, even drove the cart with chicken droppings. “I just did, but I never thought that I have a hard. You just have to work and find something to eat,” — says a Russian grandmother. In 1989, her husband did not, then life is gone daughter-in-law and son, from this grief Nina could not recover.

In the village Russian grandmother know how good and bright person. Except for cataracts and a small heart problem, Nina’s health is not complaining. According to her, she often asked the secret of longevity. Nina says: “I have No secret, you can eat everything, we just need to love hard and angry — not good. I was here someone was persuaded to move to a nursing home, and I don’t want, there is nothing to do, she’ll then somehow slowly”. 91-year-old woman sitting on the ground, during the interview, she quickly scurried among the guests, treating them to tea — perhaps this is the secret of her longevity, journalists said.

However, in addition to work in life Nina has another passion — singing. In addition to the famous Chinese songs she likes to sing Russian songs: Katyusha, “Broad is my native land”. However, the grandmother admits that now “a throat is not the same — that used to be very powerfully sung”.

Today the long-NIN often have guests, including from Russia, bring gifts. And local governments provided material aid that the new year will be 12 million yuan per year. “Live very well you taking care of me! I am very happy.” Nina says that she doesn’t have any particular desires, she will no longer want only to be home and do what she likes.