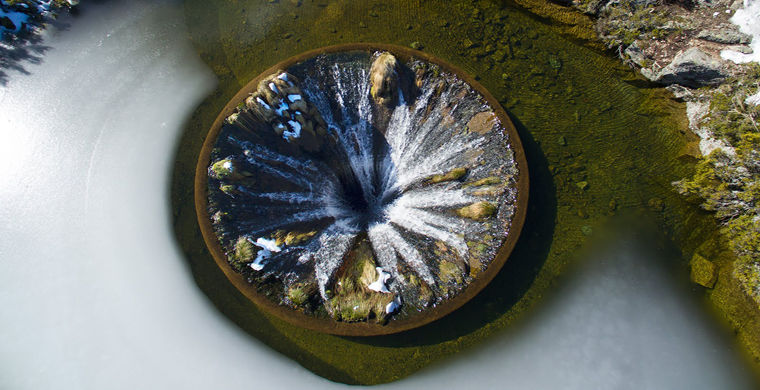 Unusual water funnel in the center of the lake, resembling a giant portal to other worlds, pretending to be natural phenomenon, but in fact it is man-made, and is one of the hidden attractions of Portugal.

Crater with a circumference of 48 meters is located in the center of the lake in the national Park of the Sierra de Estrela. The water flows away down the tunnel with a length of 1500 m, providing the work he’s Lagoa Comprida.

The system was constructed in 1955, and in the next 60 years nature tried to “revive” the walls of the funnel, and they gradually became overgrown with moss, bushes and trees at the edges. Now a marvel of engineering like a fantastic portal to another dimension. On the recording, which was filmed by drone camera and posted on YouTube by Daniel Alvarez and Haldiram Tavaresom views of funnel top opens for the first time.

Hiking near round waterfall have become very popular among tourists, despite the complexity of the route and unpredictable weather conditions.
The Sierra de Estrela — mountain range in Portugal, which is part of the mountain system of the Cordillera Central, located on the territory of the districts of Guarda (mostly) and Castelo Branco.

The eponymous national Park is the largest territory of protected area of Portugal, and his landscapes were formed during the last glaciation, when the retreating glacier left a horseshoe-shaped valley, smoothed landforms and glacial lakes.