A plume from the Aoba volcano in the Pacific Ocean 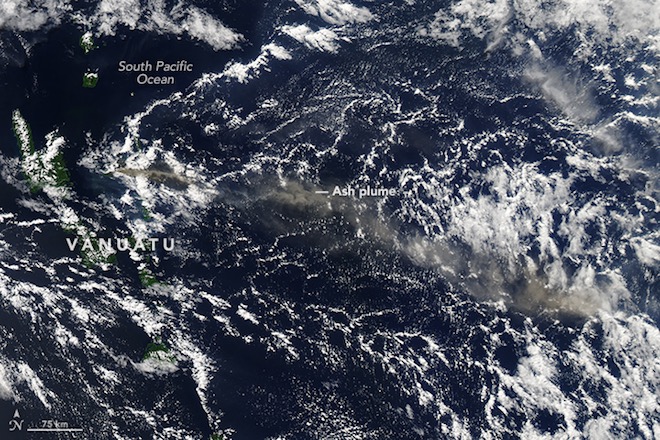 On April 1, 2018, using a tool for obtaining spectral images of MODIS on the NASA satellite, Aqua managed to make a color photograph of the volcanic plume from the Aoba volcano. The trail extends through the southern part of the Pacific Ocean. NASA notes that the colors of the image are natural.

After a period of calm from the summer of 2011, Aoba again “revived” in the fall of 2017. The periods of its volcanic activity alternate with periods of calm. By mid-March 2018, the volcano again began to erupt a cloud of ash rising above the island of Oba in Vanuatu.

According to the Global Volcanism Program, on April 6, Aoba threw out the largest column of sulfur dioxide since the eruption of the Calbuco volcano in Chile on April 22, 2015. Then over the Andes a huge mushroom cloud of ash rose, which seemed red in the sunset rays. The height of the outburst was 10 km, the “red” alarm level was declared and 5000 people were evacuated.

Vanuatu is an island nation located in the southern part of the Pacific Ocean. The Aoba volcano is located on Oba Island in the province of Penama, its altitude above sea level is 1496 m, but most of the volcano (3900 m) is water. This is one of the most massive volcanoes of the archipelago, its area is 2500 square kilometers, the diameter of the crater is 6 km.