A three-eyed snake found in Australia 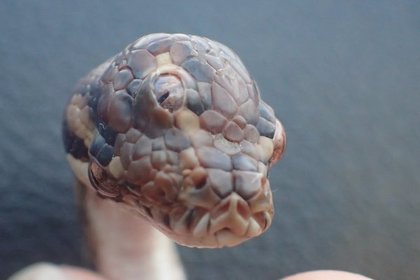 The Northern Australian Parks and Wildlife Service shared photos of a three-eyed snake found by a local hunter. Reptile images are published in the Facebook account of the service.

The three-eyed snake, which was later named Monty Python, was found on a highway 40 kilometers from the city of Darwin. According to experts, the age of the reptile is small. Its length reaches 40 centimeters. Scientists believe that the third eye – he sees as well as the other two – was formed as a result of embryonic mutation.

“I haven’t seen a three-eyed snake before, but we’ve got a two-headed cobra python in the lab – it’s just another kind of mutation, similar to the one we see with Siamese twins,” said serpentologist Brian Fry.

In February, a one-eyed goat was born, which was born in India. Such an anomaly, called cyclopia, occurs in one of 16,000 animals. Most often, those born with a mutation do not live long.

In December 2017, the remains of a strange creature about one and a half meters long, with gills, teeth and a flat head, were found on the beach in the Australian city of Emu Park.