Antarctic station have to be evacuated because of a giant crack 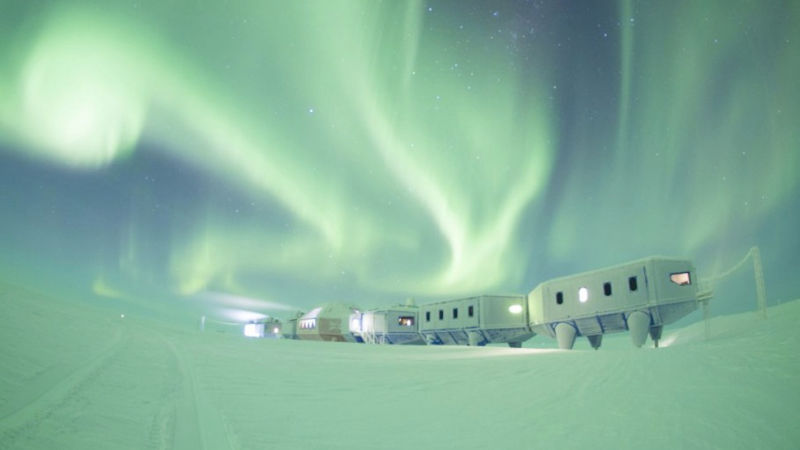 Officials responsible for the program of the British Antarctic research, as a precaution, took measures to close for the winter the Antarctic research station Halley VI Research Station (or simply “Halley 6”) after just a few kilometers from one of the most remote from civilization Outpost of humanity on the ice surface, a new giant crack.

“We want to protect the lives of their people. To bring them home for the winter – it’s a simple precaution, given those features and changes on the surface, which were marked by our glaciologists (specialists in physical structure and deformation of glacial ice, approx. ed.) in recent months,” — commented on the decision to evacuate, the program Director of the British Antarctic survey (BAS) Tim Stockings.

These changes once again show how difficult and potentially dangerous it can be to life in this inhospitable region of the world. Fortunately, the station “Halley 6”, consisting of eight separate modules, each of which is mounted on hydraulic supports with large skis, can be dismantled and moved away from potentially dangerous cracks.

That’s why, when in 2012 the Ice shelf brunt (also known as “CASM-1”) began to show new signs of glacial activity, nobody panicked. The speed with which the moving shelf (approximately 1.7 km per year) leave plenty of time in order to be able to safely dismantle the station “Halley 6” and throw it away to the East.

Moving station 23 kilometers from the site of glacial activity, the idea was to protect the station in case if this activity would be significantly higher than shown by the original calculations. The process of change began in December last year and was to date at its final stage. The new location had to throw only one module. But no sooner had the explorers moving to break a new bottle of champagne, emerged as a new and far more rapidly growing crack to the North of the new location of the station “Halley 6”, which made the situation with the move even more unpredictable.

The length of the cracks, dubbed “Halloween” on the occasion of her initial sighting on October 31 (just in time for the celebration of all saints Day), at the time of its opening was 22 kilometers. But after just a little over two months, it has grown to 44 kilometers, and now no one can say exactly what will happen to her next. The observation of crack experts were using GPS devices, satellite images, radar and drones. Carried out several computer simulations to try to predict the future behaviour and growth. But ultimately, scientists can’t give a definite answer, how big it can become. 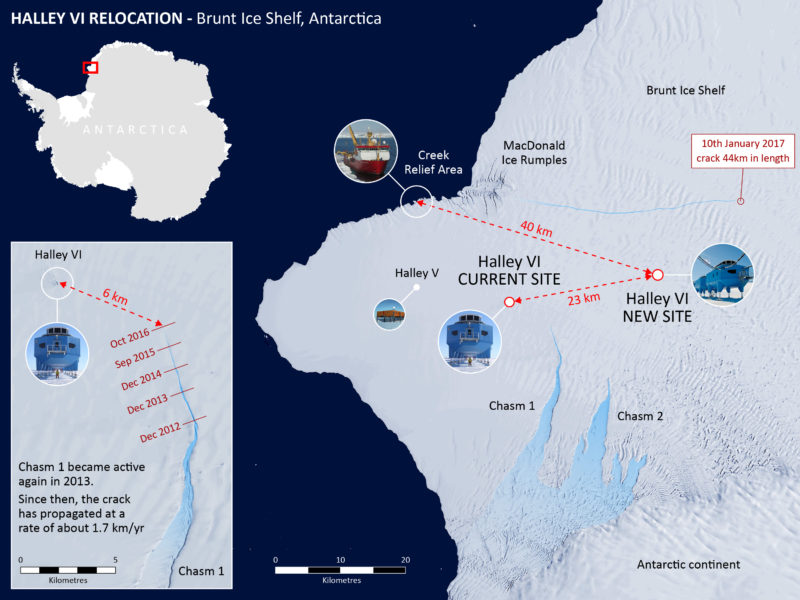 In the middle of the marked current position the last module of the station “Halley 6”. To the right is the new location. Above him a blue line marked the crack is “Halloween” with a length of 44 kilometers

However, experts believe that the crack is unlikely to take a huge chunk of ice the surface of the shelf and lead to the emergence of a new giant iceberg, but as “Chasm-1” is still active shelf, there is still a lot of unknown factors that do not allow you to leave a research group at the station “Halley 6” as a winter inhabitants.

The station is currently assigned 88. However, the staff for the winter months was expected to reduce to 16 people. In these winter months, the station had to operate under the most extreme conditions: temperatures from -20°C to -60°C and a 24-hour polar night. Unfortunately, the events that lead to unknown consequences (do not know the future behavior of the cracks “Halloween” and the shelf “CASM-1”), along with conditions that will not allow in case of danger to help, forced to take the only right decision – to evacuate the whole station staff. Therefore, all researchers must leave the station by March of this year. “Halley 6” will be empty before the start of the Antarctic summer, which begins in November.
“The decision was taken given the high level of unpredictability, combined with the inability to do anything about it in the winter. At this time of the year it don’t fly planes, here the constant night, it is very cold. In General, all these factors force us to evacuate everybody before it’s too late. Quietly, without haste. And then to come back here next summer,” said Stockings in an interview with BBC News.

Despite the fact that the station will remain the people, BAS reports that look for options in which the equipment for climate monitoring and apparatus for monitoring crack “Halloween” will be able to continue working in offline mode during these winter months.
“Of course, we will look for ways and do our best. We will continue the use of satellite images during the subsequent winter months. Next season we’ll send a team to the station again, will check the performance of our equipment and understand further the situation already in place,” explained Stockings.

“We spent a lot of time searching for a new place to station “Halley 6″. In itself, this area is not under direct risk. Rather, there is the fear factor of unpredictability of the behavior of the whole total area of the shelf”, — summed up Stockings.