Are you ready for the apocalypse?

How many versions have you heard about the possible end of the world? Even if you call the exact number and list the options, you will certainly add to your list some more options that will come to your mind in the process of further discussion of this topic.

We all know about the different theories of the end of our civilization. However, there is a whole subculture of people convinced that the end of the world will come to their age (some even confidently call the type of disaster that is about to happen). New Zealand photographer Henry Hagriev conducted a journalistic research and presented a number of photographs illustrating the standard post-apocalyptic dinner of different people. These people unite only one thing – they are already preparing for the end of the world, and therefore, each photo illustrates a real and thoughtful set of products that many of these people have already stocked up.

This dinner will most likely be on the table of Jason Charles, a firefighter from New York. 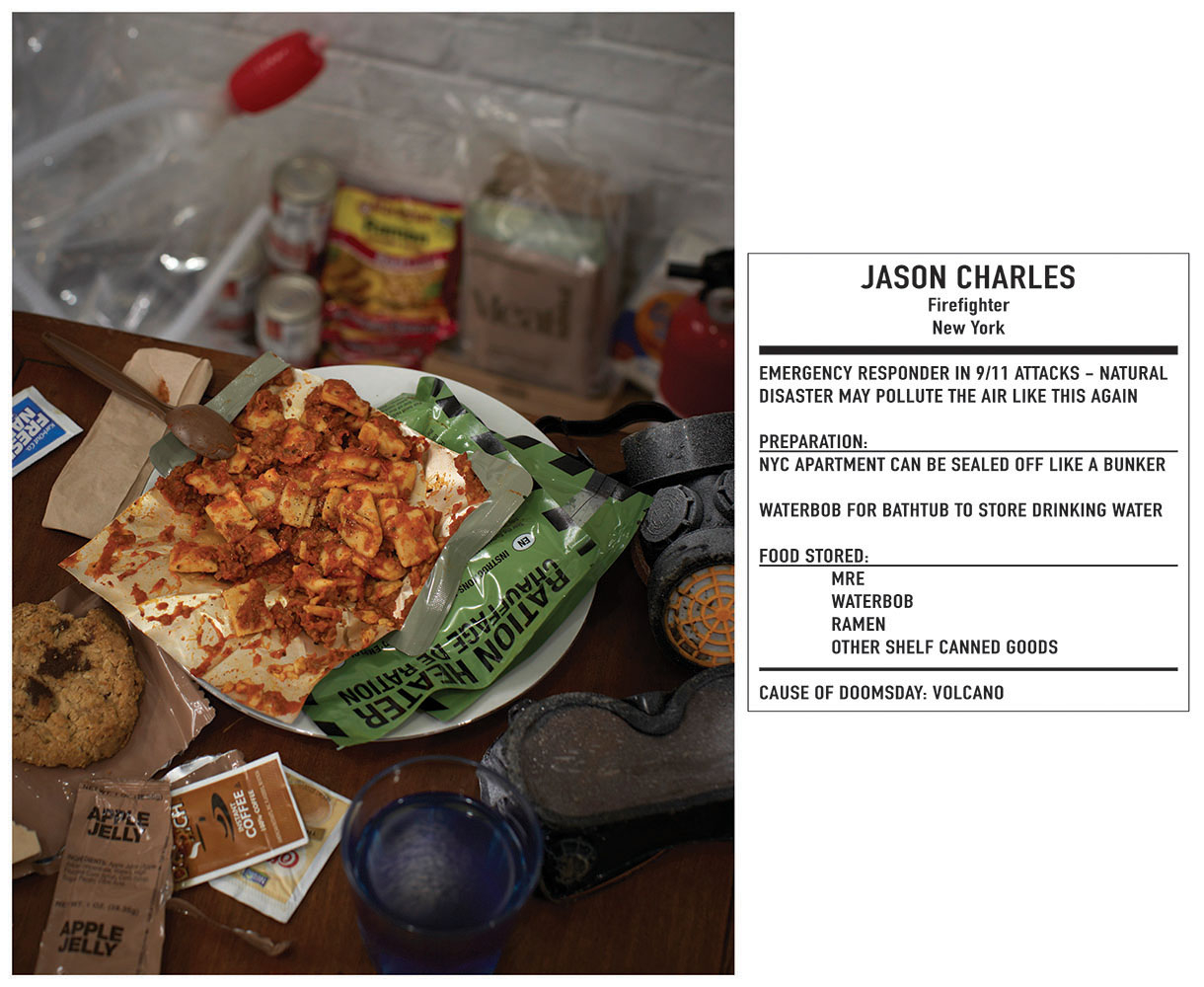 Jason believes that mankind is threatened by the strongest volcanic eruptions. He is already preparing his home in New York for use as a bunker, and he already has a special canister that he plans to use for storing drinking water (he also has a bath at his house, Jason simply thinks that it is not enough). As for food, the man already stocked up with noodles, and various canned foods ready for consumption.

Wilma Bryant expects a blow from the side of the tornado. 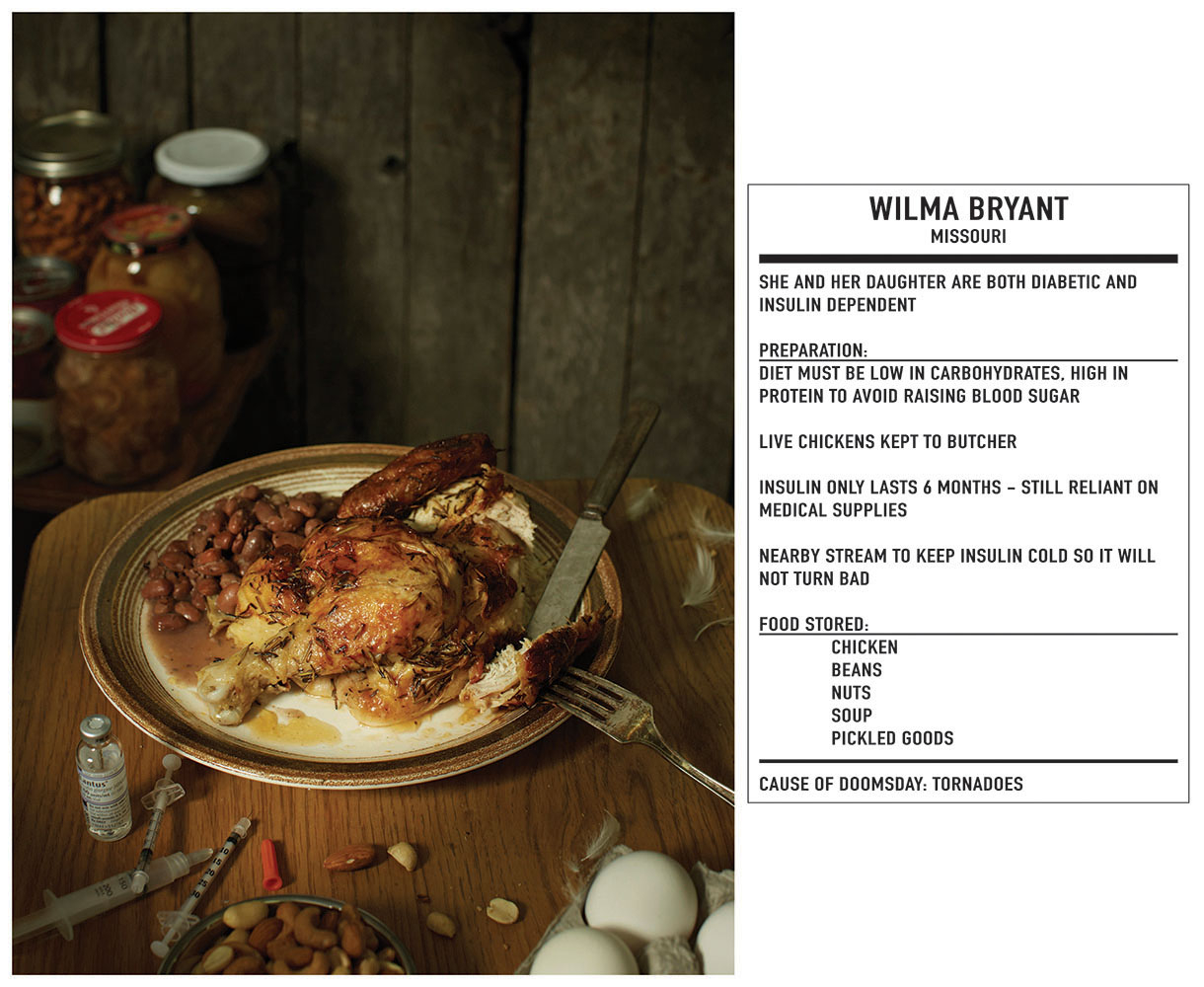 Wilma and her daughter have diabetes. They both need constant insulin injections. They adhere to a strict low-carbohydrate diet, so that blood sugar values ​​remain within normal limits. A woman breeds chickens, who will supply them with food in case of cataclysms. However, a serious problem is the acute need for medicines – the shelf life of insulin is only 6 months – and this only in case of proper storage. Wilma plans to use a stream that runs near her house: in hermetically sealed containers, she can keep insulin in cold water so that the medicine does not deteriorate. As for food reserves, Wilma is going to eat chicken, nuts, soups and various canned foods, including pickled vegetables, corn, beans, etc.

Josh Wander is a Jew, and therefore uses only kosher food. 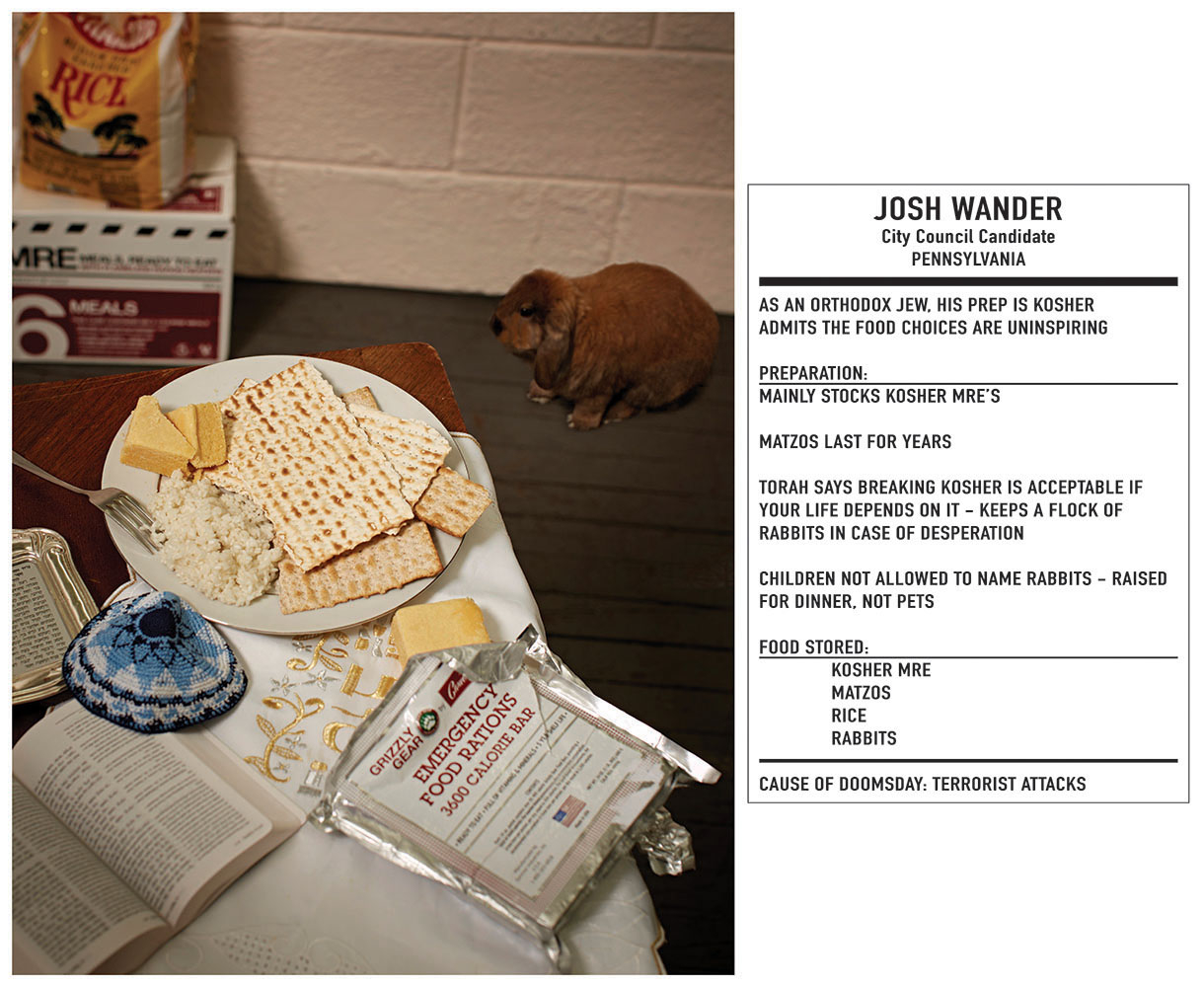 His version of a possible and fast end of the world is terrorism. He also reserves provisions for emergencies, and also keeps rabbits. In this case, children are forbidden to give names to animals, because rabbits are grown for consumption, and not as pets. In addition to canned food and rabbit meat, its diet will also include matzo and rice. 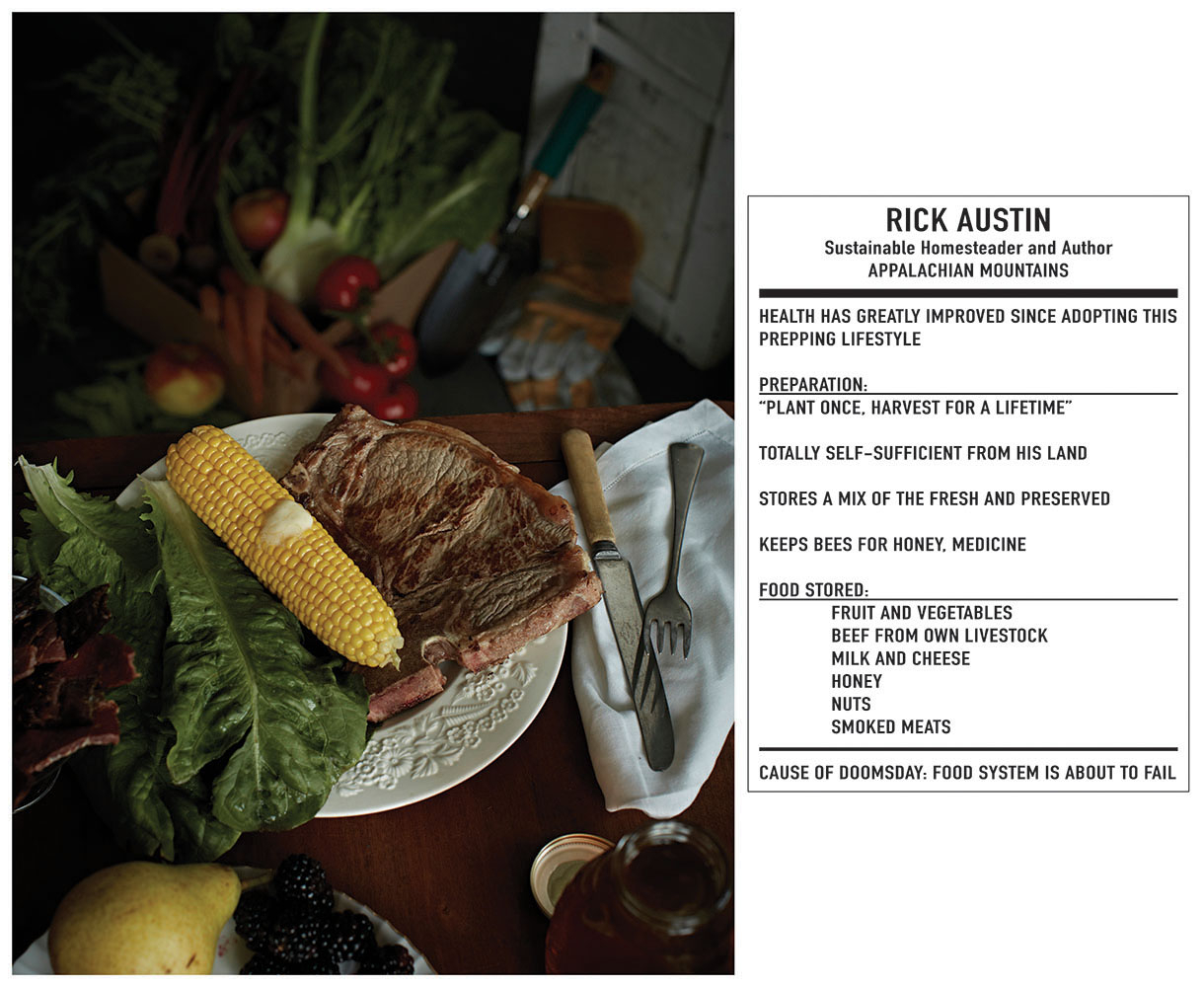 He is sure that a common food system will lead mankind to epidemics and diseases. He is a supporter of the natural way of life. All the foods that Rick uses for food, he grows himself. Rick contains a fairly large farm, including cows and bulls, and also grows all the vegetables and fruits he needs (he also harvests them for the winter). Among other things, he keeps bees, so he always has honey.

John Mayor lives in Idaho and conducts business in the cultivation of cereals. 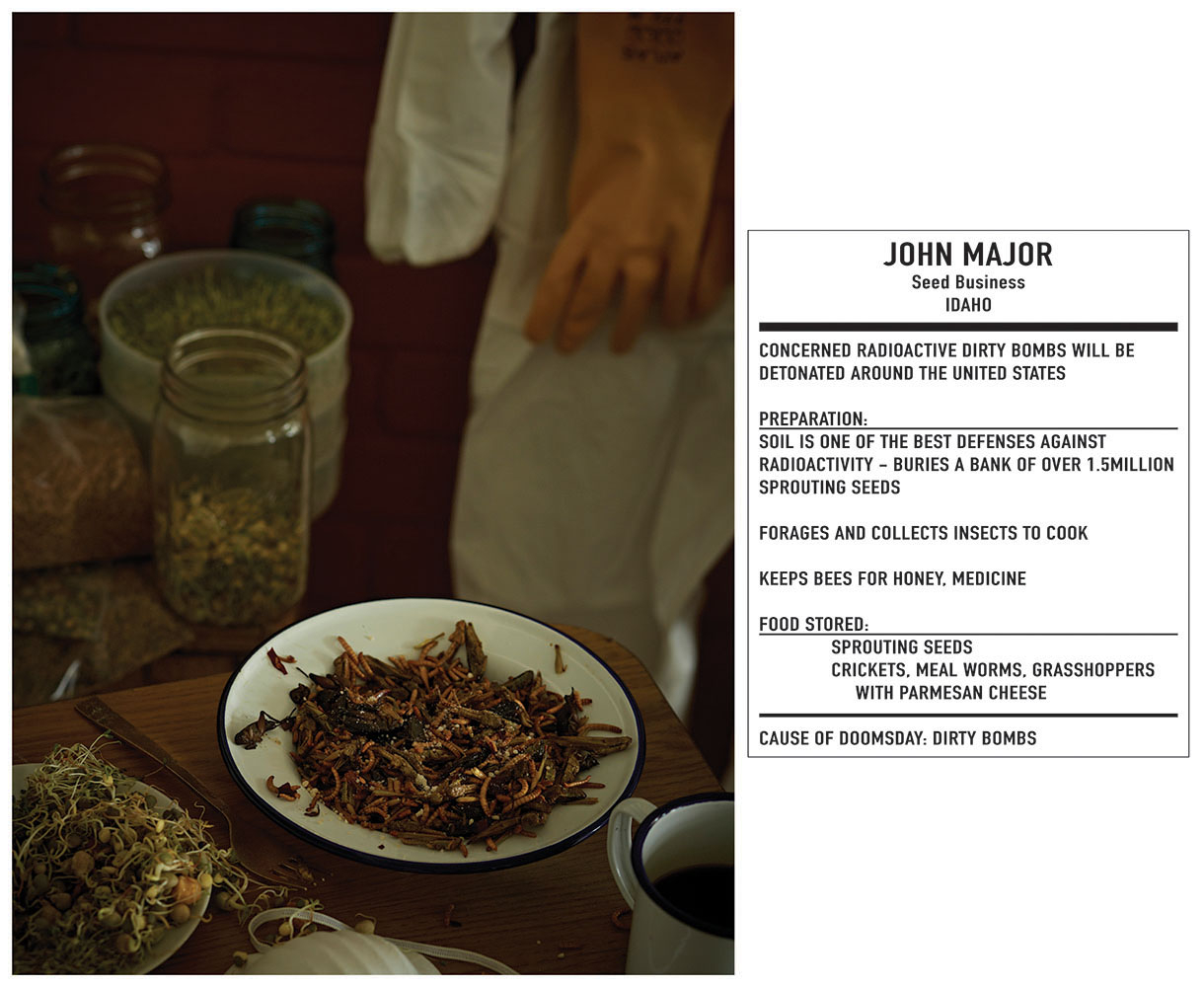 He is confident that the United States at any time can be exposed to nuclear bombing. Since the soil is the best protection against radiation, there is a deep cellar in his house, in which he stores grain stocks of different varieties. He also harvests various insects for later eating and keeps bees, as a source of honey. In addition to insects and cereals, Parmesan cheese is also included in its menu.

A freelance educator from Utah, Kellen Bishop, believes that the world is on the brink of a financial disaster. 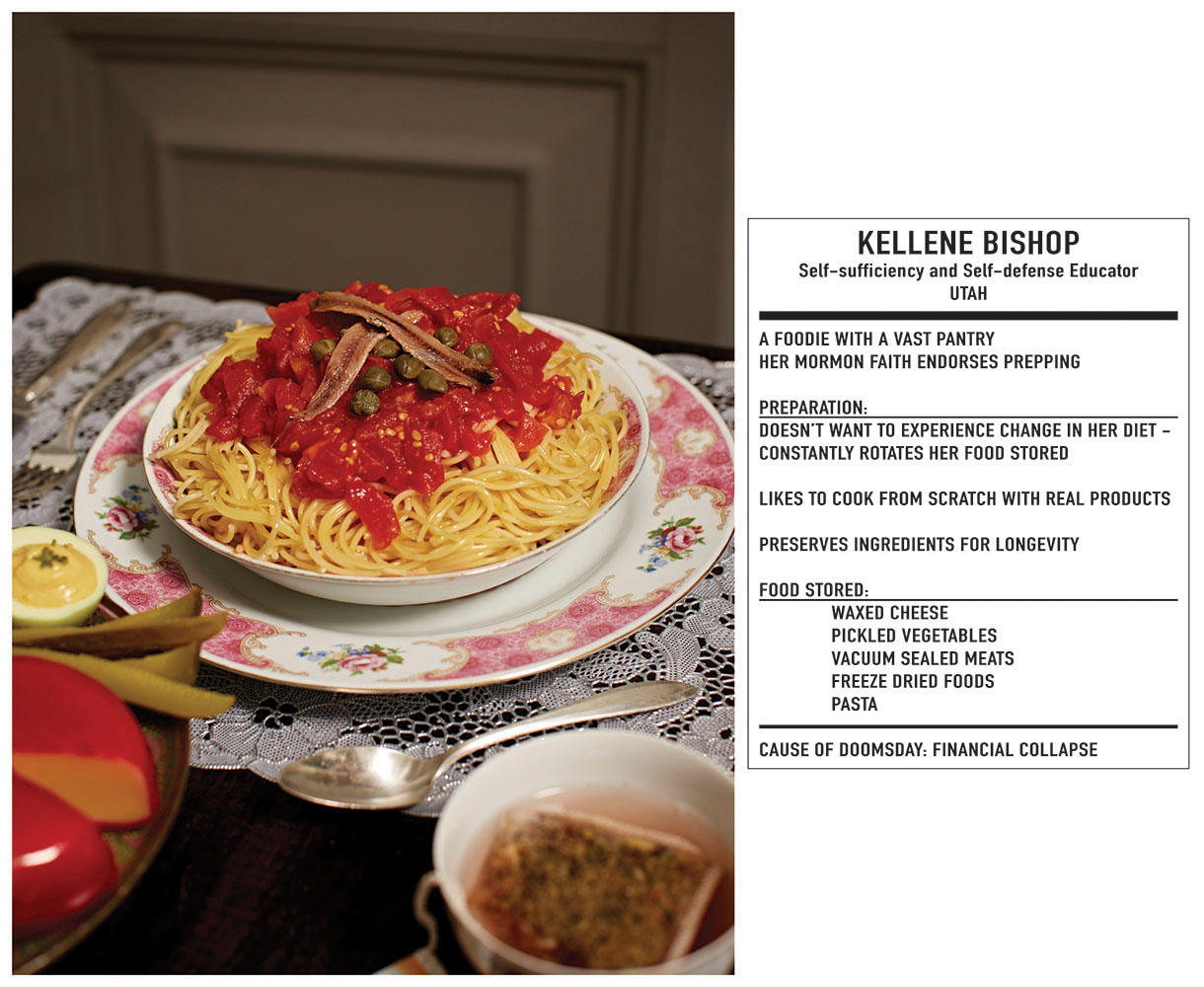 She prepares for the apocalypse in the way the Mormon faith dictates. Her last meal will not be different from the usual: cheese, pickled vegetables, meat in vacuum packing, frozen and dried foods, tomato paste.