Astronaut did the “checkerboard” on the surface of the Earth 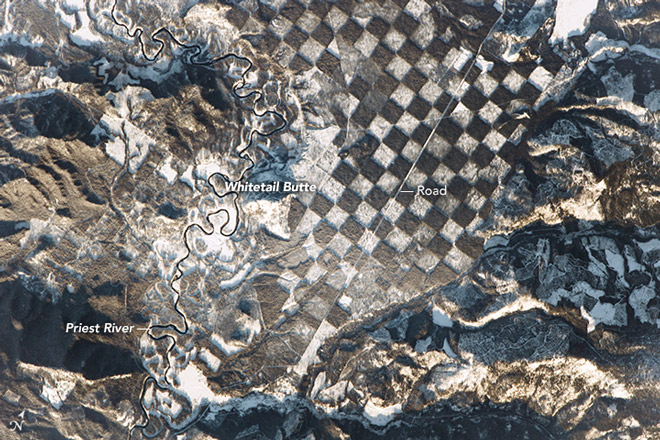 The astronaut on Board the International space station, flying above Northern Idaho (USA), noticed that the land along the river, the priest resembles a real chess Board. The picture was taken shortly before sunset, so some of the slopes lit by the sun, while others are long shadows. Who left this mysterious pattern?

White squares represent snow-covered areas where the trees have been felled. These sections alternate with dark green-brown “cells” dense forests, where the trees obscure the snow.

The appearance of the checkerboard is due to the agreement made in 1800-ies, according to which the American government granted the Northern Pacific railroad (Northern Pacific Railroad) every other square mile of forest. Later the plots were sold, and in many cases used for logging.

The principle of the checkerboard “cells” which have since been reduced to a quarter of a square mile, now allows you to maintain sustainability of forests through selective cutting. District Whitetail Butte has historically been used by the Forest service as a lookout to monitor forest fires.

The dense vegetation acts as a natural filtration system to nearby rivers, maintaining water quality on deprived forest hillsides prone to erosion. For nearly a century, the priest river was used for floating logs. In 1968, its main channel was listed as “natural picturesque ponds” to preserve its “outstanding natural, cultural and recreational resources for present and future generations.”