Australian coast covered with a blanket of jellyfish 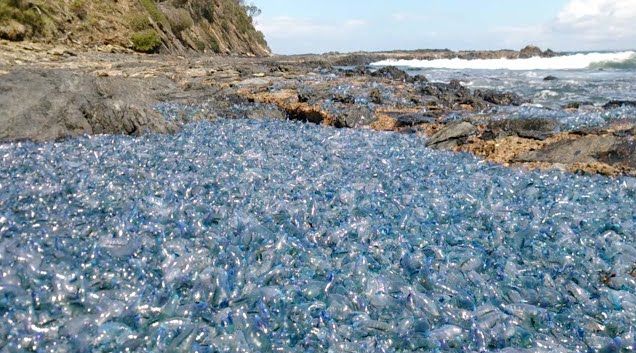 Octopus – not the only marine resident, creeping out on land. It seems that jellyfish also want to bask in the sun, at least until their bodies evaporate.

A resident of New South Wales, Brett Wallensky discovered a carpet of aquamarine jellyfish, known as the Blue Bottle or the Portuguese warship, while walking along the beach of Barlings. With each wave more and more jelly-like creatures settled on the rocks. According to Wallenski, despite their bright colors and the balloon-like body, what he saw reminded him of a scene of nightmares.

With their powerful poison, even dead jellyfish, washed on land, are still able to sting. The species is quite common in Australia. Last summer, dissatisfied beachwomen reported that they flooded the beach, although the cause of their appearance on land is unknown. These jellyfish are siphonophores, that is, instead of being the only creature, they are colonial organisms consisting of separate “zooids”, each of which has its own functions.

The number of jellyfish grows. According to scientists, this can be caused by climate change, as the warming of water creates a favorable habitat for them.