Australian surfer flew over the head of a white shark 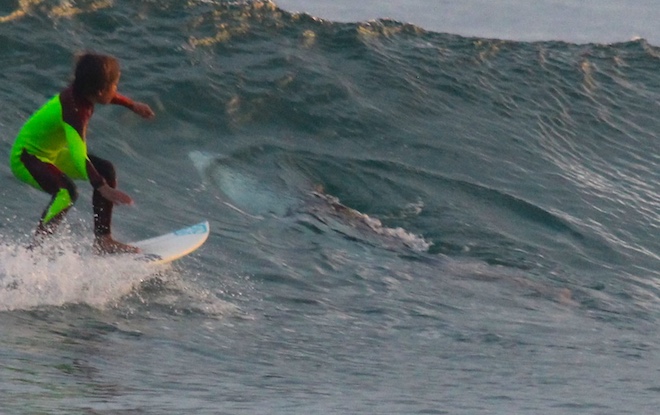 Australia is famous for its wildlife, dangerous and, at the same time, attracting outdoor enthusiasts and adventure seekers. The culmination of this paradox can be called a photograph posted to Facebook by the Australian Chris Hasson last week.

During a holiday in port Stephens (New South Wales) Chris, were on the shore photographed his ten year old son of Eden — an avid surfer. Suddenly, the lens appeared a huge dark figure.

“I see something big and dark, already thinking about what to call the group of rescuers, but the appearance of Eden, riding next to ox, makes this figure move. — so Husson commented on the photo. — When my son started to row back to shore, I enlarge a photo with unusual shape and I understand that Eden has just made the jump over the head of a white shark!”.

Fortunately, the boy was not injured, and the photos of extreme surfing gained popularity on the Internet. As admitted Eden, he had no idea that he was going to crash into shark. “When I came on Board, I think I see something, and when did the first jump, my Board hit something, but I thought it was algae,” — said the boy.

Close encounter with a dangerous animal impressed, but, apparently, did not bother Chris Hasson and his family. As stated by the man in an interview with the newspaper “the Newcastle Herald”, his son and other family members know well the safety rules for sharks and Eden returned to the water the next day after the incident.

“I surf in this port for 30 years, and, of course, there are sharks and will always be, but in most cases, problems did not arise, — the man explained. — If being in the ocean I see a shark, rowed to the shore and change the beach.”

Despite the reputation of murderers and cannibals, sharks attack people very rarely, a fatal outcome of their attack end rarely. According to the Museum of natural history of Florida since the 1700s in Australia 607 documented cases of unprovoked shark attacks.