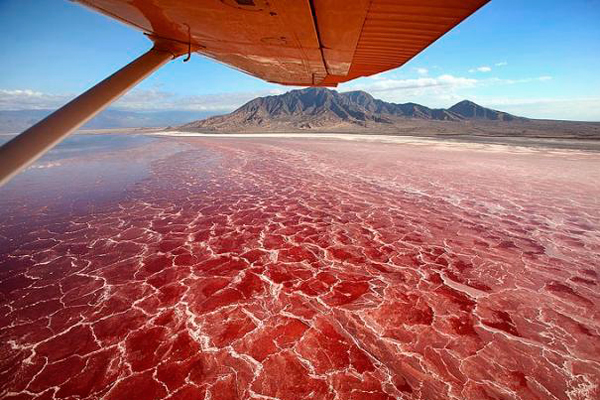 The lake Natron – the salty lake located in the immense African Great rift valley – in the north of Tanzania, near border with Kenya and slightly to the northeast of Ngorongoro Crater. Hidden between volcanic hills and deep craters, the lake Natron is in the lowest point of the rift valley – at the height of 600 meters above sea level – and, perhaps, is the most alkaline reservoir in the world. 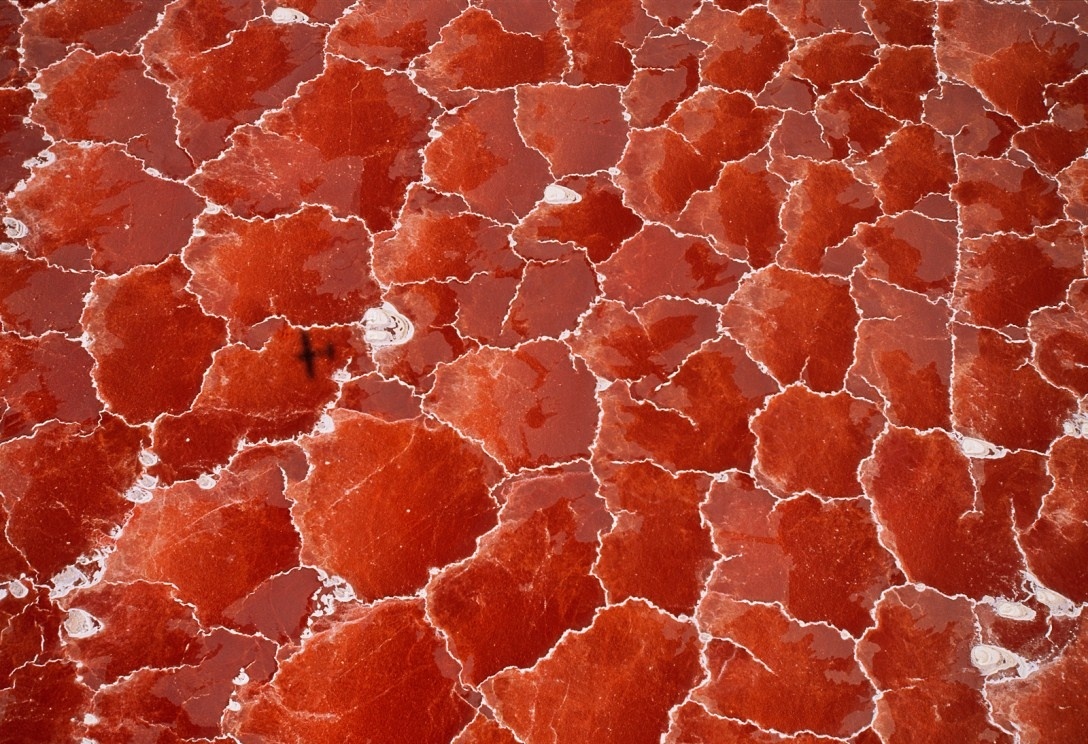 The plane casts a shadow on the bright red surface of the lake Natron in Tanzania.

Whether it is possible to swim in such lake and whether there is life there? 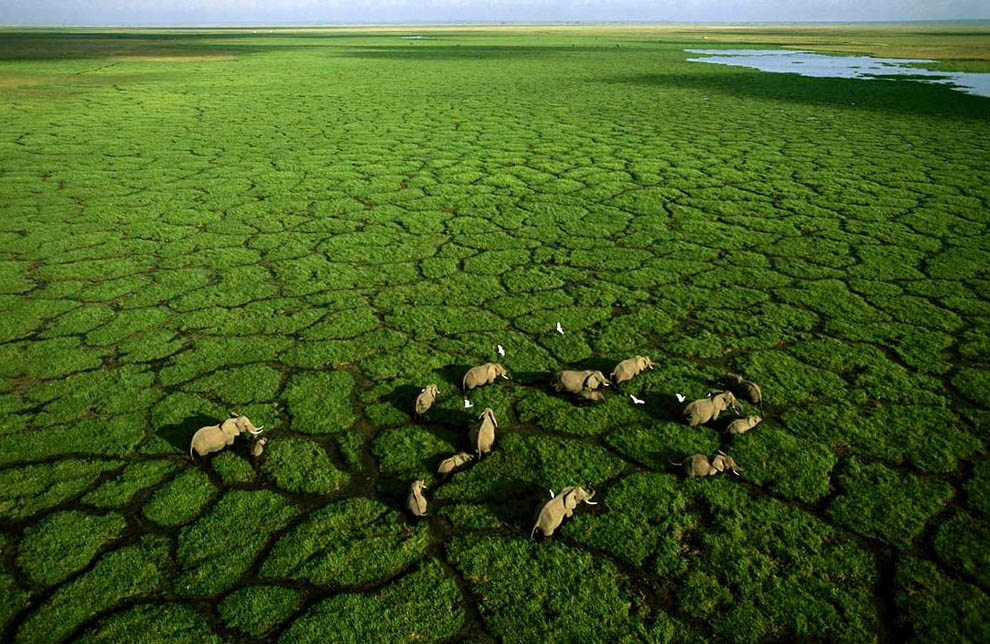 And here to you one more boggy place of Africa is pure for contrast.

The lake Natron (Lake Natron) is translated as “red”, because of the special color which to it is given by some microorganisms appearing at excessive increase in level of salinity and a causeticity. The main such organism is cyanobacteria, a tiny bacterium which, as well as plants, absorbs light by means of a photosynthesis. As a result comes izmeneneny pigmentations of this surprising bacterium towards red color from the collected photons and millions of lake Natron of bacteria of a look cyano formed in alkali, give deep red color all to a water surface. Only in shallow water where these bacteria a little less water has already not brightly red, and orange color.

It really the nature wonderful cloth drawn with local God by the name of Lengay, the primogenitor of all real on Earth at tribes of a masaa. 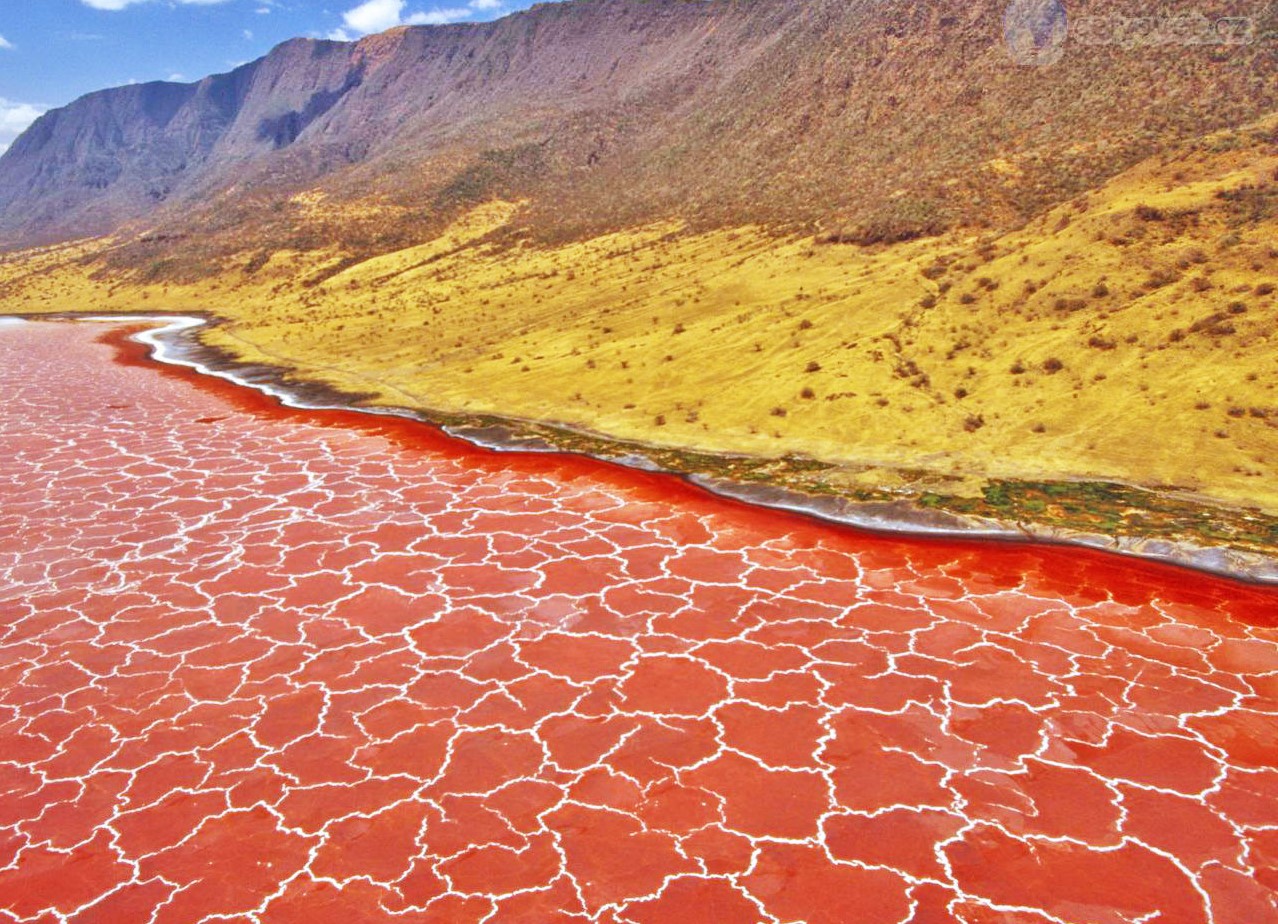 The total area of the reserve makes 700 sq.km. 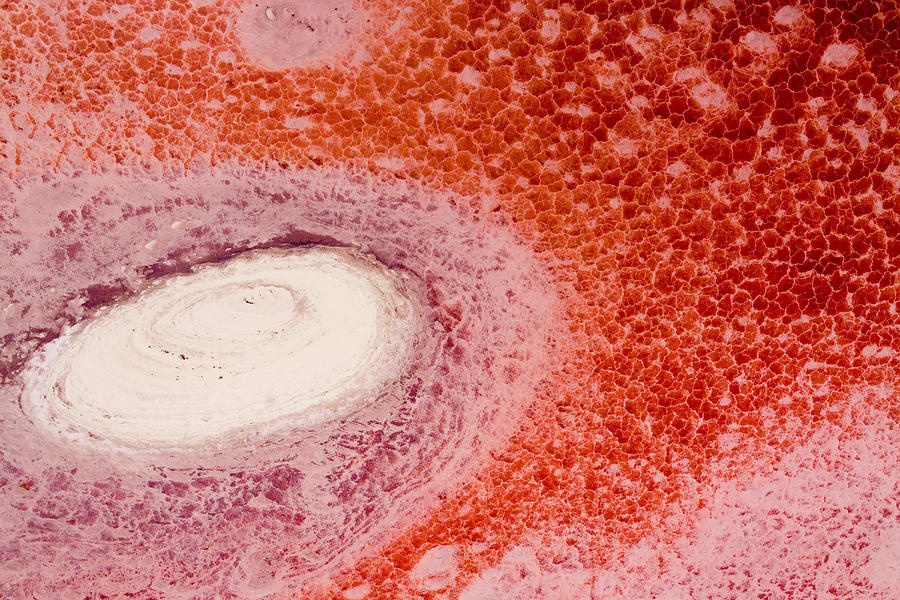 You should not swim in the lake Natron. Any contact with alkaline water threatens with burns and swellings of skin – it is better not to risk. However, from one view of the lakes scattered around skeletons of animals and birds and their limy mummies it will become clear that it is close to Natron better not to come nearer. 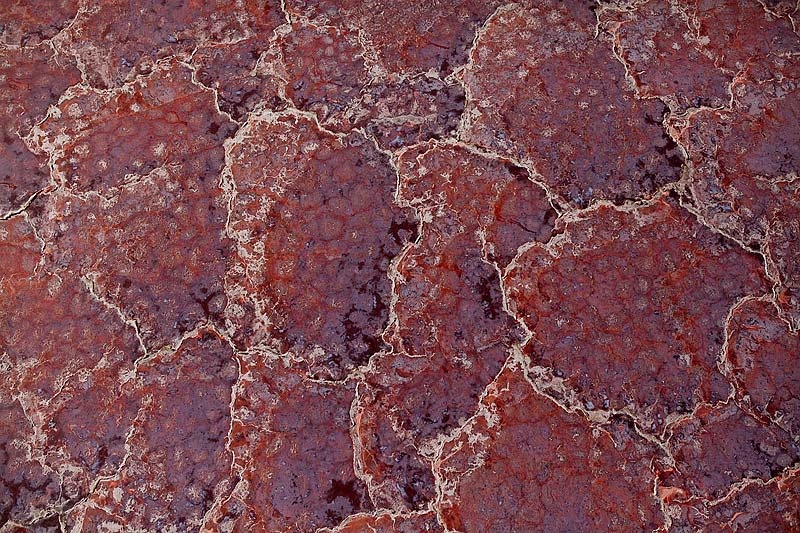 The similar dyscomfort most often comes true what was seen. Exactly here, near this Dead Sea of Tanzania there is one of sacred places of Ancient Africa – a volcano Ol Doynyo Lengay that in translation from language of the tribe of a masaa is meant by “the Mountain of Gods” or “the Mountain of Perfume”. This volcano is one of “LIVE MIRACLES of TANZANIA” today, in more detail about which it is possible to read in the fascinating article “Why Volcanoes of Tanzania Do Not Sleep?”.

According to some information, Ol Doynyo Lengay for the last time woke up in October, 2008 and did not fall asleep. According to the freshest data, the volcanic eruption was observed also in 2010 that probably, is caused by body height of discontent of “gods living in a volcano muzzle”

The fissile discussion of construction of the plant on processing of soda on the bank of the lake Natron – directly at the bottom Ol Doynyo Lengay could become one of the main reasons for their discontent. Plans for construction of hydroelectric power station on the northernmost tip of the lake could become the second reason – that would provoke change of alkaline balance in the lake.

Anyway, the reserve of the lake Natron including the sacred mountain even more often is exposed external the large companies that breaks a zone of rest and can provoke, according to shamans from the tribe of a masaa, “anger of gods” Ol Donyo Lengay. 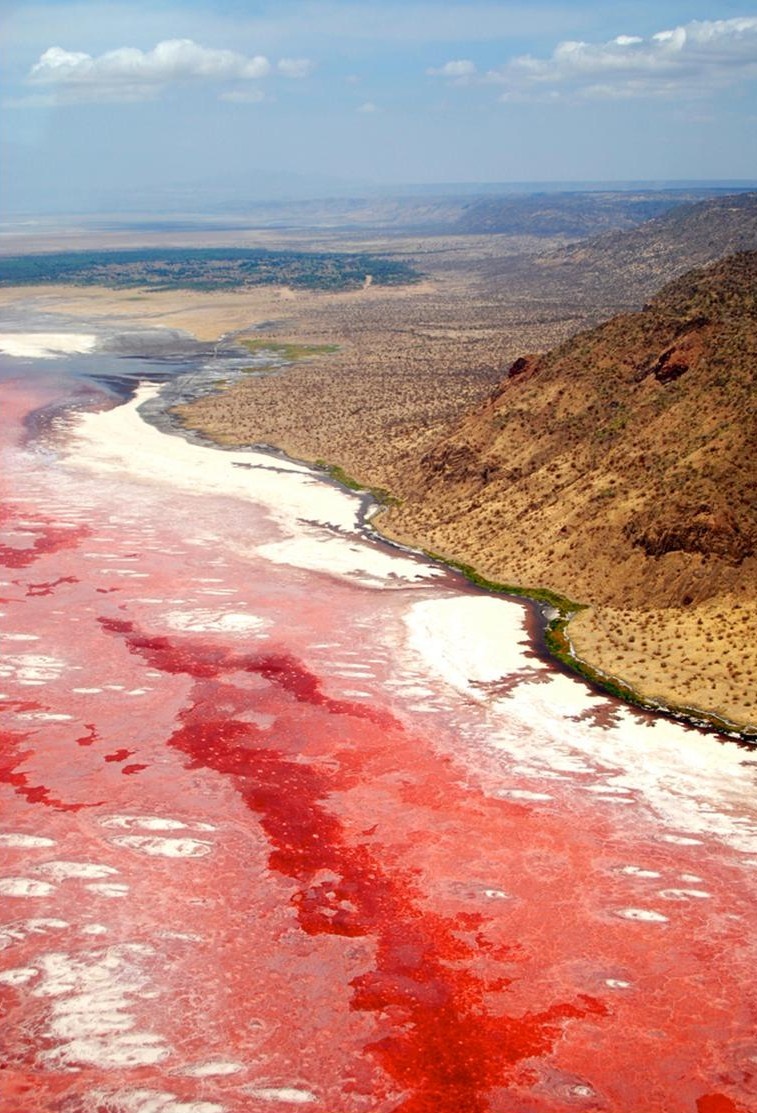 The lake Natron in Tanzania is fed by the river Ivaso Nyiro (“The river of brown water” in translation from language of the tribe of Samburu) and hot springs rich with minerals.

At the strong evaporation on the surface of the lake the crust is formed of alkaline salt which is also often painted in red or pink colors as a result of activity of the microorganisms living in the lake.

In process of evaporation of water during a dry season, salinity of the lake increases to that level when the microorganisms living in it – fans of salt – begin to breed violently.

These organisms living in conditions of high salinity – galofilny cyanobacteria – have ability to a photosynthesis, also as plants. In the course of a photosynthesis the red pigment which gives brightly red color to deep water and orange more shallow is allocated. 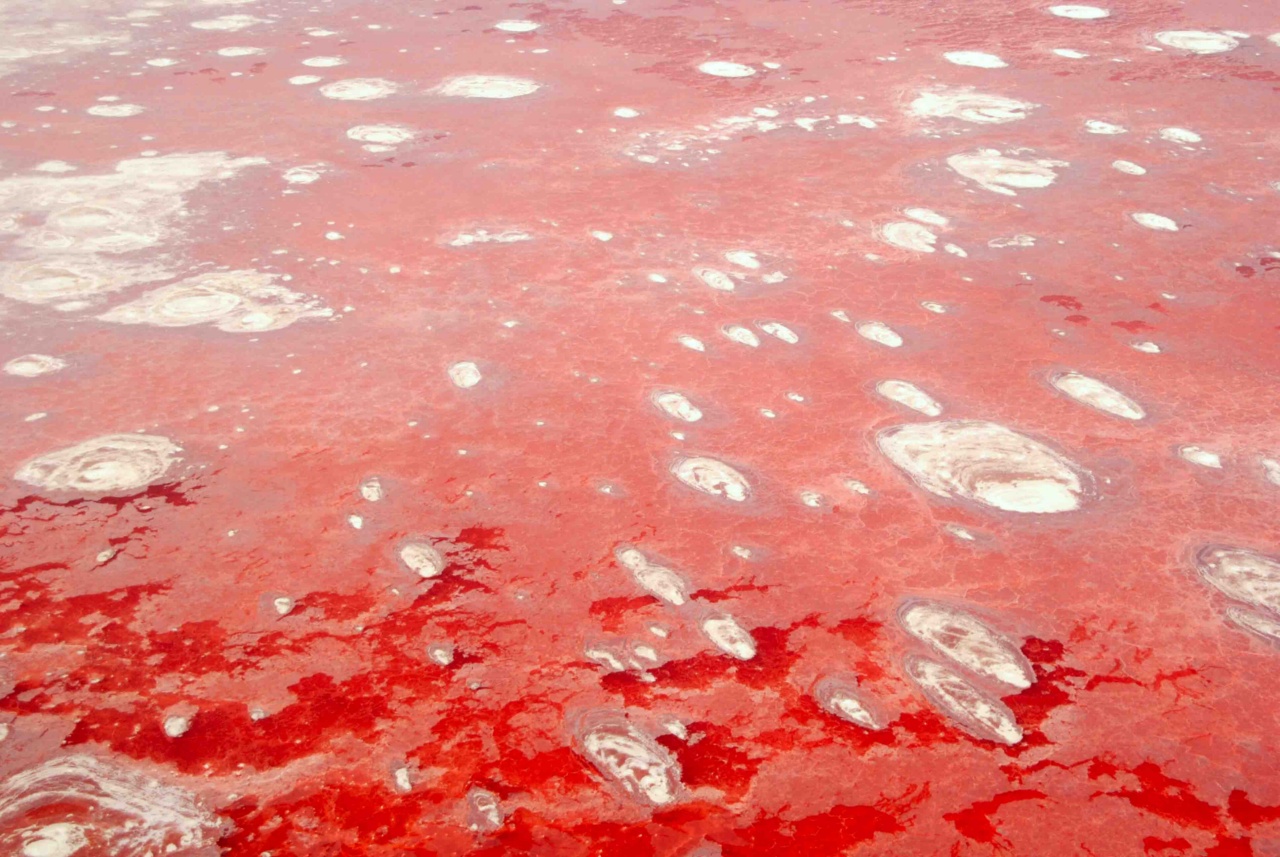 And the lake is the single area of manifolding for 2.5 million endangered Small flamingos which live in the valley.

These flamingos accumulate along salty lakes in the area where they eat Spirulina (Xing — green algas with red pigments). The lake Natron — the single place of manifolding for the Small flamingo because its diabrotic surrounding medium is a peculiar barrier against the predators trying to reach nests of these birds.

Temperatures in boggy places can reach 50 degrees Celsius (120 degrees Fahrenheit), and depending on rains, the causeticity can reach pH of a factor from 9 to 10.5 (almost so alkaline as ammonia).

In 1962, because of the heavy rains, there was a flood. According to the estimates of experts more than one million eggs were destroyed. 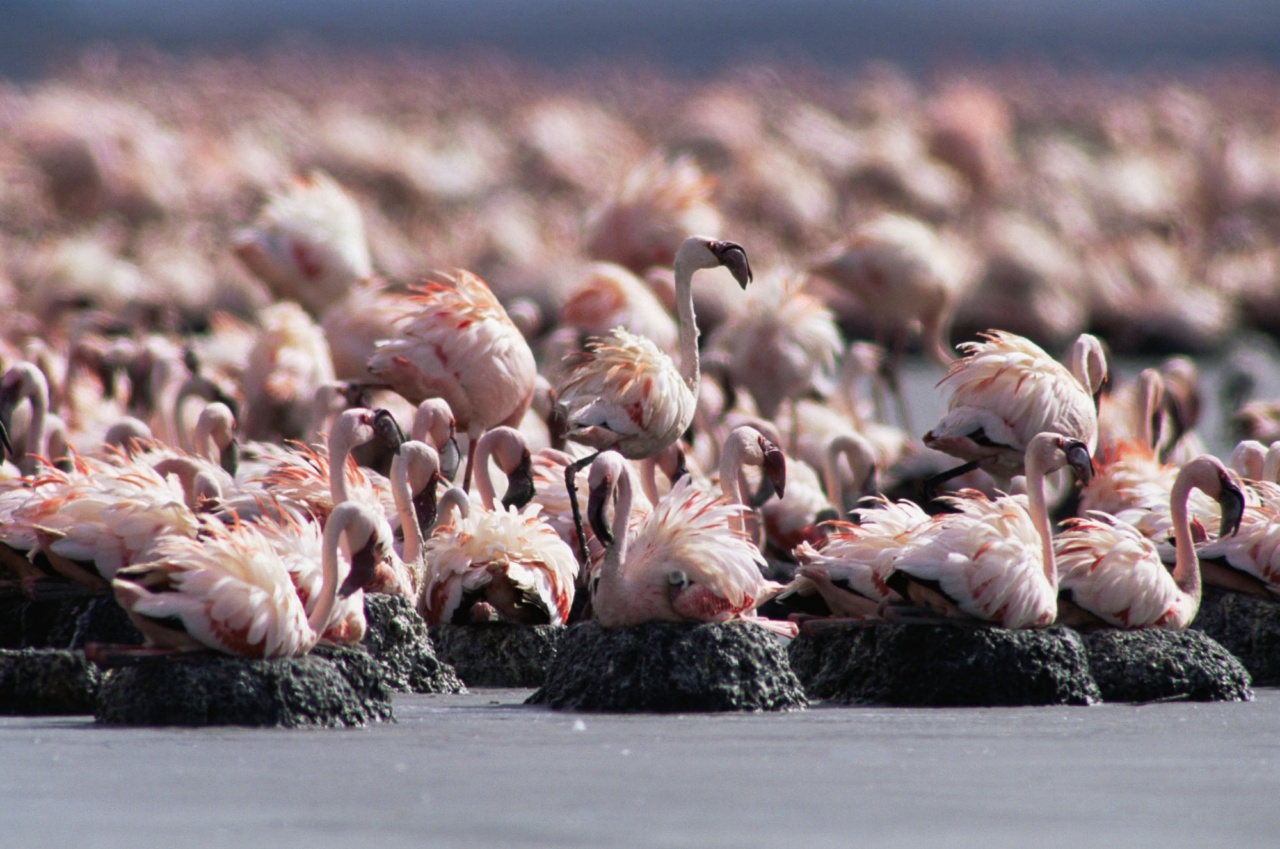 Threats to balance of salinity from the increased inflows of sweet water go from the designed loaded watersheds of the lake Natron and the planned work of hydroelectric power station. Though development plans include construction of a dam on the northern end of the lake to contain sweet water, disolution threat still to be serious. 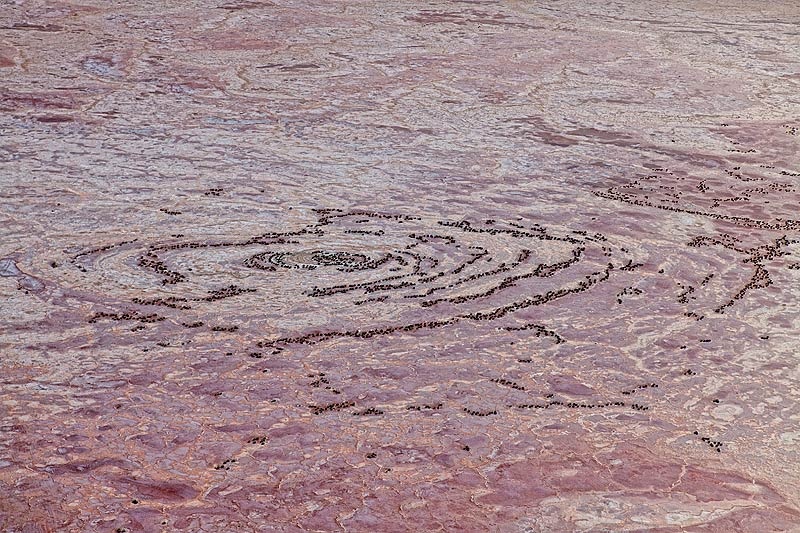 The new threat to the Lake Natron is a development of the plant on processing of soda on coast of the lake. The plant extorts water from the lake, and then by chemical processes extracts soda to transform it to soap powder for export. Also about the plant housing for more was built, than 1000 workers, and coal for power plant is brought to provide energy for all complex of the plant.

Because of the unique biological variability Tanzania called the Basin of the Lake Natron to the List of Boggy places of the International value – Ramsar, on July 4, 2001. 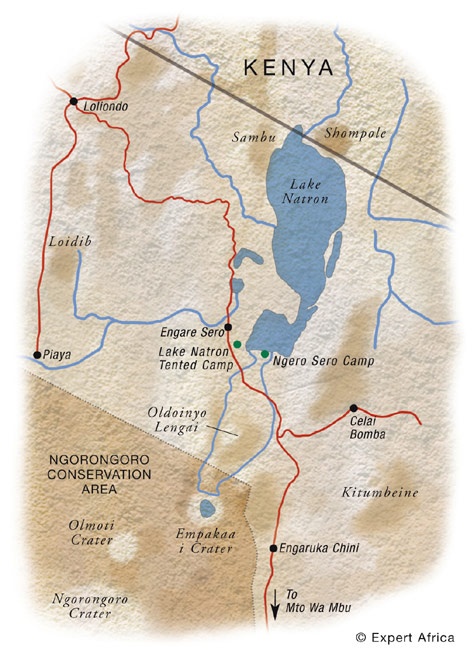 The southern hunting grounds of the reserve settle down to the North from Arusha in the well-known Masai Steppe of Maasai Steppe), stretched on 1500 sq.km. In the West they border on a security zone of Ngorongoro, and in the North and the East with Keny and the lake Natron, respectively. In these territories two constant luxury campings and two adventure mobile camps (adventure fly camps) settle down. The demi-season camp “Kiserian adventure camp” offers placement in the valley with tremendous views of Mount Kilimanjaro and magnificent opportunities for hunting of a gazelle of Grant and Thompson and in the North of a reserved zone – on a gerenuk and small Koudou. 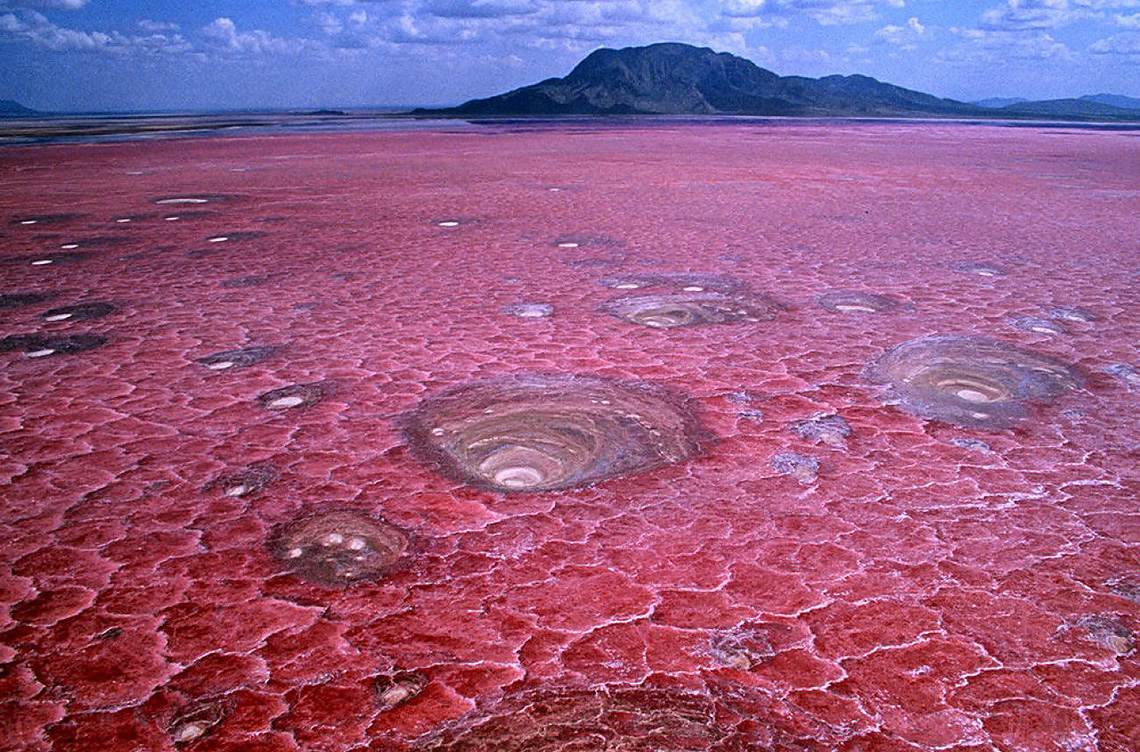 Not less beautiful place for overseeing by life of lands Masayev, is the magnificent camping of “Kitumbeine luxury base camp” located at the mountain Kitumbeyne like (2800 meters) where savanna acacias grow. The camp is at the foot of this mountain and offers panoramas, inexpressible on beauty, overlooking mountain ranges of the Great Rift Break and on the white smoking cap of still active volcano of Olduvay. Here one of the best places for hunting on oriks, a mountain buffalo and a big leopard.

Northern hunting grounds (Lake Natron North Game Control Area) 0 are much more extensive. They pass along border of Tanzania and Kenya, to the East from the lake Natron where the mountain chains of the Great Rift Break covered with the heavy-bodied massif of the mixed rainforest where mountain buffalo s — the singular trophy of Masaylend remained in a great many tower. It is possible to settle down in one of two peredvizhna of hunting camps which will deliver together with provisions by planes from Arusha or Kilimanjaro. 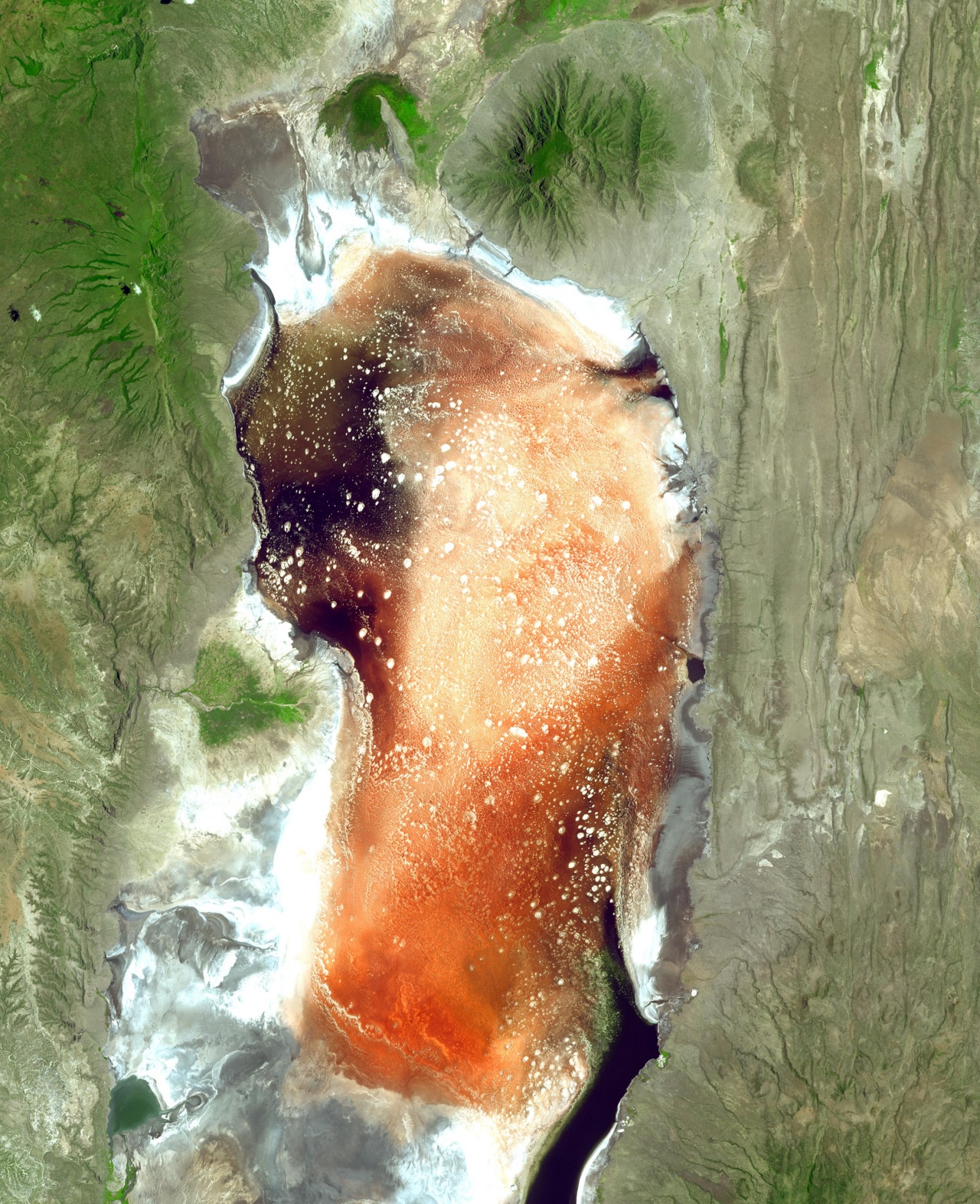 Here the wildest and netoptany person area, than in the south. Because and villages of the original African tribe of a masaa seem especially organically fitted into a landscape of the reserve of the lake Natron here. These are one of the best places for a photosafari. Only present a red smooth surface of water with the same red haze in which thousands of small flamingos sink on the horizon, painting as if involuntarily the wings in orange and pink shades.

Among the allowed species of a game also large antelopes are also accessible: oriksa, pattersona and larger Koudou. Perhaps also hunting for feathery inhabitants of the northern woods of the reserve of the lake Natron. Among local population there is Masayev especially in the price meat of a ryabk, a pigeon and quail. 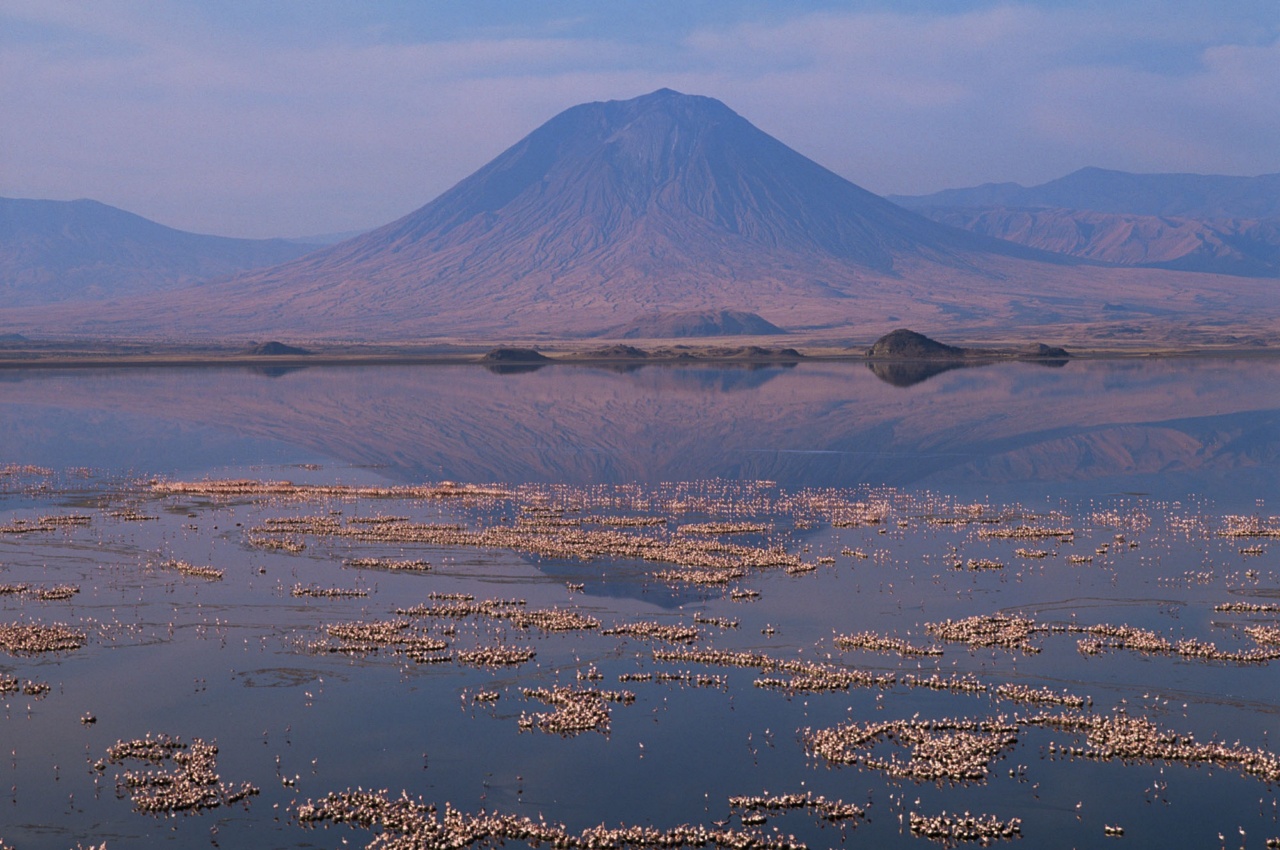 Roads to the lake are quite broken, and generally it is possible to reach only through Arusha or park of the lake Manyara (5-6 clocks). But, nevertheless, the local route is one of the most almost impassable in comparison with other tourist zones. Alternate “route” of a safari-trofi to the lake passes through east corridor of Serengeti – Loliondo.

What to be engaged in

To watch flamingo packs on the lake Natron, to rise to the most cold operating crater to the world – Ol Donyo Lengay, to arrange a safari on antelopes. 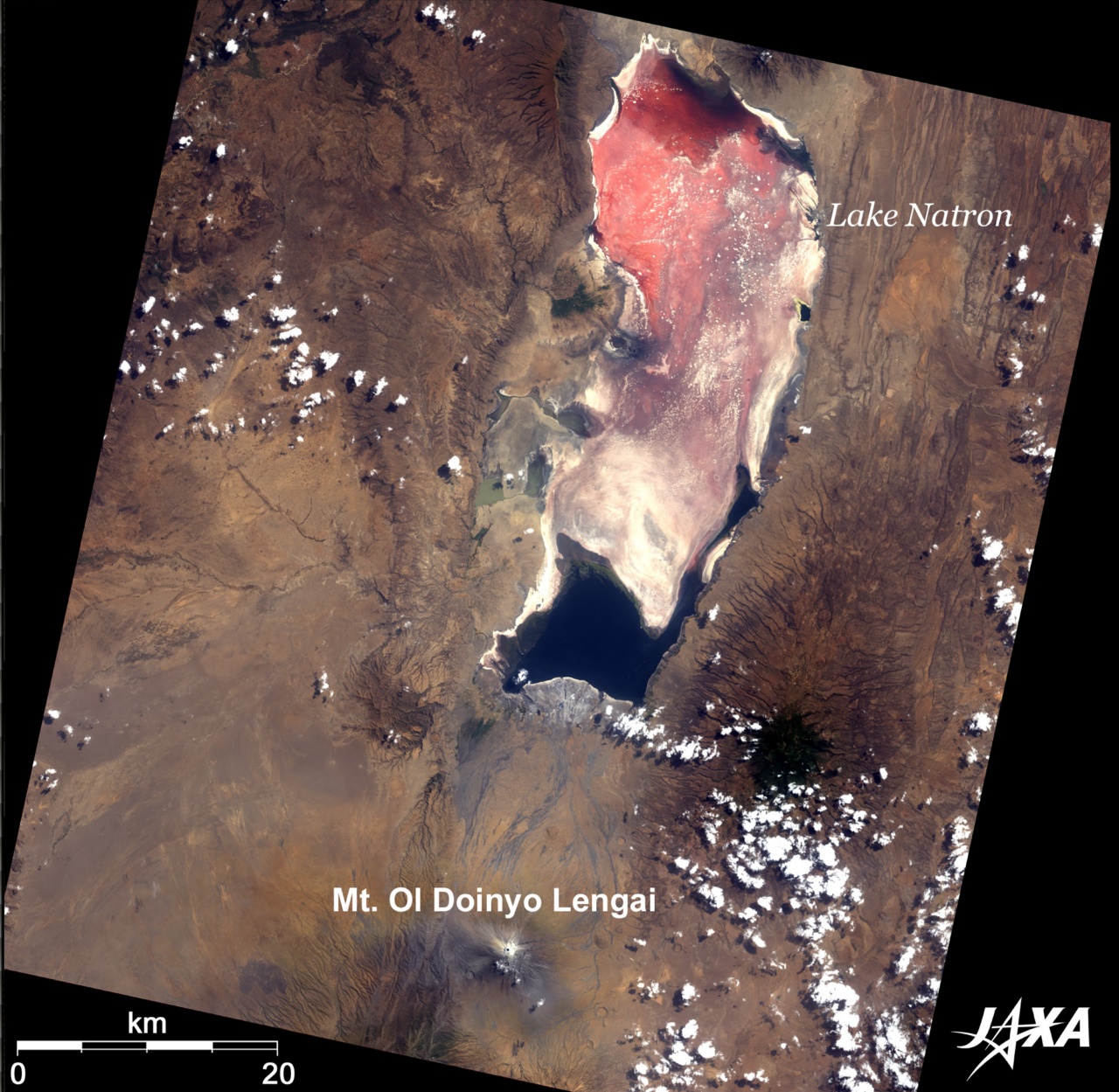 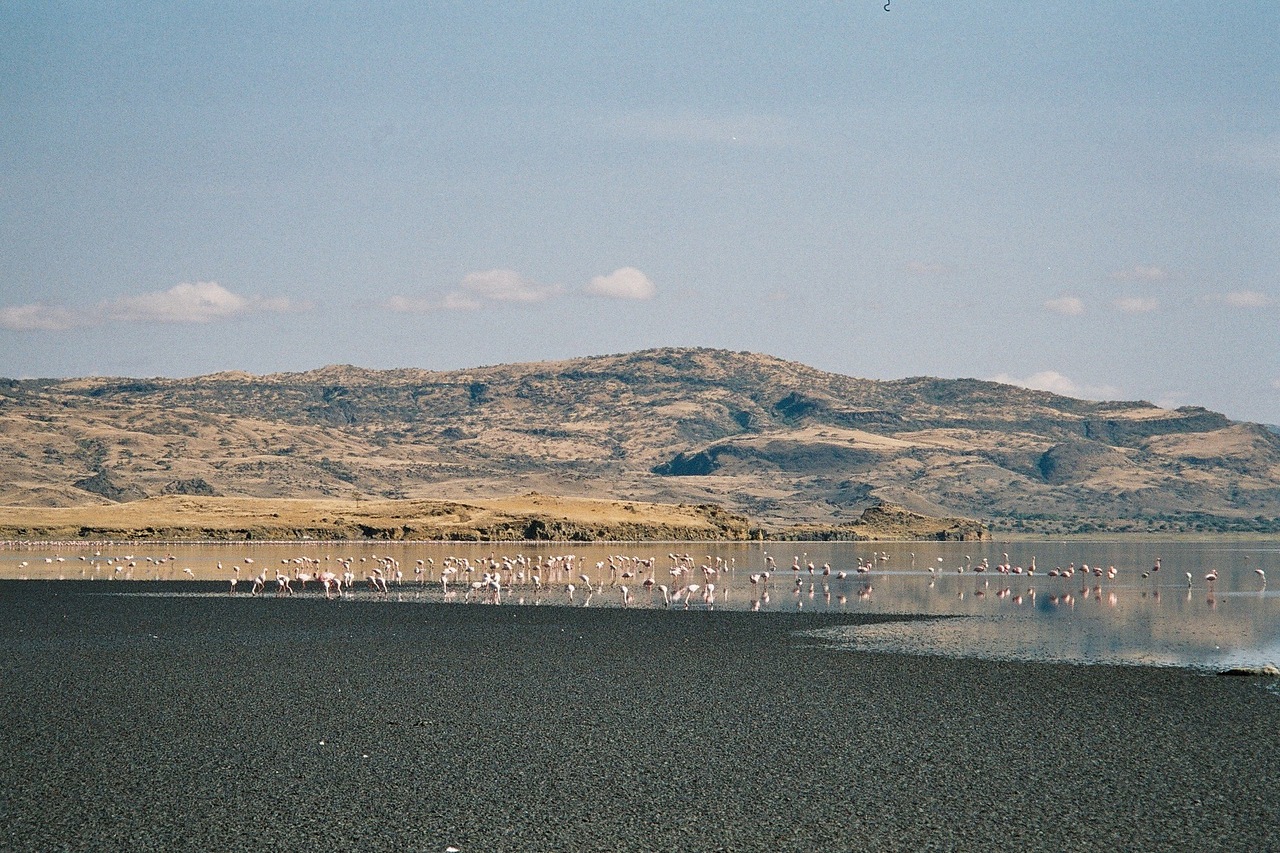 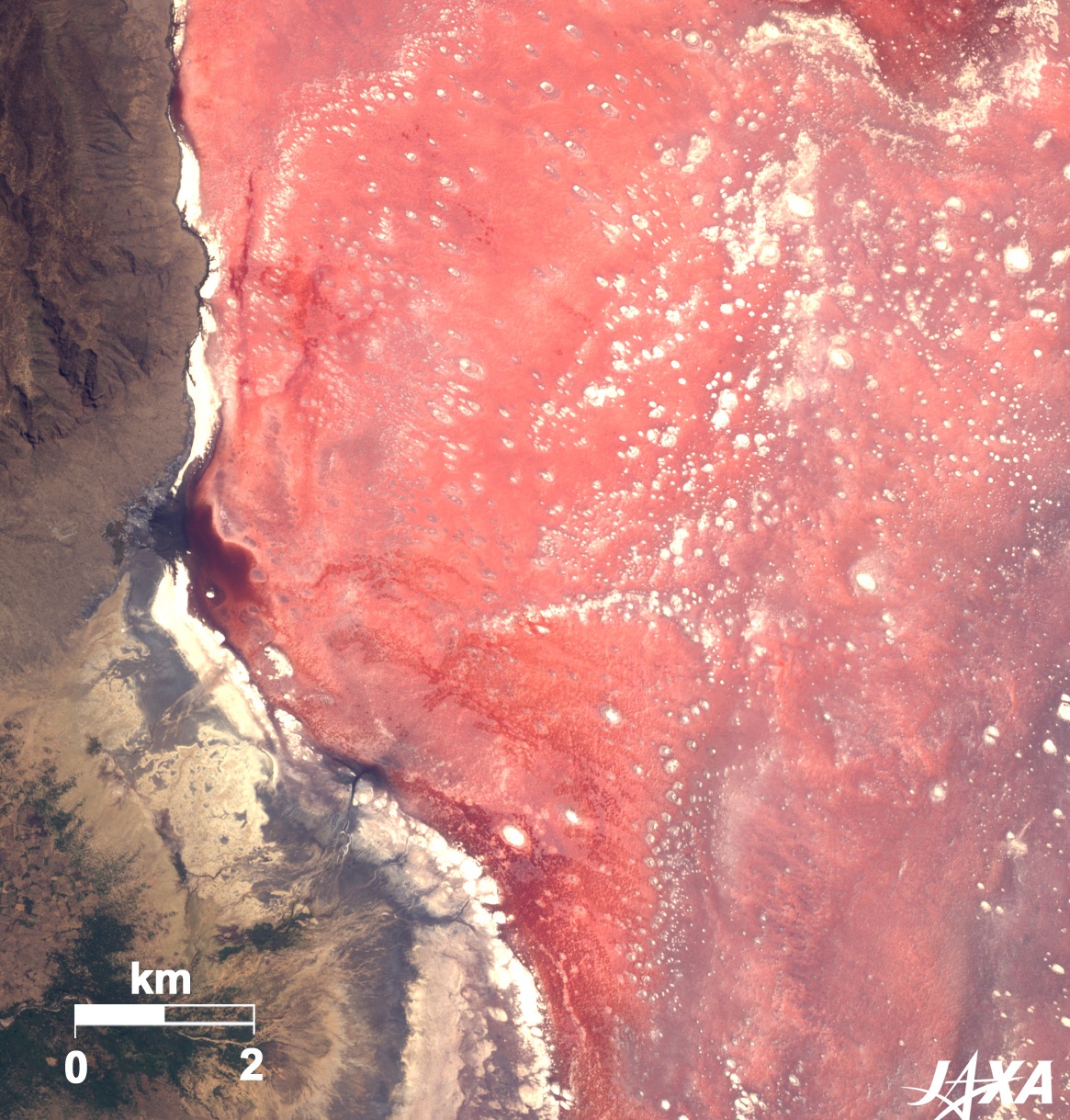 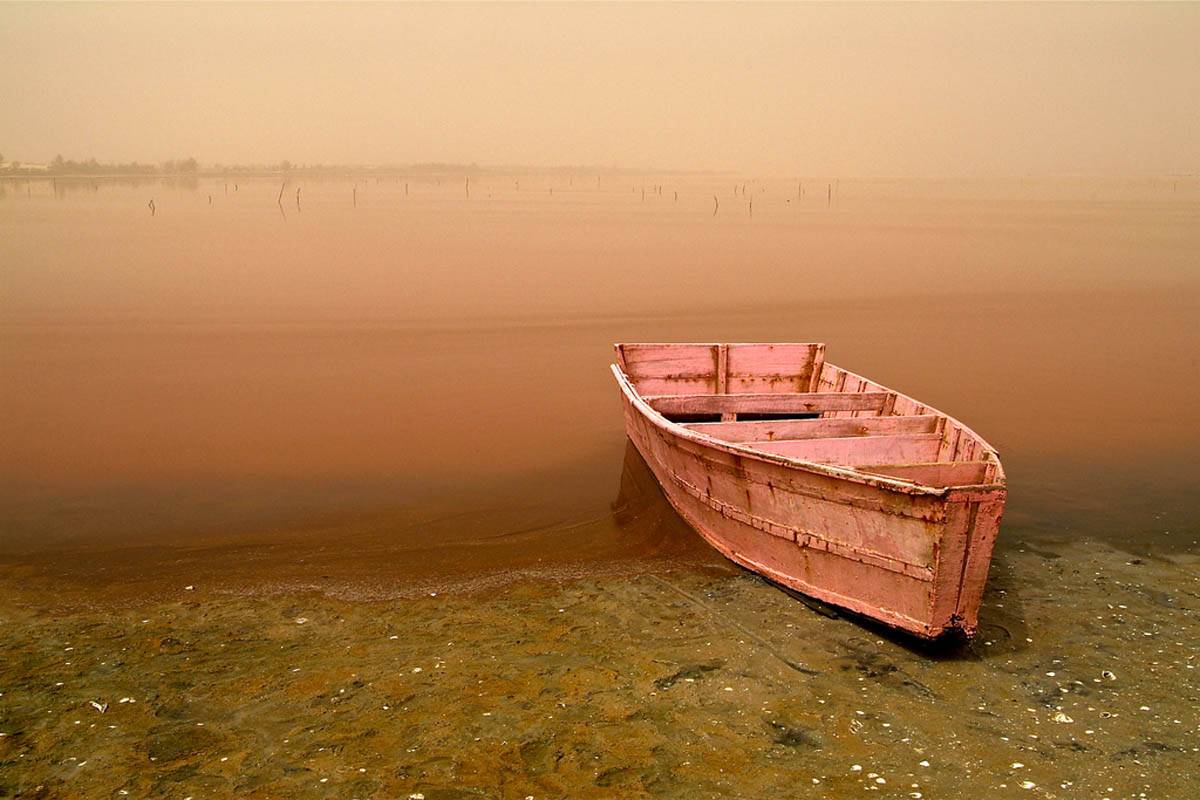