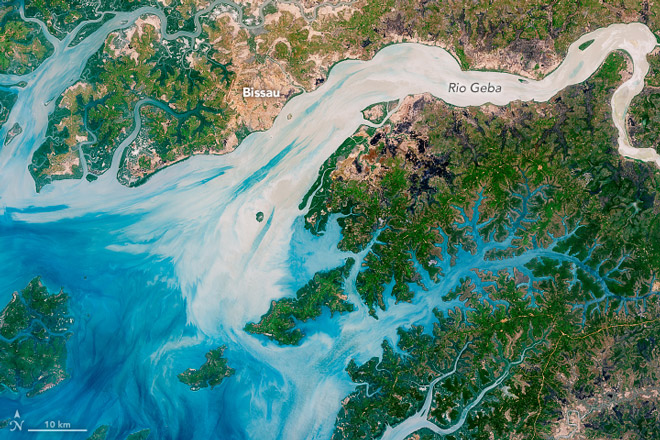 Estuaries off the coast of Guinea-Bissau branch like the roots of plants. Long “antennae” of rivers diverge across the plains of the country, in order to eventually fall into the Atlantic Ocean. On the way, they carry water, nutrients and various deposits.

This snapshot in natural colors was made on May 17, 2018 by an OLI instrument on the satellite Landsat 8. It demonstrates the movement of sediments as the rivers flow from east to west. The color change is most evident at the Rio-Geba River, which flows past the capital of the country.

The map below shows a more detailed look at how dissolved organic compounds in the water change its color, discoloring the river. Organic substances (leaves, bark, roots) contain pigments and chemicals that can stain water when dissolved in it. Depending on the amount of dissolved particles, the water on the images of natural color may appear blue, green, yellow or even brown as the concentration of organic compounds increases. In this visualization of the data it is represented in yellow, green and blue colors (blue indicates purer water). 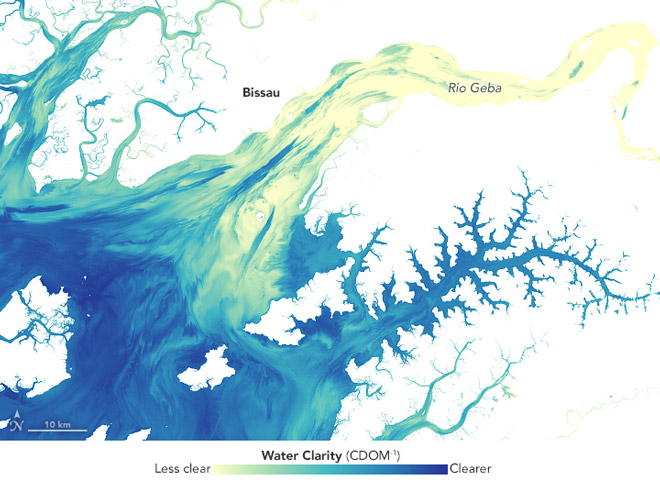 These estuaries play an important role in agriculture. Guinea-Bissau is a small West African country characterized by a flat relief with elevations only 20-30 meters above sea level. Coastal valleys are often flooded, especially in summer during the rainy season, which can lead to devastating consequences for infrastructure, agriculture and health. But with a moderate amount of rainfall, rain has a favorable effect on agriculture, especially positively affecting the cultivation of rice.

However, most of the agricultural land is created by the destruction of mangroves, which are a natural barrier between land and water. For example, a large rice production is located along the Rio-Geba River, which is surrounded by wide valleys and a plain in which forests have been cut down. As a result, coastal areas are eroded, which is expected to intensify as sea level rises. Several projects are currently aimed at restoring mangrove forests, followed by researchers.