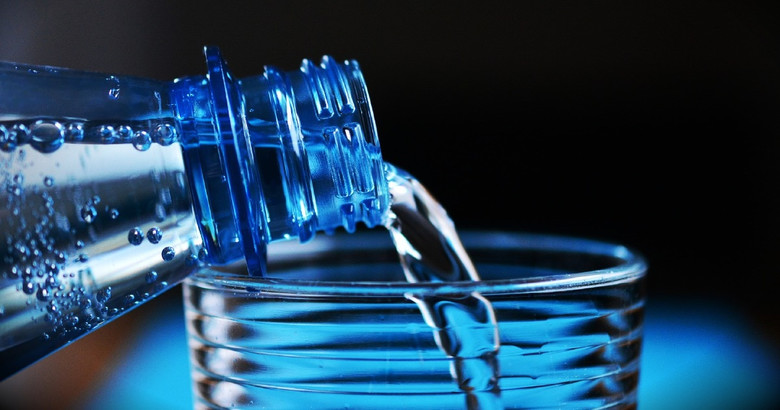 In the anti-Utopia film “Equilibrium” that appeared on the screens in 2002, a gloomy picture of the totalitarian future was shown, in which people living without emotions live. According to the plot, after the end of the third world war in the fictional state of Libry, the medicine “Prozium” was invented, which suppressed any emotions, both positive and negative. All the actors regularly took Prozium, not thinking about starting a war or rebelling against the authorities …

At first glance, the concept of mass acceptance by people of medicines, shown in the film – to force people to take drugs against their will, and even unnoticed – seems unworkable. However, in practice it is not difficult – just imperceptibly to mix them up in something without which a person can not exist for a long time. For example, in the water.

It is water, to be more precise, the addition of fluorine to it, which was the cause of one of the most famous scandals of the 20th century, disputes around which have not ceased so far.

And it all began with an open letter from the American chemist Charles Eliot Perkins on October 2, 1954, which he addressed to the Wisconsin Health Committee. Here is an excerpt from this letter:

“The real reason for fluoridation is not to protect the teeth of the population from caries. If this were true, then there are many other ways that are cheaper and more effective. The real goal is to suppress the emotions of the masses. Repeated infinitely small doses of fluoride day by day, slowly poisoning and narcotizing a certain area of ​​the brain, make a person submissive to the will of the authorities, which impose their own, self-beneficial opinion and vision of this world. This is an easy and not noticeable lobotomy. ”

In the same year, Perkins’s expository book, entitled “The Truth About Water Fluorination,” was published. The reason for writing the letter and the book itself was the information he received during his business trip to Germany.

Chemists of the German concern 1.6. Farben, in the territory of one of the plants which Perkins passed the refresher course, told him that their company during the Second World War supplied fluoride to concentration camps located in Germany and in the occupied territories. There he was added to drink to make the prisoners obedient, suppressing their will to resist.

The main message of the book was that the FDA, the US Food and Drug Administration, is adding fluoride to the water supply by the order of the government, just as it was done in fascist Germany.

The birth of a conspiracy

To be fair, it should be noted that fluoridation was not the invention of the Nazis. It began in the US and is associated with Dr. Frederick McKay, who in 1931 studied cases of fluorosis in one of the highlands of Colorado. This disease is characterized by pitting the teeth, the appearance of white streaks and spots on them. Of the 2,945 children examined by Dr. McKay, 87.5% of the patients had toothache.

At the same time, Harry Van Auddall Churchill, the chief chemist of the American aluminum corporation ALCOA, engaged in the research of new chemicals, conducted a series of experiments to study the effect of fluoride on the body. Most likely, he learned about the discoveries of Mackay from the newspaper periodicals of those years. It should be noted that ALCOA was directly interested in these studies, since fluoride is the main waste of aluminum production.

Experiments in rats have shown that caries decreased under the influence of fluoridated water. Churchill came to the conclusion that the cause of the epidemic of fluorosis in Colorado was a high concentration of fluoride ions in the region’s drinking water (ranging from 2 to 13.7 milligrams per liter).

The fact is that in the mountain formations of Colorado contains a mineral cryolite, one of the components of which is fluorine. As rain and snow fell, the wastewater dissolved fluoride, which then penetrated the water pipe. In regions with a low concentration, another disease, caries, was raging, and there was no fluorosis.

Other effects of this substance either were not studied, or were concealed. In 1947, ALCOA representative Oscar Ewing made a public appeal to the US Congress with a proposal to oblige US water companies to flotate their liquid stocks, and by 1951 (under the pretext of protecting citizens from caries), the company’s binding bill was passed, and such practice became apply throughout the United States. 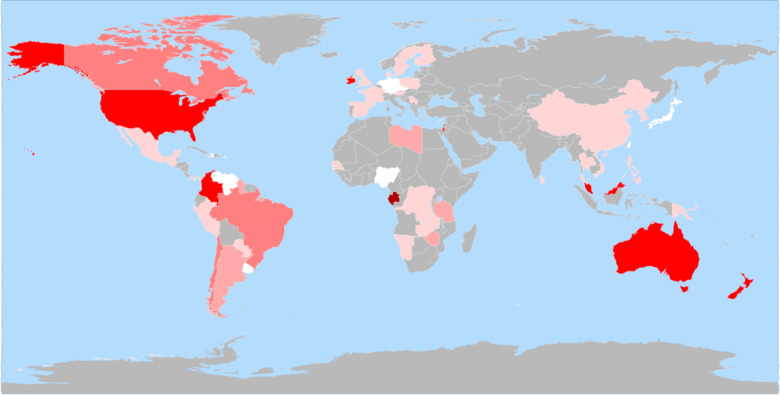 Level of fluoridation of water in different countries. The darkest color means 80-100%. In countries of gray color, water does not fluorinate

What is fluoride? It is a mineral that forms part of the soil. A small amount of it is contained in natural moisture. Despite this, it is a substance much more toxic than, for example, lead or iodine, and has no color and smell. He was able to poison bacteria, reducing their ability to eat, converting sugar into energy.

Such a dangerous property made him the main weapon in the fight against caries. However, it is dangerous not only for bacteria, but for other living organisms – a lethal dose for humans is only 2-5 grams.

Perkins wrote: “It should be noted that metallurgists around the world have never arranged strikes. Is it because their overfunded body is not capable of resistance? ”

Then prominent figures of American healthcare and most ordinary citizens of the country raised Perkins to laugh. And in vain. Only decades after the publication of his work, irrefutable evidence was found for the negative effect of fluoride on the human brain and other organs.

People do not kill beer

In 1990, scientist Jennifer Luke of the University of Surrey in the UK found that the area of ​​the human brain, known as the pineal gland, or epiphysis, is capable of accumulating the same amount of fluoride as the teeth. The epiphysis is called in the people by the third eye and the organ of intuition, and Leonardo da Vinci, for example, considered him to be the connecting link between the body and the soul.

And it’s no accident – it’s he who regulates sexual behavior and produces the hormones necessary to man: growth hormone, melatonin and serotonin. Growth hormone regulates the growth and development of internal organs, melatonin slows down the aging process and strengthens immunity, serotonin is responsible for attention, memory, intellectual abilities in general.

The level of serotonin also affects the sense of justice and trust – this is the conclusion of Molly Crocket from the University of California.

Over-saturation with fluoride leads to the fact that the epiphysis withers and ceases to produce hormones in the amount necessary to maintain normal vital activity. All this leads to sleep disturbance, learning ability, reduction of critical thinking and libido. Hence, passivity, inability to resist external stimuli and, finally, depression.

Experiments conducted by Harvard and Shanghai Medical Universities have shown that fluoride can cause a decrease in intelligence. The use of beverages containing fluorine in the ratio of a particle per million (the average dose in industrial fluorination), increases the absorption of aluminum in the brain, which eventually leads to changes similar to Alzheimer’s and other forms of dementia.

But a glut of fluoride reduces the function of not only the pineal, but also the thyroid gland. Steven Peckham, a professor at the Canadian School of Hygiene and Medicine at the University of Toronto, has established a link between fluoride and hypothyroidism, a disease that causes a decrease in the production of thyroid hormones. The body reacts to it with a set of excess weight, low pressure and increased fatigue. 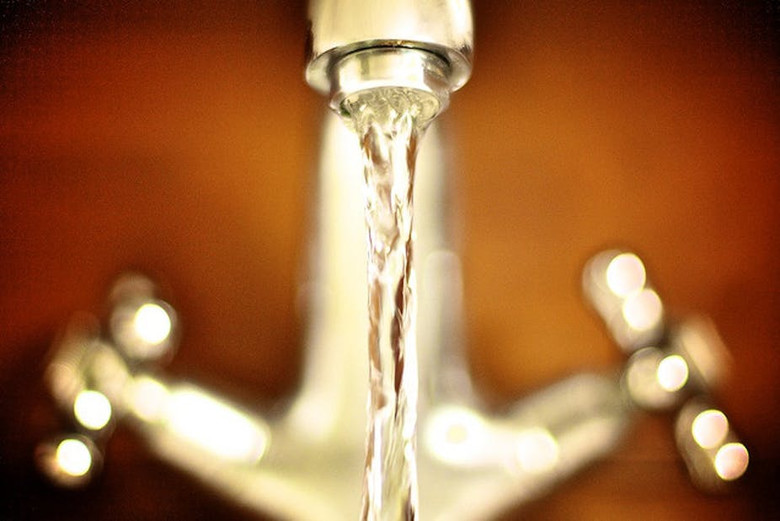 Truth is on the bottom

Currently, at least a billion people in 24 countries are getting artificially fluorinated water. These are mostly developed countries such as the United States, Australia, Canada, Ireland, Great Britain, characterized by low crime and high democracy. There it is consumed by at least 70% of the population.

In the US alone, 194 million Americans drink such water in 43 of the 47 largest cities, which is 70% of the population. It is also well known that Kellogg’s, Nestle, Crest and other food producers, nicknamed “Fluoride Mafia”, add fluoride to their products. These are toothpastes, carbonated drinks, chocolate bars, breakfast cereals and much more.

And pharmaceutical companies mix it with medications – such as, for example, the most sold in America antidepressant Prozac. All this is done with reference to studies half a century ago, which proved that fluoride protects teeth from tooth decay.

And according to the latest research, the benefits of fluoride proved to be controversial. About 10 years ago, the University of York in Scotland found that the number of cases of caries in children throughout Europe declined. Countries that show the greatest decline – Sweden, the Netherlands, Finland and Denmark – have abolished mandatory fluoridation of water.

It should be noted that in Russia water does not fluorinate, but chlorinate, but it was not always so. For the first time in Europe, chlorine was added to the water pipeline in England in 1890 during the cholera epidemic. In 1908, this practice began to be applied in Russia. However, during the period from 1960 to 1990, for unclear reasons, chlorine was replaced with fluorine, and then chlorine was returned back.

Despite the fact that chlorine is also a poison and has a chemical formula similar to fluorine, its effect on the brain, unlike the influence of fluorine, has not yet been studied thoroughly.

The question of whether the public tranquility of the suppressed will of the individuals making up this society, given by the hero of the film mentioned at the beginning of the article, remains open.