Deadly battle of rhinoceros and hippopotamus 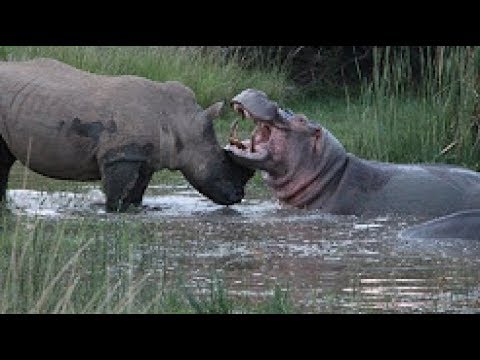 A delightful video shows how an angry behemoth drowned an unsuspecting rhino. The latter simply defended the pit with water, which he occupied during an unbearable drought in a hunting reserve in South Africa.

Caretaker Stanley Robertson, who photographed an incredible battle, accompanied the tourists when he noticed a rhino that descended to the water in the hope of quenching thirst.

But since the water in the Kara area is in short supply, the furious behemoth was clearly not happy that he would have to share the water with the uninvited guest. The rhinoceros was surprised when the hippopotamus roared loudly, and then left the pond and attacked him. The rhinoceros – the second largest terrestrial mammal – would be a favorite in the fight with the hippopotamus, if not for one but. The horn of a rhinoceros was removed to protect it from poachers. Unable to bite off the horn, the rhino was forced to give way, and the hippopotamus dragged him into the water and turned him on his back. Even when the enemy retreated, the rhinoceros could not rise from the viscous mud and drowned.

Ranger Robertson explains: “The hippopotamus defended his territory and wanted to make sure that no one else would climb to him. Hippos become extremely aggressive during a drought. When the hippopotamus pushed a rhinoceros into the water, adrenaline took over, and then there was a complete shock mixed with unbelief. It was difficult to watch and not interfere, but it’s nature. It’s a very, very rare sight, really. We stood still and watched the hippopotamus drown the rhinoceros. ”

Behemoth, the third largest terrestrial mammal, is one of the most dangerous animals in Africa. Hippos kill 500 people a year.