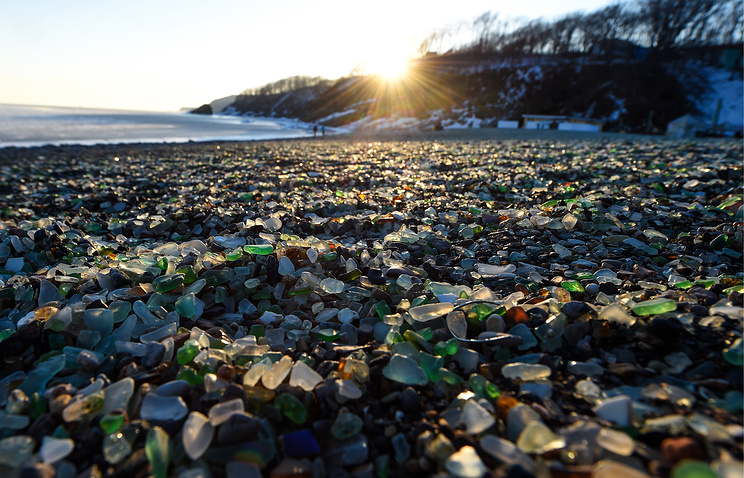 A group of scientists from the Far Eastern Federal University (FEFU) has established that the bay may disappear in about 20 years – in one generation. Hundreds of thousands of fragments of multi-colored glass will turn into ordinary sand, and the bay will fill with gravel and pebbles. To find the answer to the question of how many years the bay will remain unchanged and what phenomena occur to it, more than 500 fragments of glass were studied.

It’s very easy to see Glass: only 20 minutes by car from the nearest microdistrict of Vladivostok. The road runs along the shore of Ussuri Bay, circling dozens of small coves, reliably shielded from the wind by high rocky capes. Now these coves have become a favorite vacation spot, but six years ago they were avoided because of the suffocating smoke and mountains of garbage brought from the huge city dump that was located right on the beach.

But it was this dump that became the progenitor of the tourist attraction, to look at which come today from all over the country. For decades, not only paper and plastic rubbish were brought to the dump, but tens of tons of broken and whole bottles, glassware and ceramics were also brought to the dump. Over time, they landed in the sea, where nature undertook to work, crushing the debris and smoothing out sharp corners, and then throwing them on the beaches.

“The broken pieces of glass on the beach, along which the bay got its name, were formed because of bottles that were wholly or brokenly delivered by waves and currents to the bay from a nearby landfill,” says Doctor of Geographical Sciences, Professor of the Department of Geography and Sustainable Development of Geosystems FEFU Peter Brovko.

Pieces of glass are strewn with beaches in all the bays near the former dump, but in Glass they are hundreds of thousands. And here again nature has again interfered: in the summer-autumn period in the Ussuriysky gulf the south-east winds prevail, which determine the movement of water in the coastal zone. Therefore, everything that bears the sea, is thrown to the shore of small bays. And if they are well protected from the east by high and steep capes, then brought by the sea for a long time remains on the beach. It is precisely these conditions that Glassy is fully responsible for. 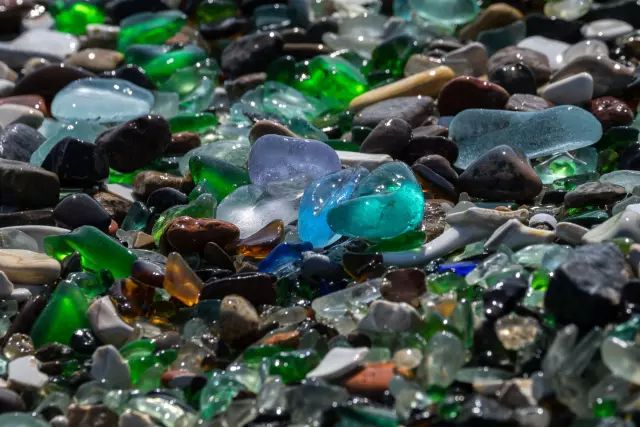 Dozens of years of the wave threw splinters of glass on the beach of the bay, polishing and smoothing them. Today, the whole coastal strip 5-10 meters wide is covered with a glass “pebble” 2-5 cm in size of the most diverse color. Most often, green and white fragments come across, but if you look good, you can find bright red, saturated burgundy, sky-blue or azure. And on a sunny day and in splashes of waves the beach flashes with green, red and white lights, which attracts thousands of tourists every year.

It did not take long to admire

However, to admire this miracle remained not so long. Without the constant arrival of a new glass, a colorful beach can disappear during the lifetime of one generation. This conclusion was made by the specialists of the Department of Geography and Sustainable Development of Geosystems of the FEFU, which on March 27, specially for the TASS, conducted research in the Glass. They not only inspected the bay and estimated its ecological state, but they took and studied on the spot about 500 samples of glass fragments and sand.

The broken pieces of glass on the beach, over which the bay got its name, were formed from bottles that were wholly or brokenly delivered by waves and currents to the bay from a nearby dump

Peter Brovko
Doctor of Geographical Sciences, Professor of the Department of Geography and Sustainable Development of Geosystems FEFU

“It is already clear that the proportion of glass in the beach sediments is lower than it was before – I can compare it with the observations of twenty years ago,” says Peter Brovko.

According to scientists, the outlook for Glass is pessimistic.

“As for the forecasts, it is obvious that there will be enough glass for one generation, and then there will appear an ordinary sand-gravel-pebble bay, which is much in Primorye. Now there is a natural loss of glass due to abrasion, as well as a massive take-out for souvenirs that no one In addition, the bay experiences an incredible “stress” in the summer from the influx of holidaymakers, which, together with the unobtrusive service of the average posh, does not allow us to see bright prospects, “the scientists believe.

Already, a layer of glass “pebbles” on the shore does not exceed 10-15 cm, and under it is sand mixed with glass fragments no larger than 1 cm. 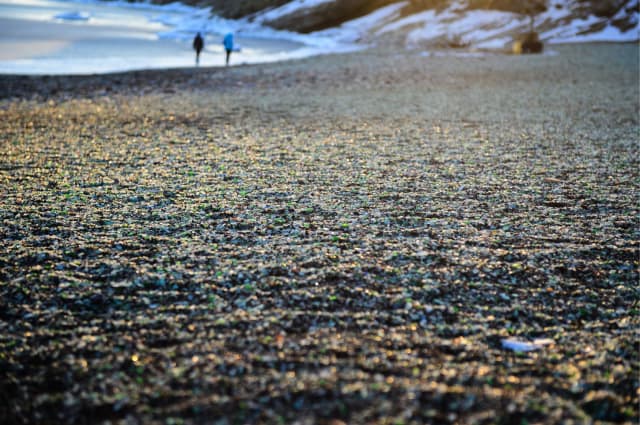 “According to the theory and practice of coastal science, as a result of the wave action, the fragments are distributed in size and weight: from the larger ones in the upper part of the beach to the smaller ones closer to the water and further to the depth.The glass fragments behave in the same way as the natural material,” – Scientists emphasize.

Not only is nature to blame for the destruction of the Glass, thousands of tourists try to grab souvenirs for memory, choosing the rarest in color and shape fragments of not only glass, but ceramics. Many take not one or two, but dozens, to use them in home design. Come here and individual entrepreneurs, collecting free glass for the production of souvenirs and jewelry.

The Glass Bay has recently been included in the list of facilities that the regional Tourist Information Center recommends visiting the guests of Primorye. Although here, too, the danger that mass tourism can represent for ecology and preserve the glass “wealth” of a small bay is understood here. “The place is stunningly beautiful, framed by rocks, and the glass resembles a volcanic rock.” We include it in the list of places that we recommend for tourists to visit, but the bay is suitable for individual family rest and making it a place of mass influx of tourists is not entirely reasonable. From the main sightseeing routes and display facilities, which makes it inconvenient for inclusion in large tours, “- said the director of the Tourist Information Center of the Primorsky Territory Daria Guseva.

While Glass is a favorite vacation spot for single tourists who like to visit it at any time of the year. Even in winter, you can meet people who enjoy a bright shine in the sun frozen in the ice glass.

According to the theory and practice of coastal science, as a result of wave action, fragments are distributed in size and weight: from larger ones in the upper part of the beach to smaller ones closer to water and further to depth. The wreckage of the glass behaves exactly the same as the natural material

Peter Brovko
Doctor of Geographical Sciences, Professor of the Department of Geography and Sustainable Development of Geosystems FEFU

“The bay is popular not only among the local population, but also among the guests of the region.It is more individual tourists who want to visit a place that has gained wide popularity due to mass publications in social networks and generally interesting history of its formation. From the US and Europe.In the States, by the way, there is a beach with the same name in California in Fort Bragg, but our bay is more interesting because the glass on the shore is colorful, that is, it is more phenomenal, “notes Guseva.

Today, for the residents of the city, Glass Bay has become not just a beautiful and unusual place for rest, but a symbol of the victory of nature over the irresponsibility and indifference of people who for decades dumped waste in the sea. Waves and wind were able to cope with the effects of pollution, turning glass debris into a safe and beautiful beach, teaching people a lesson of respect for the environment. “The sea is trying to cope with the wounds inflicted on it, but a man that” sounds proudly “should live in harmony with the environment,” Peter Brovko summed up the research by the FEFU glass scientists.