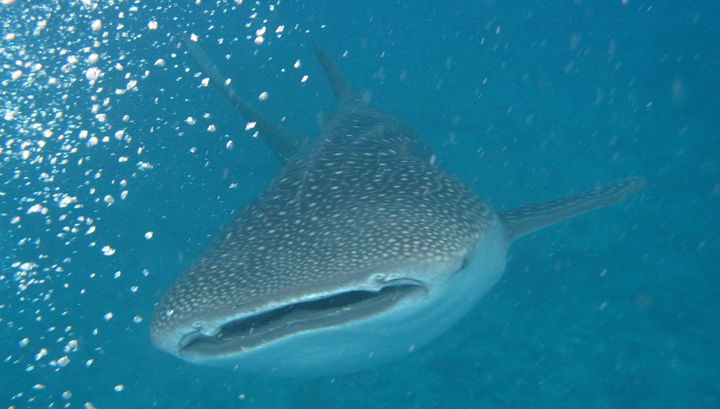 Suffering Galeophobia – fear of sharks – a tourist from Norway almost found himself in the mouth of the largest of the existing fish during diving in the Philippines. He made his adventure on video.

“All my life I was very afraid of sharks and open water, even when I lived in Australia, I was not surfing, basically keeping in shallow water,” admitted 49-year-old Geir Johansen from Trondheim.


According to him, before diving, they were warned about a possible encounter with whale sharks, especially noting that it is absolutely safe, because the largest on the planet fish feed on plankton.

“When I saw a huge shark, I almost had a heart attack.” I tried to keep myself in hand and keep calm so as not to irritate them.In the shark’s look I read “Stay away from my food” and then she pushed me twice “, – said the tourist.

On the shots you can see how the diver literally draws to the jaws of the whale shark, which in search of plankton sucked hundreds of liters of water. In the end, Geir was able to sail away from the giant for some distance, but before he could feel the touch of hard, like steel, graze.

“It was an amazing experience!” – ascertained the beginning diver.

The coast of Oslo on Cebu attracts many tourists the opportunity to swim in the company of whale sharks, whose body length can reach 18 and even 20 meters.