Diver and Asian sheep goose have been friends for 25 years 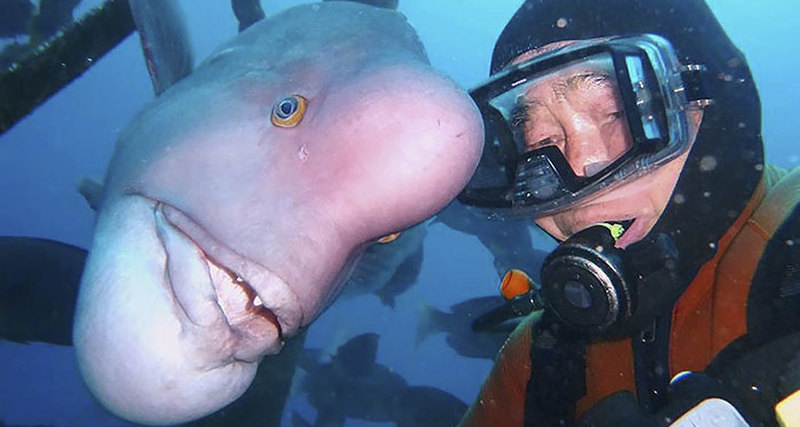 Recently, researchers found that fish can “recognize” a person in person. And this is the real confirmation: a Japanese diver and a wild fish named Yoriko are friends for 25 years.

Diver Hiroyuki Arakawa is 79 years old. For 60 years he is fond of snorkeling. Once he (with the help of his colleagues) even built a thorium at the depth of 17 meters – the gate of the Shinto temple. Since then, he has been looking after them, like the abbot of the temple.

According to the Japanese, in 30 years he saw a lot of amazing sea creatures and even made friends with one of them – the fish of the species Asian sheep-headed goose.

The diver found a fish near the gate of the temple. She was exhausted and could not even feed herself. Then Hiroyuki Arakawa decided to help her: for 10 days he fed her crabs. Surprisingly, when the fish got better, she did not sail away, but settled near the gate. The Japanese gave his new friend the nickname Yoriko.

“If you look closely, you will notice that it has a human face,” Arakawa said. “I think she understands that I saved her once.”

The Asian sheep-headed gaban lives in rocky reefs around the Japanese islands, the Korean Peninsula and the South China Sea. Many fish seem unattractive, so among the divers she received the nickname “Shrek”.

By the way, more recently, researchers have found that fish can “recognize” a person in person. Researchers from Oxford University showed the animals photos of two people and taught them to choose a specific picture, letting a jet of water on it. The fish coped with the task, and after that, the biologists complicated the task: with the help of a photoshop they aligned the shapes of people’s heads in photos, and the images themselves were taken in black and white. But even this did not embarrass the marine inhabitants: with an accuracy of 86% they guessed the person they needed.