Fish walking on the seabed 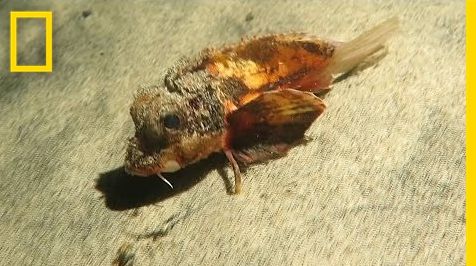 A diver in Bali in Indonesia met a rare animal walking along the seabed at night. And, to the surprise of Emeric Benhalassa, it was a fish!

According to the diver, a representative of the Scorpion family was walking on two legs, one of the most poisonous fishes on Earth. Scientists agreed that the strange creature belongs to the subfamily of warty-eyed animals. “They have poisonous glands at the base and dorsal fins, and when their thorns pierce the human skin, poison is injected into the wound,” says Jeff Williams of the National Museum of Natural History at the Smithsonian Institution (USA).

Of course, in fact, there are no legs in Scorpion. The fact is that parts of the pectoral fins of the fish are divided in the course of evolution. According to Hiroyuki Motomura, a biologist at the Museum of Kagoshima University (Japan), scorpion and their relatives use pectoral fins to study silt for worms and crustaceans.

Williams believes that the particular one that the diver observed refers to the species Minous trachycephalus – striped minuses. Ichthyologist V. Leo Smith of the Biodiversity Institute at Kansas University (USA) believes that the fish belongs to the species Minous pictus, so the tail is pale, and not covered with dark and light strips, like in Minous trachycephalus. And Stewart Posse of the California Academy of Sciences does not rule out that it could have been Minous quincarinatus or a white-tailed minus. But Motomura is sure that the diver managed to see the fish of a new species unknown to science.
Scorpion people spend most of their life submerged in mud, and therefore they are rarely seen by divers. They are often pulled out by fishermen catching shrimp. Some of them even find themselves on the plates of Japanese gourmets. But in other countries of Southeast Asia these fish are simply thrown back into the sea, as they are considered devils.

Because of the rarity of fish, any video with them is of great value. A “walk” scorpionovyh and was filmed for the first time.