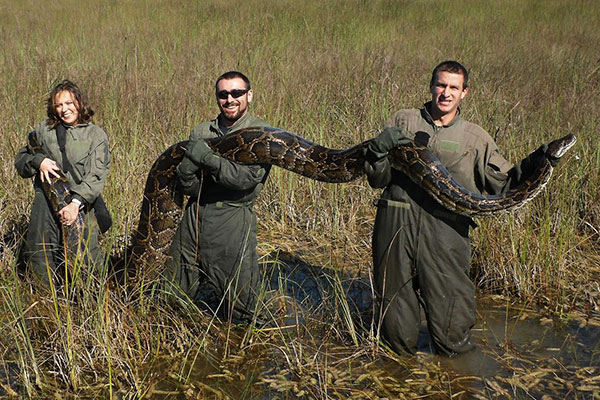 Florida captured the giant pythons, growing up to five metres and can swallow an adult alligator. They came to the Peninsula from another continent and for years bred in the depths of forests and swamps. Reptiles were now declared themselves, and nobody knows how to stop their invasion. The American hunters and scientists were powerless. All hope for hereditary Solovov from India. “Ribbon.ru” has studied this history, which is more like a script for Hollywood horror, but actually still real.

Python on a nuclear basis

Dark-skinned guests from India stopped, squatted down and lit cigarettes bidis. Other members of the expedition could only wait. Two hunters from people irula arrived in the United States in early January at the invitation of the University of Florida. Since then they have wandered through the swamps, accompanied by interpreters, biologists and a couple of Labradors.

At home on hunters irula legendary. Many generations ago, they destroyed almost all the Boas, which lived in the South of India, and went on Cobra: the venom is extracted for the manufacture of antidotes. In Florida they had to hunt for dark tiger pythons. Irula never experienced this, but know how to hunt down the reptiles. This is a very rare skill, and the American hunters its definitely not.

In the Everglades the Indian zmeelov immediately plunged into the thicket and soon found traces of a few large individuals. At the same time, however, luck has ended. The men made their way through the thickets for a few hours, but have not met one Python and decided to take a break. Smoked bidis, irola began the song. The translator explained to scientists that they remade an ancient spell: added a word about the pythons and Florida.

After a stop, the group headed to an abandoned base defense. In the midst of the cold war, there was a deployed missile “Nike-Hercules” with nuclear warheads. In 1979 the base was closed, and since then it is empty. Near a squat concrete bunkers of the Indian guests had noticed a suspicious traces. “Malai pambou!” — said one of them. The interpreter turned to the biologists and said that there’s a giant snake.

Inula crept to one of the missile silos and began to clear the roots of the wild Fig tree, covering it from the inside. In the empty box for the cables could be seen the belly of the reptile. Men rushed to the other end of the box, so as not to give the snake to leave, and found her tail. Seelowe went to work and pulled out a five-meter female tiger Python. It was followed by a three-meter individual and a couple of pythons with a length of 2.5 meters. 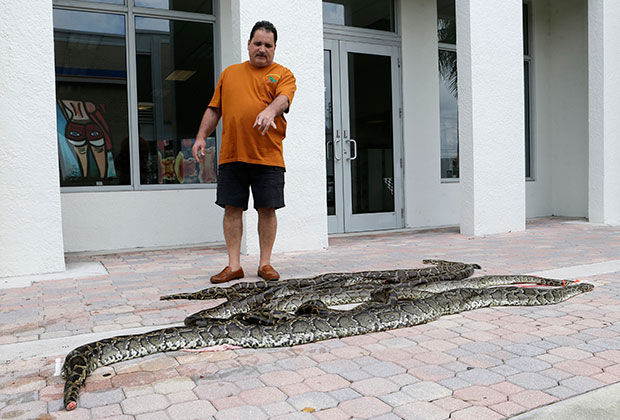 The birthplace of the dark tiger Python is not America, and Southeast Asia. They are found in Myanmar, Nepal, Vietnam, Cambodia, Thailand and Malaysia, are found in Eastern India and southern China. Florida has appeared in this list recently, and experts are still arguing about how it happened. One thing is clear: blame the fans of exotic animals.

In the early nineties to keep tiger Python at home has become fashionable. Young individuals seem to be absolutely harmless, besides they are safer other large reptiles, and to feed them is not too difficult. Towerhouse imported into Miami thousands of pythons and gave them for mere pennies. One time newborn snakes can be purchased for 20-30 dollars.

Customers rarely wonder what will happen to their Pets on. And then they begin to grow. The normal length of the dark tiger Python is 3.7 meters, and this is not the limit. Five-meter individuals — is not uncommon, and the largest specimen of this species shot up to 5.7 meters. It is not excluded that somewhere in the tropical swamps lurk pythons and authenticity, but proof of this.

Grown Python is difficult to call harmless. His jaw in several rows to cover sharp curved teeth. Reptile death grip bites into the prey, bows his whole body and begins to squeeze. Even a small tiger Python can inflict dangerous wounds, and the adult individuals are able to completely swallow the leopard. With a man they can handle easily.

Experts from environmental organizations of Florida received reports seen in the wild, the pythons almost every day. Some reptiles had escaped from pet stores, others missed the breeders and careless owners. Often the owners themselves dumped on the street when I realized that the pet they got.

To top all of Florida was struck by a powerful hurricane “Andrew”. From the destroyed zoos and research centers ran about 15 thousand wild beasts. Many animals caught, died (someone put the word out that walking around the streets of macaques infected with HIV, and the locals have shot them yourself), but some have disappeared without a trace. The hurricane has left no stone unturned in the warehouse of the trader of reptiles in the heart of the Everglades, which contained hundreds of tiger pythons. Where did they go nobody knows.

Experts suspect that some of them survived and managed to crawl into the swamps and hid.

Life will find a way

Biologist Skip snow, working in the Everglades national Park, suspected that there is something wrong. In 1995 he met in the depths of the forest not one, but several tiger pythons. They were not similar to another of fugitives from the pet store. Ones, as a rule, were older, and he had very young individuals. In addition, where they come from in this wilderness. Got into the wild pythons rarely crawl far away from their former owners.

Snow told coworkers about his doubts, but no one listened. “I said I never found their nests. And not much seen,” he recalls. He continued the search, but the next couple of pythons were spotted in the Everglades in 2000 and later. However, after that, they began to see more and more often, but it is not convinced the Park administration.

According to snow, his opponents were a thousand explanations why worry about the pythons pointless. Someone told him that he needed to wait for the cold weather, and the problem will solve itself. Heat-loving reptiles will not survive frost and will die. Another expert suggested that the pythons will not survive in Florida. Even if they lay eggs, they’ll eat fire ants, which are in abundance here.

The turning point came in 2003. A group of tourists noticed that in shallow water near the entrance to the Park something happens. They came closer and saw a big alligator to death, grappled with the heavy tiger Python. The snake tried to strangle predator, he never gave up and clenched her jaw.

The fight lasted almost a day and ended in a draw: tired alligator loosened its grip, and the Python escaped into the swamp to heal the wounds. By the time the photos and videos spread around the Internet. About the Everglades pythons are found all over the world. 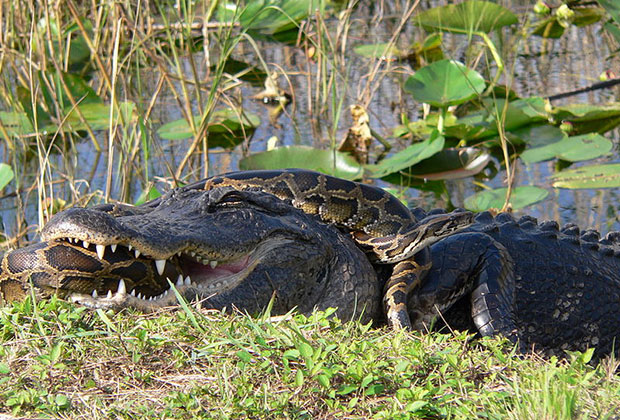 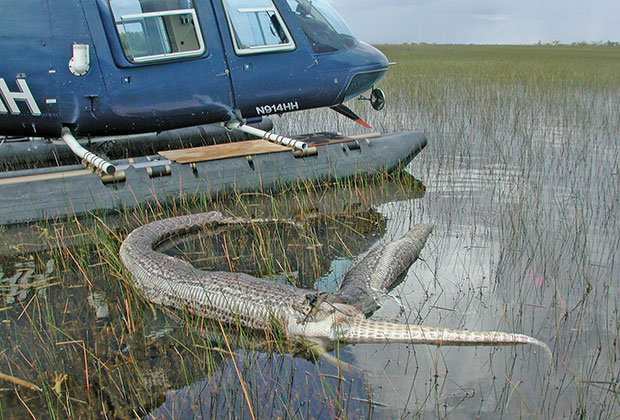 The Python tried to swallow an alligator, but he managed to break through the belly and escape

Invasion of the giant reptiles

After the scandal the management of the national Park immediately remembered about annoying employee, who for many years warned about the appearance in the Park Asian reptiles. Snow was summoned and instructed to deal with the problem.

The biologist went deep into the Park and began to find out what is happening there. A few months later he found a tiny Petnikov, which recently hatched from eggs, irrefutable proof that have settled in the Everglades, pythons reproduce.

Snow brought one of the baby snakes at a meeting of the agencies for the environmental protection of Florida. The experts took one look in order to understand what it means. “Just a week ago, Python is generally not considered a problem, — says the biologist. — After the meeting began to think that we can only give up.”

Sam snow give up was not planned. He continued to travel around the Everglades in his battered SUV, search for Python and provide them with the RFID. To defeat the enemy, you need to know all about it, and then the scientists have nothing to brag about: the habits of the dark tiger Python is very poorly known.

By 2005 in Florida has caught more than two thousand individuals, including Python length is 533 cm (this record will not be broken until 2012, when scientists caught a giant female length 536 centimeters, which was prepared to postpone 87 eggs). The fire ants turned them uneasy, and not only them: in the Everglades was not a single predator, able to cope with the pythons of Asia.

But they did not disdain anything. Caught in the belly of reptiles found in almost all Florida animals without exception. Snow told reporters that he personally extracted from the remains of pythons, mice, rats, rabbits, muskrats, raccoons, squirrels, bobcats, opossums, otters, deer, ducks, herons, birds-grebes and — in one particularly tragic case, a cat named Francis.

Overseas reptiles almost completely exterminated raccoons, opossums and bobcats. Other mammals in the eyes becomes less, and particularly affects those areas where snakes most. Scientists are surprised that so far not hurt any one person. It is a rare luck, and it can’t last forever. 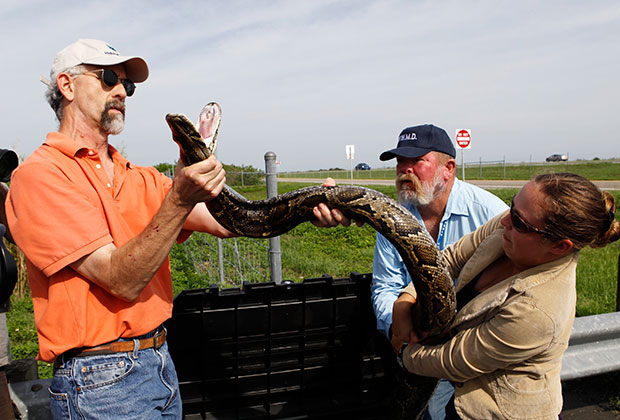 For 15 years experts have tested many methods of dealing with pythons. They tried to hunt with dogs, they set traps, even tried to put decoy females with RFID in the hope that they will come crawling males from all around. It turned out that the reptile doesn’t anything. They continue to grow and multiply with astonishing speed.

In 2007, it was believed that in the Everglades there are no more than 5 thousand dark tiger pythons. By 2015, their number, according to the us national Park Service, has grown to 100 thousand. Scientists believe that in the foreseeable future, this species may occupy all of Florida, and then to launch an attack on other States.

Professor of ecology Frank Mazzotti from the University of Florida proposed to approach the issue from the other side. If the experts don’t know how to defeat the giant reptiles, why not bring to this task of Amateurs? Worse, it will not be, and nobody knows if someone will be lucky.

The scientist knocked out, the authorities, funding, and in 2013, declared the Everglades Python Challenge — the first public competition in the hunt for pythons. The man who kills the maximum number of snakes, promised a reward of 1.5 thousand dollars. For catching the longest Python was supposed consolation prize — one thousand dollars.

South Florida was attended by about a thousand hunters from all over America. Each received a booklet describing the best methods of killing reptiles, where was advice or shoot the brain out of the fire or pneumatic weapon, or to cut the head with a machete, and a warning that to beat the Python with a club — not very effective.

The tips did not help: for the month would-be hunters killed only 28 pythons. Last year the event was repeated. The result was better, but still not impressed: 102 individuals per 1060 participants. After that, Masotti decided to find catchers who know how to kill the snakes without a special brochure, and brought in the Everglades of Solovov from India.

For the first month the work of two hunter inula caught 14 pythons. “We calculate the efficiency of different methods in Python for the dollar and the pythons in an hour,” says biologist ed Metzger who’s working with Mazzotti at the University of Florida. Most expensive decoy snakes: 11 thousand dollars for each caught species. American hunter-volunteers cost 177 dollars per Python, but terribly inefficient. Reptiles, produced by the Indian smelovaka, more expensive — almost five thousand dollars apiece — but that does not matter: scientists hope to learn from their tactics and to teach her compatriots.