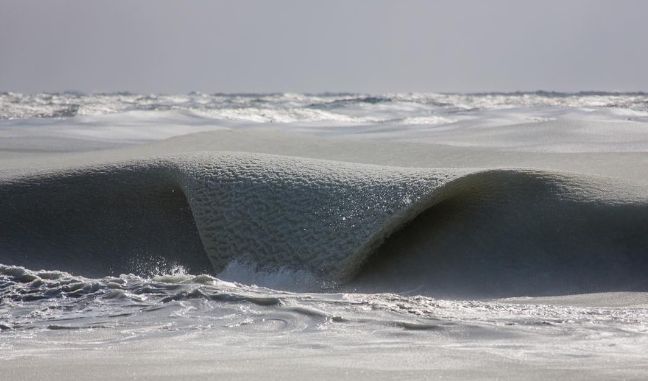 American photographer and surfer Jonathan Nimmerfroh in February last year witnessed a unique natural phenomenon: ocean waves off the coast of the island of Nantucket (Massachusetts) has become frozen, but also not static mass, as if someone stirred their gigantic spoon like ice cream.

Amazing pictures attracted the attention of the Internet audience over a year, is rapidly spreading over all social media.

“When I came to the beach, we noticed on the horizon a strange thing: the waves crashing against the shore on a summer day, moved slowly and completely silently. There was a feeling that I have earplugs in my ears, — said Jonathan. — Coming closer, I realized that they froze, but not completely.”

As a rule, water freezes at 0 °C. However, the salt in the ocean lowers the freezing point to about -2 °C.

That day on the island was -12 °C, according to the National weather service. If the temperature is the only factor, these waves may be more common in nature. But local fishermen said later that he never even saw. Glaciologist Helen Fricker from the SCRIPPS institution of Oceanography in California, was also surprised and are unable to provide a full scientific explanation, adding that the phenomenon outside its competence.

Probably due to the movement of the waves, the ice crystals have dissolved before you turn into a complete layer, covering this shallow area of the Atlantic ocean. As a result, the water consistency has turned into soft ice cream.

According to the photographer, it was truly a fascinating spectacle. Most of the waves reached nearly two feet, particularly large rose to three. The next day Jonathan went back to the beach hoping to see them again, but the ocean was frozen into immobility, tightly bound ice layer.