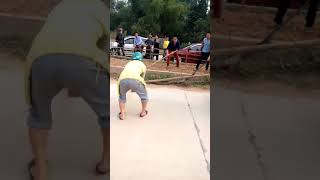 In the Vietnamese province of Fuhto, a giant cobra blocked the way for motorists. The video of the incident was published on YouTube channel ViralHog.

The clip shows that several cars stopped because the snake was on the roadway. First, the drivers tried to move the reptile, pulling it by the tail. Then several men with the help of sticks gradually began to move the cobra along the ground. As a result, they took the snake in their hands and removed from the road.

Channel subscribers suggested that motorists use cobra for food, since snake dishes are quite common in Vietnam.

“And now they will make of her a snake soup or snake whiskey,” one of the users wrote.