GMOs will save us from starvation or ruin? 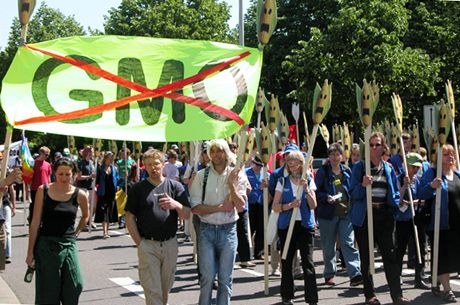 We are what we eat. This applies to all products, including for genetically modified organisms (GMOs). The more we consume GMOs, the higher the risk of transgenic contamination.

It is believed that all the food that enters our body is segmented to blocks from which the body of his program builds itself. Why GMOs can never harm. However, some scientists believe that it is real.

Modified DNA from GMO can also be a part of our genetic material due to the phenomenon called horizontal transfer of genes (horizontal gene transfer).

When a child is born, his body consists of cells grown from the zygote during fertilization. The body of a newborn receives a construction material through the mother’s placenta and gradually grows.
During the life of the cells of our bodies are built from what we eat. Therefore, all that is our body derived from the food that we ate.

Traditionally, the organisms get DNA from their ancestors, which is called vertical gene transfer. Horizontal gene transfer is the transfer of genetic material to another organism that is not its descendant and is not associated with reproduction.

Proponents of GMOs claim that horizontal gene transfer does not play, his influence is very rare. It is believed that this phenomenon is possible only in laboratory conditions.

According to EarthOpenSource, there are several options by which horizontal gene transfer becomes a reality. Some of them are more probable and occur with ease everywhere. For example, the uptake of genes by bacteria, uptake of DNA from the digestive tract into the organism and gene transfer by viruses.

Bacteria are constantly exchanging DNA between themselves and the environment. Some of the acquired genes may be included in their genome and cause changes. For example, in the human gut DNA transgenes can persist in large fragments and not to lose biological activity.

Bacteria present in the digestive tract, can turn it into its own DNA. It may cause the development of antibiotic resistance.

Also altered DNA may become part of the genome of soil bacteria. Each cubic centimetre of soil contains thousands of different species of bacteria, only a small percentage of which are known to science.

Some of the known soil bacteria can incorporate DNA that is present in the soil, in its genome. Although this is rare, genetically-modified DNA can persist in soil for up to a year, which increases the chances of the transgene.

The studies also proved that A. Tumefaciens can contaminate a variety of plants and mushrooms, as well as human cells in the laboratory. The contamination of some conifers persists for years. And the use of antibiotics is ineffective and eventually leads to multiplication of A. Tumefaciens.

Some 10 years ago, we had no idea about smartphones. More than a century ago people could not even think that will ever fly into space, learn about antibiotics, penetrate int…

Absorption genes in the intestine

Studies in mice have proven that the foreign DNA present in food can travel from the digestive tract into the blood. Of course, a large part of the foreign DNA is fragmented before reaching the blood or tissues. However, several large chains can also be transported and get into the cells.

Integrated DNA causes mutations or preprogrammed cells for the production of a foreign protein, like viruses. However, such a scenario is unlikely. Although scientists were able to detect transgenic DNA in tissues using GMOs to prove this mechanism does not work.
As they say, that life did not seem gray, you should be able to divide black and white. If we talk in detail about the benefits of healthy, organic products, why not talk to…

Viruses are an efficient means of transferring genes from one organism to another. Scientists often use this for research purposes. For example, the so-called “viral vectors” are used to create GM crops. However, for a long time, genetic material can enter and spread in the environment.

Given the extremely wide distribution of GM crops and their long-term use, horizontal gene transfer could become quite commonplace and to degrade the genomes of plants, animals and humans.