Humpback whale stuck in the harbor of Ventura 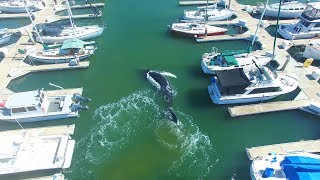 On Saturday, May 20, a young humpback whale was stuck in the harbor of Ventura in the USA. An animal no less than 10 meters long swam into the harbor and could not find an outlet back to the ocean. The whale crashed several times in the ship, standing in the docks, and then nearly knocked down the screws of one of the boats.

Captain Port Ventura John Higgins, along with Coast Guard officers and volunteers decided to release the animal. They tried to rescue the whale for more than 4 hours. Security guards used a hydrophone, which reproduced the sounds typical for whales. Thus, the animal wanted to be lured out of the “trap”. However, the method did not work.

“It was heartbreaking – we saw the animal in trouble, but could not help it in any way,” said John Higgins.

The device that reproduced the sounds of whales, decided to leave near the entrance to the harbor for the whole night. In the morning, when the rescuers’ team was to resume the operation to free the whale, the animal was no more. Probably, the sounds of the hydrophone nevertheless helped him to swim out of the harbor and find an outlet to the ocean.