Hundreds of rivers appeared in Antarctica 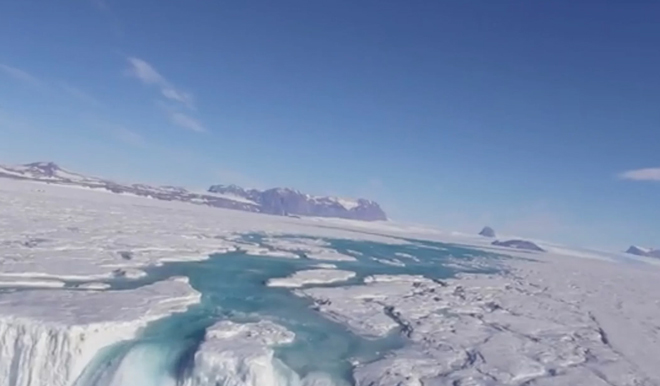 When the summer comes in the Southern Hemisphere (the period from December to February), hundreds of rivers and streams of meltwater appear in Antarctica. This is evidenced by the results of a new cartographic study of continental Antarctica conducted by scientists from Columbia University (USA).

Scientists have long been aware of the abnormally high rate of melting glaciers of the Antarctic Peninsula in the northwestern part of Antarctica, but a large-scale study of glaciers throughout the continent was completed only now. The researchers analyzed satellite images, as well as aerial photographs of the Antarctic, made between 1947 and 1973. The results of the analysis were unexpected and alarming.

Previously it was believed that, in addition to the Antarctic Peninsula, most of the glaciers of the continent melt relatively slowly. The scientists predicted a more large-scale melting of ice in the future. “Most experts believed that the cases when water flows flow through the territory of Antarctica are extremely rare,” said glaciologist Jonathan Kingslake, lead author of the study. “Now we understand that this is a frequent and large-scale phenomenon.”

Today, the most active melting of ice occurs on the periphery of Antarctica, on ice shelves. According to the forecasts of specialists, the melting of the continental shelf ice shelves in the future will lead to a faster melting of glaciers throughout the continent and an increase in the level of the World Ocean.