Hunting cancer on a bird caught on video 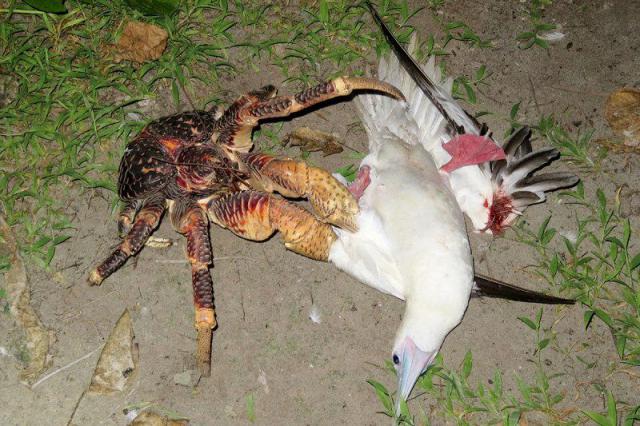 Scientists for the first time managed to observe how a hermit crab attacks a bird and eats it.

Cancer Birgus latro, or palm thief, has an impressive size. They can weigh up to 4 kg, and their length along with the limbs reaches almost a meter. Palm thieves are considered to be the largest invertebrate animals on land. They live on atolls in the Indian and Pacific oceans.

The crayfish received their name for their ability to climb trees and splinter coconuts with powerful claws.

Scientists used to know that these crayfish can eat meat, but until now it was believed that they only sometimes feed on carrion.

To see a palm thief attacking a sleeping bird, it was possible for the biologist Mark Laidre of Darmouth College in Gyu-Hampshire. From January to March 2016, the scientist was on the islands of the Chagos Archipelago in the Indian Ocean.

One night, Lyddre saw the cancer creep slowly through the tree, and began to record what was happening on the video. Cancer was selected to the sea bird – the red-necked gannet. She slept in a nest not so high from the ground. The crab grabbed her by the wing and broke the bone, after which the bird fell to the ground.

To damage a bone to a bird for these cancers is an easy task. Previously, Japanese scientists found that palm thieves compress claw with a force of 3300 N, which is comparable to the compression force of the jaw of the lion.

After the first attack, the cancer slowly descended from the tree and continued to chase the wounded bird, damaging its second wing.

Soon other crayfish joined the meal, which tore the bird apart and ate.

According to scientists, if a large number of palm thieves hunt in this way, they can pose a threat to the ecosystem of the islands. Laidre revealed the regularity: the more crayfish present on the island, the fewer birds are on them, and vice versa.

The researcher intends to install remotely controlled cameras at the entrance to the burrows of crayfish in order to see what prey they are dragging and how often they hunt birds.