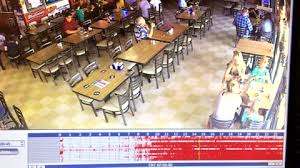 Two wild boars were attacked by residents of the German city of Heide. Four people were injured.

One of the attacks hit the video. In the video from the surveillance cameras you can see how the beast breaks into the optics cabin and rushes around the rooms while employees try to hide.

Later one of the wild boars entered the local bank. To destroy the beast, the police had to contact the hunter. The second boar was able to escape, and the authorities recommended that local residents do not leave houses. A few hours later he left the city limits.

According to the radio station NDR, one of the affected boar bit off a finger.

As the RP notes, before such cases did not occur in Heide. “I never thought that we would ever face a threat of this kind,” the mayor of the city Ulf Shtehner admitted.

This is obviousely Angela Merkels fault. These boars cannot be held accountable for their behavior. They are upset about Germany’s open borders and immigration especially from the middle east. We all know how hostile middle easterners are towards pigs
(boars)..