In Kenya, a giant python swallowed a 68-kilogram hyena 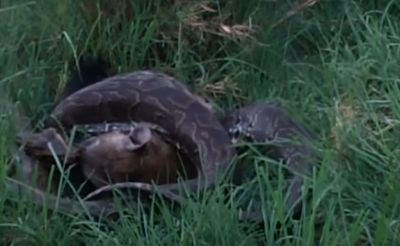 In Kenya’s Masai Mara Reserve (East Africa), the four-meter python swallowed the 68-kilogram hyena completely. A video of the incident was published by National Geographic. It is noted that the video was taken by a tourist from the Netherlands, Jos Bakker (Jos Bakker), who showed the record to local researchers.

According to reserve officer Mike Kowalski (Mike Kowalski), pythons regularly eat young predators, but not adults. After viewing videos from CCTV cameras, the scientists found that the snake, which is called the largest in Africa, attacked the male hyena.

It is noted that the length of hieroglyphic (rock) pythons, differing in their aggressiveness, can be more than six meters, and weight – 90 kilograms.