In Madrid, the invasion of parrots-monks 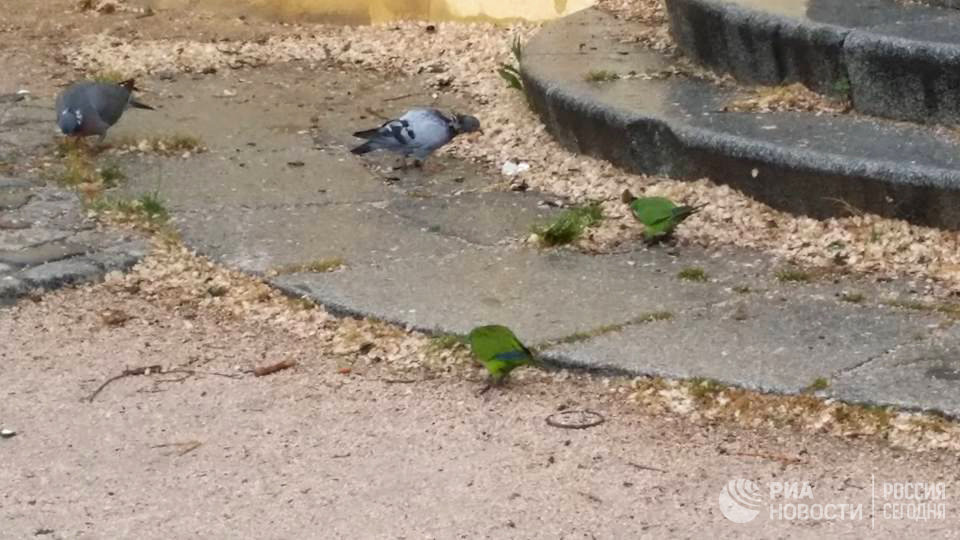 The Spanish capital can not cope with this invasion – some areas of Madrid literally flooded parrots-monks. The city authorities are developing emergency measures.

These little cute green (and seemingly innocuous) birds, brought 30 years ago to Spain from Latin America, are fighting with sparrows and pigeons for food, often winning battles and threatening to dislodge the traditional urban birds, tear out the branches of trees from which to build heavy Nests weighing up to 50 kg, sometimes even live on power lines, and their screeching cries do not allow people to sleep in entire areas.

For the first time parrots-monks (in Spain they are called Argentine parrots) appeared in the late 1970s – early 1980s in Barcelona, ​​in the mid-1980s – in Madrid. Now they have settled in many Spanish cities, but the most difficult situation has arisen in the capital, where local authorities are forced to develop another plan to combat uninvited guests. Previous – that was to destroy the nests – failed: the birds continue to multiply actively.

“It’s impossible to live here,” says a resident of the La Latina region. “They yell like crazy, we complain to the authorities, specialists come, destroy the nests, and they build new ones on the next tree.” They continue to scream and crap, “she resents.

The new emergency plan of the city authorities is to “take the necessary measures in full compliance with the legislation on cruel treatment of animals and bring the number of parrots in Madrid to an acceptable level – the minimum possible, if possible,” explained RIA Novosti in the mayoralty. In particular, the authorities are going to destroy the eggs, which once a year, in the spring, they put off parrots, and the adults are caught and “isolated” – kept in cages in special places, for example, in a zoo.

In the invasion, which the city authorities are unsuccessfully fighting, the capital residents themselves are to blame, who brought parrots from their homeland, Latin America, as pets. Because of the screech that they arranged in the apartments, they were often put out of the door – released.

The first parrots-monks were seen on the streets of the Spanish capital in 1985 in the Canillojas area. In Madrid, they clearly liked it, because they began to multiply quickly enough. By 1989 there were 12 individuals, in 1993 – 25 pairs, by 2000 – two thousand. According to the “national census” conducted by the Spanish Society of BirdLife SEO / BirdLife two years ago (the first and so far the last), half of all 20 thousand parrots-monks seen in the country live in Madrid – 10 thousand copies. However, they settle unevenly – especially not lucky residents of the area Moncloa-Aravaca, where there is a huge park Casa de Campo.

According to the census, parrots-monks live in 450 municipalities of Spain. Second place after Madrid is occupied by Barcelona, ​​the top three are Malaga.

“These birds live very long, for 20-30 years, they have three or four chicks a year, and now they have spread to almost all the big cities – except for the north of Spain and Castile and Leon,” the biologist told SEO / BirdLife Arancha Leal.

She believes that the city authorities underestimated the threat emanating from the pretty little green birds, and missed the opportunity to solve the problem on time. “At the very beginning, as soon as they appeared, they had to be caught – like any exotic species, unfortunately, they did not do it.Now it remains only to try to control the number and not allow them to get from the city to the fields where they threaten agricultural Cultures, “says the biologist.

The body length of the parrot-monk is 27-30 cm, the wing – 14-15 cm; Weight – 100 g. The color of plumage is green, the breast is pale greenish-gray with transverse bands of green color. Distributed in Brazil, Argentina, Bolivia, Paraguay and Uruguay. Places of settlement – steppes, deciduous forests, mountain slopes. This is the only species of parrots that settles on trees, arranging a nest there. In natural conditions, they live in a group of 300-500 individuals.