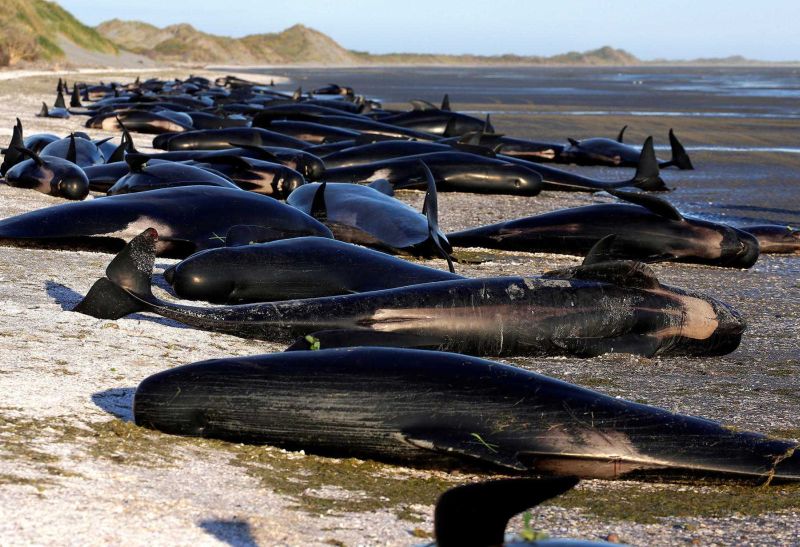 What happened in New Zealand, the tragedy has stirred the whole world. Recall that 400 ordinary grind (sometimes also called “black Dolphin”) have thrown on the shore. Some of the animals were rescued, but most of them died. Soon, about 11 km from the scene of the mass suicide occurred in the second part of the tragedy: on the beach jumped more than 200 grind. Interestingly, some of these animals have been previously saved by mammals.

The locals have done for affected animals everything. Now, however, new Zealand authorities recommend to be very careful with the bodies, because in the process of decomposition builds up gasses in them, and this can lead to explosions. “They swell because of the action of bacteria in the stomach, the intestine becomes tightly inside the carcass, and because of this, the animal explodes”, – said the Department of conservation New Zealand. Now experts pump out the gases from the corpses with the help of special needles. Explosions sometimes happen, but so far none of them caused the people no harm.

Governments can also protect dead animals by the fence to water not claimed their bodies in the direction of the nearby beaches. When a security issue is resolved, another will arise: what to do with the corpses of black dolphins? Experts believe that the wiser thing would be to take them to a special area and buried.

Ordinary Grinda – quite a large animal. Males can reach a length of 8.5 m, and their weight sometimes amounts to almost 4000 kg. Black dolphins live in flocks, which can total up to 1,000. Whales eat mostly shellfish and fish.

The main question concerns the causes of this tragedy. But scientists can not yet give a definite answer. Some experts believe that the death of animals associated with the operation of acoustic systems of warships. They caused the disorientation of the leaders of the pack that took other animals stranded.