In Thailand, a population of rare tigers 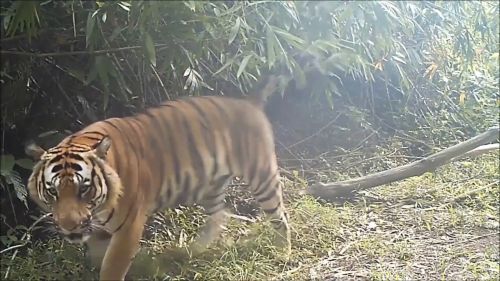 In the national park of eastern Thailand, a new population of the Indochinese tiger (Latin Panthera tigris corbetti), which is under a critical threat of extinction, was discovered by environmentalists.

According to the data from the photo traps in the jungle, it can be judged that the population is small and includes at least six cubs.

Poaching and loss of habitat have led to a reduction in the global population of this subspecies to less than 250 individuals. According to conservation workers, the improvement of the situation is associated with increased efforts to combat poaching in Thailand.

The anti-trafficking organization Freeland and Panthera and the wild cat conservation team conducted the study with the support of the Thai park authorities. Prior to this discovery, only one population of Indo-Chinese tigers, also found in the Thai national park, was known.

“This news is nothing short of a miracle,” said John Goodrich, director of the Tiger Protection Program at Panthera.

“Strengthening anti-poaching patrols and law enforcement actions have played a decisive role in preserving the tiger population by providing a safe environment for their reproduction,” noted the director of national parks in Thailand, Songtam Suxwang, adding that it is necessary to remain vigilant, since well-armed poachers still represent A serious threat.

The number of tigers in the wild has fallen from 100,000 individuals a century ago to 3,900 today, the group said in a statement.

Thailand was the first state in the region to deplete its forests to the point that by the 1980s logging was banned. He was also one of the first to establish national parks, but initially they were also subjected to illegal logging and hunting.

At that time in Cambodia, Laos, Myanmar and even in Vietnam there were many untouched forests with healthy populations of tigers. In Thailand, however, they declined so much that in the early 2000s they were considered very small and fragmented.

But since then, massive illegal exploitation has so exhausted the forests and tiger populations in other countries, even in Myanmar, that Indochinese tigers are considered extinct in Cambodia, in Laos and Vietnam they remain some miserable quantity and in the eastern part of Myanmar, less.

However, improved conservation strategies have made it possible to restore the tiny population of these cats in some parts of Thailand, although in others they have disappeared. Thus, thanks to its fairly well-managed parks, Thailand unexpectedly became the last stronghold of the Indochinese tiger.