In the Netherlands because of bird flu destroyed 190 thousand ducks 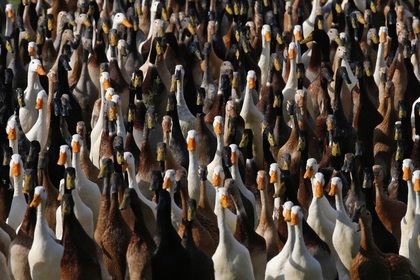 About 190 thousand domestic ducks were destroyed in the Netherlands for prevention of spread of bird flu.

Elimination was carried out on six farms after the virus was found in the settlement of Biddingkhyoyzen located in 70 kilometers to the East from Amsterdam. All farms in a radius of three kilometers are checked. The sanitary zone with a radius of 10 kilometers through which transit of poultry is forbidden is also framed.

Why the mankind risks to die from a new pandemic of a bird’s virus
Earlier the strain of flu H5N8 was shown in Denmark, Sweden, Germany and Finland. The Dutch authorities didn’t report yet what strain was recognized in Biddingkhyoyzena.

Bird flu was for the first time described by the Italian veterinarian Eduardo Perronchito in 1878 under the name “chicken typhoid”. Illness extends among birds, is transferred from birds to the person. Such strains of bird flu as H5N1, H5N9 and others are known.