In the United States seen an orange crocodile 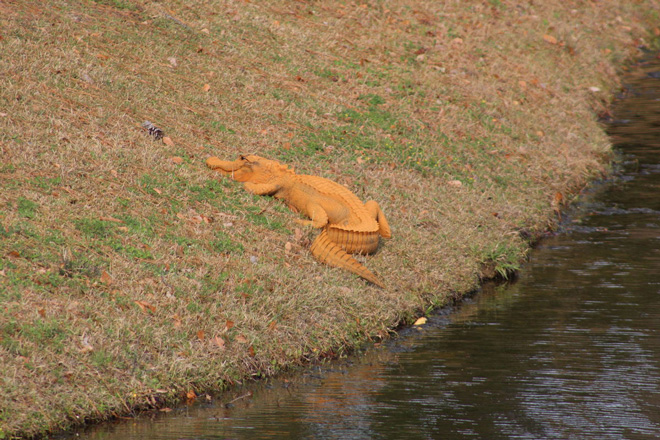 The orange crocodile was spotted in the pond city of Hanahan in North Carolina (USA). Reptile forced the citizens to beg the question: albino, or whether it is just an animal, covered with dry clay?

The second option was popular among users of Facebook, who enthusiastically commented on the post about the crocodile with bright color. This is even more likely that the surroundings of the city of Hanahan abound in clay.

The most witty put forward even more incredible hypothesis.
“I bet he used too much bronzer,” wrote one commenter.

Crocodile is noticed in the first test on Tuesday. By the evening of Thursday the orange coloration of reptiles began to fade.

Kent Vliet, specialist in biology from the University of Florida, believes that the color of the animal is the result of genetic anomalies. “I have no doubt that the animal is somewhere dirty, the scientist said. Is the color of rust”.
Albinos or crocodiles with laicismo is white. Other colors such as reddish-orange, are possible, but are typically in the form of spots. The rest of the crocodile’s body has a normal color.

Over time, painted crocodile skin will return to normal color, if the animal will not return to the place where turned orange.

But if paint still will not go, the crocodile will just take off the skin, assured Vliet.